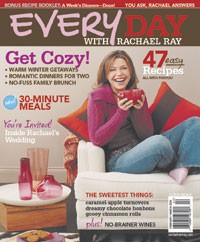 PARTY JANN: Among the many, many perks of being Jann Wenner: You can get Bruce Springsteen to play at your birthday party. The Boss is expected to be among the guests on hand to celebrate the Rolling Stone founder’s 60th Saturday night. The party is being hosted by Wenner’s wife, Jane; his boyfriend, Matt Nye, and Bette Midler and her husband, performance artist Martin von Haselberg. The hosts have rented out Le Bernardin (this week named the city’s top restaurant by New York magazine) for the event, which will feature a seated dinner for 142 as well as performances by Springsteen (although he’s not yet confirmed) and a number of other acts. “The room is going to be filled with celebrities,” said one source familiar with the arrangements. Of course, there will be some noncelebrities present in the form of various Wenner Media employees. But while they were originally invited for the whole party, once the RSVPs were tallied, some of the staffers were asked not to arrive until after 10:30 p.m. to avoid overcrowding, according to the source. A Wenner spokeswoman declined to comment.

Wenner’s three magazines – Rolling Stone, Us Weekly and Men’s Journal – will also be represented by mock-up covers with his face on them. It’s the perfect gift for that special media mogul in your life who has it all, no? – Jeff Bercovici

PEOPLE’S EVOLUTION: Martha Nelson didn’t have much time to luxuriate in her liberation from the celebrity weekly grind on Wednesday. She was too busy flying to Los Angeles to attend a long-scheduled cocktail party for People’s L.A. bureau chief, Elizabeth Leonard. But on Thursday, technically Nelson’s first day as editor of the People Group, she took a moment to discuss her newly expanded role at Time Inc. by phone from the West Coast.

“The demands of a weekly are enormous,” Nelson said. “When you’re doing that 24/7, it doesn’t give you a lot of time to think about the larger franchise. This gives me a chance to catch my breath and think imaginatively about what we can do with the brand.” She specifically mentioned the magazine’s Web site: “I’m very focused, at the moment, on People.com. I don’t know how much larger it can be, but I’d like to see.”

Nelson also said there was a schedule in place for increasing the number of People special issues and bookazines. The magazine currently has three daily spin-offs – for the Emmys, Grammys and Oscars – and its Style Watch special now comes out four times a year and is intended as a seasonal fashion guide. “We’ve seen real ad growth with Style Watch,” Nelson said, adding the People spin-off was part of a select group of titles to carry a holiday Gap insert this fall. (In addition to People, the 24-page magalogue ran only in monthlies – Vanity Fair, Vogue, In Style, Oprah, Martha Stewart Living, Lucky, Glamour and Real Simple – according to a Gap spokeswoman.)

“I want to be clear,” Nelson said, stressing that her main concern would continue to be the People flagship. “It’s not as if I’m not going to be looking at the weekly,” she said. “It’s in Larry’s hands, but I will be working with him.” Larry Hackett was named as People’s managing editor this week, replacing Nelson.

Asked about recent rumblings that there would now be a dotted editorial reporting line from In Style, which Nelson founded, to the People Group, she said, “Not at this time. Personally, I don’t feel my work at People is done yet.” Nelson did concede, though, that reporting lines could change over time. “I don’t have a blueprint for this yet.”

While most of the media attention directed at Time Inc. recently has been focused on layoffs, People has actually managed to up its head count. “We’ve hired some people over the last few months to work on the specials,” Nelson said. “It’s not a massive staff-up. There have been slow additions of key people to make it possible to do what we want to do.” Among them, assistant managing editor Cynthia Sanz is now working on special issues; Jamie Bufalino, who had been freelancing for the magazine, is now a senior editor at People, and style director Susan Kaufman hired Marisa Rubin as a fashion market editor. – Sara James

RAY’S THE ROOF: From company-wide layoffs to lazy newsstand numbers to titles folding, the magazine business hasn’t seemed like the best one to be in lately. But occasionally there is some good news. Several of the shelter and epicurean lifestyle titles launched in the past 18 months continue to outpace projections.

Every Day with Rachael Ray will up its rate base twice in 2006, to 450,000 from 350,000 with the April/May issue, and again with October/November, to 750,000 – a surprising growth spurt, even for a magazine attached to a celebrity chef with four television shows to her name. (Only Emeril Lagasse gets more face time on the Food Network.)

Every Day’s publisher Christine Guilfoyle said, “You can’t talk about the excitement of the magazine without talking about the excitement surrounding Rachael Ray. She has catapulted into the national spotlight in the past six months.” Guilfoyle added that there had already been discussions about increasing the magazine’s frequency above the planned six issues for 2006 – it’s currently scheduled to go to 10 times a year in 2007 – and said ad pages were steadily climbing from 35 in the first issue, to 47 in the second, going on sale later this month, to an expected 55 to 60 in the magazine’s third.

Meanwhile, Cottage Living is continuing its climb toward a seven-figure circulation. On Thursday, the magazine said its January/February issue would deliver a rate base of 900,000, an 80 percent increase over its September 2004 launch rate base of 500,000. Domino is also expected to up its rate base once again with the July/August issue, to 500,000 – about 25 percent of its copies are now being sold on the newsstand, which is well above the category’s average of 10 percent. And Weekend is gearing up to publish five issues in 2006, with a rate base of 300,000. – S.J.

MOSS WANTED: The British Metropolitan police have requested that Kate Moss return to the U.K. to assist in their investigation into the drug-taking allegations that threw her career into turmoil in September.

“We would like to appeal for her return, see us and tell us her side of the story,” said Tarique Ghaffur, assistant commissioner for the Metropolitan police, in an interview with The Sun tabloid on Thursday, later confirmed and repeated verbatim in a police statement. “For everybody’s sake, and for her to move on, the sooner she speaks to us, the better. We wish for the investigation to take its course, and she would be dealt with very fairly and proportionately, as would be the case with anybody else.”

Investigations into the Moss affair are making headway, according to Ghaffur, who added “the net on others involved is closing in, and there will be arrests.”

The police have already conducted searches in the studio where Moss was surreptitiously filmed purportedly snorting cocaine. They are also studying the tape from which stills were taken, then run in the Daily Mirror newspaper, causing a media frenzy.

There are no plans to seek Moss’ extradition from the U.S., where she has been since the scandal broke. Most recently, she has reportedly been on vacation on Aspen slopes.

In general, British lawmakers are publicly campaigning against drug dealing in the entertainment industry and white-collar communities. – Lucie Greene