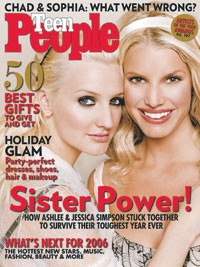 PEOPLE CHASE: Lori Majewski‘s overhaul of Teen People technically won’t make its debut until the February issue, but when the December/January cover hits newsstands later this week, don’t expect it to look much like the Teen People of recent years.

“Because I came from a weekly, I don’t want to wait [to make changes], and I can’t wait,” said Majewski, who was hired from Us Weekly to be managing editor of Teen People in August, with the goal of bringing the magazine back to its roots and realigning it with the People mother ship. (“People is having its best year in 12 years,” she said. “Why wouldn’t we want to follow that?”)

The new Teen People cover features fewer cover lines, no more neon and, for the first time posing together for a magazine (according to a Teen People spokeswoman), Ashlee and Jessica Simpson.

“It had gotten to the point where the photos were covering up the logo,” Majewski said of returning the Teen People logo to the foreground. “It was like, ‘What magazine is this?’ You know how they tell you not to wear too much eye makeup with a lot of lipstick? There was too much going on.”

Inside the issue, Jessica reveals she’s been seeing a therapist and talks about her marriage and a recent run-in with the paparazzi. And, in a sign of what to expect come February, there’s amped-up fashion and beauty coverage.
— Sara James

MILLER’S NEXT CHAPTER: Judith Miller‘s career at The New York Times is likely fait accompli, but on the upside, she’ll have more time to write that memoir she keeps talking about, and maybe even book some speaking engagements. (Earlier this month, a Times spokeswoman told The New York Post, “She has few, if any, on the calendar at this point.”)

Wonkette.com previously guessed that Miller might “get at least $50,000 a pop” for oration, but Wesley Neff — president of the Leigh Bureau, which represents, among others, the CBS producer who was fired for her role in Memogate, Mary Mapes — thought that figure a little high. “The types of groups that will be interested in [Miller] will be more of the town hall, educational forums,” he said. “Corporate clients don’t want anything too political or partisan.”

And how will the indictment of Irve Lewis “Scooter” Libby and the ongoing investigation of Karl Rove — not to mention Miller’s own turmoil at the Times — affect her appeal? Neff said controversy was a good thing, at least in this instance. “The ripple effect could be a higher price for her as a speaker,” he said.

What is Mapes commanding these days, 10 months after she was fired from “60 Minutes”? “It’s too early to say where the market’s going to be for her,” he said. “A lot of it’s going to be driven by the sales of her book [“Truth and Duty: The Press, the President, and the Privilege of Power,” which St. Martin’s Press is releasing on Nov. 8].”
— S.J.