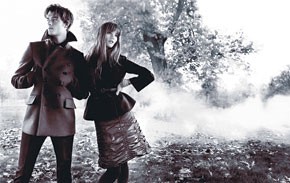 REMEMBRANCE OF GONZOS PAST: Few occasions could conceivably unite Graydon Carter, Jann Wenner and Terry McDonell — not to mention Tom Wolfe and Jimmy Buffett — or entice them to share top billing as hosts, but remembrance of Hunter S. Thompson did it. A cocktail party Wednesday evening at The Waverly Inn, hosted by the gentlemen, preceded a screening of “Gonzo,” the well-reviewed documentary on Thompson directed by Oscar winner Alex Gibney and co-produced by Carter. (And Wenner, Carter and Gibney even did Charlie Rose together.) It was, on the face of it, a nostalgic event, drawing literary and journalistic eminences such as Gay Talese, Lewis Lapham and Jay McInerney, though the ubiquitous Arianna Huffington stood in the center of it all, a reminder of what political media since Thompson’s death has become.

FREE ART: Esquire has been quiet so far in celebrating its 75th anniversary, save for reserving two special covers in February and May and page 75 of each issue to showcase years of Esquire content. For example, Esquire chose not to throw any kind of soiree during the recent Milan Men’s Fashion Week, when all the heavy-hitting retailers and designers were in town. (Could L’Uomo Vogue’s 40th anniversary bash this week in Milan have given the Esquire execs second thoughts?) “When you embark upon a yearlong celebration, you don’t want to peak too early,” explained vice president and publisher Kevin O’Malley. But some commemorative bells and whistles are already under way, to be unveiled as its October issue hits newsstands.

In print, Esquire will name the 75 most influential people of the 21st century — everyone from fashion designers to movie stars, businessmen to athletes. To bring the package to life, Esquire and Hearst commissioned Chicago-based sculptor and artist Lincoln Schatz to create a piece called “Portrait of the 21st Century,” where the subjects will create their own performance art through digital imaging and computer software. Schatz created a 10-by-10-foot translucent cube in the atrium of the Hearst Tower outfitted with 24 cameras. The subjects choose to do whatever they want for about an hour, working with Schatz to develop a narrative from their performances. The cameras feed images of the performances to 24 different computers, which then select the images randomly in a procession of overlapping videos.

Subjects who have already sat for the project include Marc Jacobs, who practiced yoga with his trainer, and Harvard Law professor Noah Feldman, who plays with his son during his time in the cube. Architect Santiago Calatrava painted watercolors, and James Beard Award-winning chef David Chang, according to Schatz, “wanted to get wasted in the cube” — so he drank a case of Pabst Blue Ribbon with three of his chefs. Amazon founder Jeff Bezos read a friend’s manuscript on his Kindle while George Clooney, who caused quite a ruckus at the Hearst Tower when he arrived to “perform” in the cube, danced with 10 different women — including O, the Oprah Magazine editor at large Gayle King — to a variety of Frank Sinatra songs. Danger Mouse, Dr. Mehmet Oz and M.I.A. also have participated in the project so far. There is talk of eventually exhibiting the piece at a museum.

As for what else can be expected in the anniversary issue, editor in chief David Granger said it will not stay focused on the past. “We’re at a fulcrum point in our culture, not just because of the election, but because the world seems to be at a real tipping point right now. We have major pieces on a number of people who we think are important to the beginning of this century, and issue-oriented pieces on ideas that are of this moment and of the next couple years.” The cover subject for that issue, Granger said, will not be a person. Two more covers inspired by Esquire’s archives are expected in August and November. Here’s hoping history doesn’t repeat itself — the February and May archive-inspired covers have been the lowest-selling issues on newsstands so far this year, according to Audit Bureau of Circulations’ Rapid Report.

BURBERRY’S NEW COUPLE: There’s once again a distinctly British feel to Burberry’s fall campaign — and this time the brand’s men’s wear is shining just as much as its women’s collection. Christopher Bailey, the brand’s creative director, has tapped actor Sam Riley — who starred as Joy Division’s Ian Curtis in the 2007 film “Control” — to appear in the campaign alongside British model Rosie Huntingdon-Whiteley. The duo is pictured in a series of moody black-and-white images lensed by Mario Testino in London’s leafy Kensington Gardens. In one shot, Riley shields himself and Huntingdon-Whiteley against the elements with a duffle coat, while in another he poses in a skinny black suit. “Sam is a really talented actor….When I saw him in ‘Control,’ he just completely blew me away and [he] just felt like a perfect fit for Burberry and the mood of this campaign,” said Bailey.

The images also spotlight the brand’s Lowry handbag in ruched leather, which Bailey named after the late English artist, alongside the label’s new jewelry pieces.

And, while she’s not a part of Burberry’s mainline campaign this season, Agyness Deyn, a high-profile face of the brand, will continue to be featured in the label’s Burberry The Beat fragrance ads this year, Bailey said. “Agyness is a huge part of the Burberry family and a personal friend,” he added.

Burberry’s fall campaign will break in August issues of international magazines, set to be published early next month. In addition to the images, visitors to Burberry’s Web site will be able to view behind-the-scenes film footage of the shoot from July 1.

MULTIPLE MEISELS: What do Vera Wang, Gianfranco Ferré, Pringle of Scotland and Missoni have in common? Well, for fall, Steven Meisel. All four fashion houses asked the photographer to shoot their ad campaigns for the season.

Meisel shot Stella Tennant for the Wang ads. “I chose to work with Steven Meisel because of his ability to photograph women so beautifully,” Wang said. “He was able to balance the rich texture, color and glamour of the collection with a languid, leisurely mood.”

Ronnie Cook Newhouse led the campaign’s creative direction, and Stephen Wolstenholme of House+Holme was also on hand for the shoot at an Upper East Side apartment. The ads will appear in September issues of Vogue, W, Harper’s Bazaar, Elle and T, to name a few.

Meanwhile, after featuring colorful images that had an ethereal, dreamlike and mysterious quality to them for spring, Pringle’s fall campaign is returning to an edgier, more modern take. The brand’s new campaign features models Matt Gordon and Sasha Pivovarova — who was picked because she is a favorite of creative director Clare Waight Keller (and she was available after being released from her Prada contract). Keller also brought in Fabien Baron and Karl Templer to style the campaign. “…I wanted to reference the work of great British photographers and pay homage to Terence Donovan and David Bailey,” said Keller. The black-and-white ads will break in select September magazines.

At Missoni, which features Iselin Steiro, Kinga Rajzak and Mathias Lauridsen, inspiration came from the Bernardo Bertolucci film, “The Conformist.” “This film is so aesthetically compelling to me. In it, Bertolucci and cinematographer Vittorio Storaro create an astounding combination of visual patterns and textures that felt very Missoni — a sort of color-tinted, supersophisticated film noir that I felt worked very well with the mood of the fall-winter 2008 collection,” said Angela Missoni. Over at Ferré, a spokeswoman noted that the fall campaign is the first step toward the company’s future direction that will be carried on by Tommaso Aquilano and Roberto Rimondi of 6267. The images convey a multicharacter story set seductively in the Forties, featuring models Julia Stegner, Malgosia and Javier de Miguel.