It looks as if the British fashion title Harpers & Queen is set to dethrone the monarch. 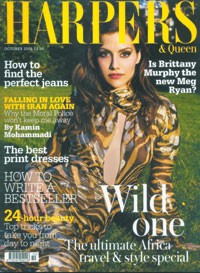 ROYAL SEND-OFF: It looks as if the British fashion title Harpers & Queen is set to dethrone the monarch. Industry sources on both sides of the Atlantic say the magazine will ditch the “Queen” and change its name to Harper’s Bazaar, just like its stateside cousin, as of the February or March issue. In Paris and elsewhere, the magazine’s principals are talking openly about the change. In Paris this week, one laughed at the crack “Queens are out!” while another recently announced to fellow cocktail party guests that the magazine’s name would be changed as of the March issue. Despite all those loose lips, however, the company is keeping mum for the moment. A spokeswoman for the Hearst subsidiary National Magazines in London declined comment.
— Miles Socha and Samantha Conti

FAMILY TIES, SEVERED: The culling continues at Family Circle under new owner Meredith Corp. and new editor in chief Linda Fears. Nine staffers from the editorial and photo departments were quietly let go on Sept. 29 as part of what a spokesman termed a “restructuring.” Those terminated were all holdovers hired by former editor in chief Susan Ungaro, who was ousted in August after 11 years running the magazine. The axed employees received payouts that “represented an enhanced benefit over our normal severance benefits,” added the spokesman.
— Jeff Bercovici

MAN POWER: The new crop of men’s magazines is feeling bullish. Best Life and Cargo both said this week they will ramp up circulation in 2006. Best Life, which started last year as a Men’s Health spin-off, will jack up its rate base from 300,000 to 400,000 with the February issue. It will also publish 10 issues next year, up from seven this year. Cargo, the men’s shopping title published by Condé Nast (parent of WWD), is upping its rate base from 350,000 to 400,000, also in February. The moves follow last week’s news that Men’s Vogue has been upgraded from test to full-scale launch.
— J.B.