The fashion world may be enamored with bloggers — but not when they post future advertising images without permission. 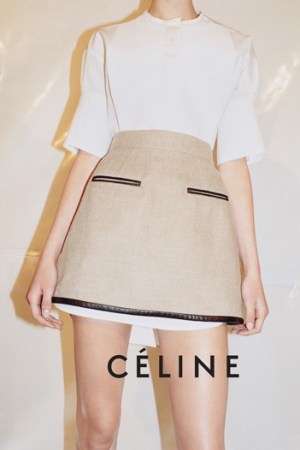 SAVING FACE: The fashion world may be enamored with bloggers — but not when they post future advertising images without permission. Images from the spring-summer campaigns from the likes of Dior, Balenciaga, Celine and others have been circulating on Modelinia, Fashionologie and other sites this week, ahead of their appearances in February magazines, causing puzzlement and consternation at some design houses. Fingers have also been pointed at the new blog of Love magazine, which acknowledged some ads — including those of Loewe and Givenchy — were posted with the blessing of designers, while others were snatched from fellow blogs. “This was a genuine human error, made in enthusiasm, and it was certainly never our intention to upset anyone, in particular designers we hold in such high esteem,” Love editor in chief Katie Grand said, assuring “practical steps have been taken to ensure no unauthorized campaign content can appear on the blog at any point in the future.”

Meanwhile, no famous faces were revealed chez Celine. Instead, for the French house’s first campaign in a year, designer Phoebe Philo kept faces out of the frame altogether to emphasize the intricate details and heighten the subtle luxury of her debut runway collection for spring-summer. Juergen Teller shot the campaign in London last October in his unblinking style, using a variety of models: Carmen Kass, Lisanne de Jong, Jacquelyn Jablonski and Valerija Kelava. Kass may be visible in a forthcoming spot focusing on Celine’s eyewear. The media budget was not disclosed, but was characterized as well above 2008 levels and destined for titles throughout Asia, the Middle East and Europe. In the U.S., Vogue, W and Harper’s Bazaar will carry the spots.

POPULAR COUPLE: One knew but still went ahead with it, while one claims he didn’t. In either case, it’s unclear what’s next in the growing furor over the use of images of President Barack and First Lady Michelle Obama in ads for Weatherproof and the People for the Ethical Treatment of Animals, respectively.

For now, Weatherproof can keep its billboard up in Times Square showing the President in one of the company’s jackets on the Great Wall of China. Freddie Stollmack, president of Weatherproof, was playing “telephone tag” with the White House on Thursday but hadn’t heard back by press time. Stollmack told WWD he was previously unaware he needed to contact the White House to use the President’s image on the billboard, adding he thought a payment to the Associated Press for the image was all that was necessary. (The AP contract does stipulate, however, that approval from the subject in the photo must be gained by the organization using the image for commercial purposes.) “The White House has a long-standing policy disapproving of the use of the President and First Family’s name and likeness for advertising purposes,” said Bill Burton, White House deputy press secretary, in an e-mail to WWD.

As for the AP, a spokesman said the issue was between the outerwear firm and the White House.

In addition to the billboard, the ad was offered to The New York Times, New York Post and WWD, all of whom rejected it.

But while Stollmack said he was unaware of the White House’s policy, a PETA official said the group totally knew about it — and decided to ignore it. The organization this week used an image of the First Lady in a “Fur-Free and Fabulous” ad, alongside Oprah Winfrey, Tyra Banks and Carrie Underwood. Ingrid Newkirk, PETA’s president, said the First Lady’s office confirmed several months ago in an e-mail responding to a question posed by the group that Michelle Obama does not wear fur. On the basis of that alleged confirmation, Newkirk said PETA felt it was within its rights to use Obama’s image in the ad, which is being displayed on a van sponsored by PETA, which is handing out hot cocoa in the Washington area, and in print ads in Washington metro stations. Newkirk said the White House legal counsel’s office recently called about the ad campaign but did not threaten legal action at the time. “The White House legal counsel’s office called us to point out they couldn’t promote, fund or endorse the campaign,” said Newkirk. “I pointed out to them that we understood that, which is why we never asked them.” Newkirk maintained PETA’s ad campaign is not for fund-raising but to raise awareness, which is why she felt the organization did not need White House permission.

For now, Newkirk said PETA has no plans of discontinuing the ad campaign, despite the call from the White House. Meanwhile, the White House is said to have contacted PETA and asked them to stop using the advertisements because they are misleading and suggest the approval or endorsement of the President, First Family or the White House, which they did not receive.

FORBES SELLS ANOTHER ASSET: Forbes has agreed to sell its Manhattan headquarters at 60 Fifth Avenue to New York University for an undisclosed sum, although reports last month had a potential sale price of $55 million. The transaction with NYU was done with no real estate agent and Forbes will remain in the building as a tenant, under a five-year leaseback agreement. The company moved into 60 Fifth Avenue in 1962. “Selling our building to New York University is gratifying and appropriate,” said Steve Forbes, chairman and chief executive of Forbes and editor in chief of Forbes magazine. The sale infuses some cash into the company, which posted a 30 percent drop in ad pages last year at its flagship title, laid off approximately 100 workers and auctioned its wine collection.