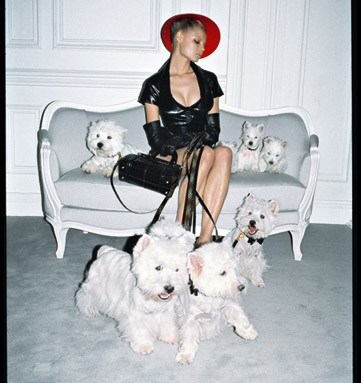 ANOTHER COMEBACK: Walter Pfeiffer, the cult, Zurich-born art photographer, is having another renaissance — this time as a fashion photographer. At 63, Pfeiffer has just completed two editorials for French Vogue, with one photo landing on the June cover. “I am an artist who by coincidence came into vogue,” he mused. Having recently done editorial work for I-D magazine and Vogue Homme, Pfeiffer is now in demand and applying his style as an artist, illustrator and filmmaker to the fashion realm. “I have always surrounded myself with beautiful and creative people. I see beauty everyday — it can be a person or a landscape or an object,” he said.

For the French Vogue shoot with models Eva Herzigova and Magdalena Frackowiak at the Meurice hotel, Pfeiffer stripped away artifice for high-octane images, often with an off-kilter crop. “I am classical but experimental in my work,” said Pfeiffer, who still uses a Contax medium-format 35 mm camera, “I don’t do digital.”

Pfeiffer’s old-school technique produces greater realism in the images, as the zeitgeist returns to more natural beauty and wearable fashions.

“I don’t want to shoot hundreds of film, I have it after four clicks,” he said. Indeed, Herzigova remarked Pfeiffer’s rapid-fire approach was reminiscent of the late photo great Helmut Newton.

Pfeiffer’s interest in fashion was crystallized at a young age. “I would go to the library and leaf through Harper’s Bazaar and U.S. Vogue and look at the beautiful images — I always had style and a feeling for fashion,” he said.

However, Pfeiffer became a graphic designer, then an illustrator and followed this up with his now cult homoerotic photos taken in the Seventies.

There has been an exhibition at the Swiss Fotomuseum Winterthur in Zurich and he has five books to his name. The latest is a retrospective entitled “In love with Beauty,” published at the end of 2008 by Steidl. “I am a one-man band. I like to do it mostly myself,” he chirped. Still, Pfeiffer has signed up with the agency Art + Commerce and is with Paris-based contemporary art gallery, Baumet Sultana.

He’s also returning to one of his first loves, drawing, “Next I am going to publish a book of my drawings,” he said, then quickly added, “maybe the phone will ring tomorrow for another shoot.”

BIG IN TEXAS: New York Post Page Six editor Paula Froelich and her book, “Mercury in Retrograde,” were the toast of Dallas socials Thursday evening at the Rosewood Mansion at Turtle Creek. “I’m meeting Paula in New York and she’s going to write a book about Dallas and you’re in it, and you’re in it,” joked Trisha Boulogne, who hosted the party with friends Gigi Howard and Kim Schlegel Whitman. Bragged Howard, “We invited 75 people, and we had 100 and sold 85 books. We don’t mess around.” Apparently, Froelich doesn’t either. She’s already made a deal with MTV for an animated series based on her experiences in high school in Kentucky. “It was pretty interesting being Jewish at a convent school,” Froelich said. “I was practically the only virgin in my graduating class.” Among the guests orbiting the author were Jeanne Marie Clossey, Myrna and Kari Schlegel, Jamie and Melbourne O’Banion, Tina Craig, Elizabeth Wimpress and Susan Posnick.

FEWER HEADS: Time Inc. last week rejiggered its News Business Unit, which includes Time, Fortune, Sports Illustrated and Money when it moved executive vice president John Squires out to a new assignment heading up digital initiatives. With Squires out, the division’s top two top executives — president Mark Ford and Vivek Shaw, who heads the group’s Web sales effort — now report directly to Time chief Ann Moore. The move struck some as a power play by Moore to take more direct control over core company titles, while the Wall Street Journal’s Web site reported clashes among the News group’s top executives lead to the change. Indeed, some insiders said there were too many executives trying to take charge. And with Squires moved aside, Thursday brought more changes to the fold, with Andy Blau, who is the chief executive of Life.com and worked in corporate sales, returning to the News group as senior vice president, and group general manager. Blau has previously worked with the news titles among his many roles at Time. He succeeds John Reuter, who will be moved to Time’s corporate strategy and development department.