It's widely acknowledged that gossip columnists have a symbiotic relationship with B-list stars. 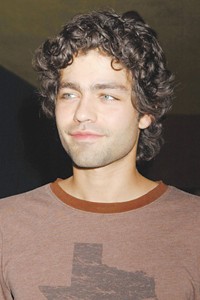 THE OVEREXPOSURE INDEX: It’s widely acknowledged that gossip columnists have a symbiotic relationship with B-list stars. For instance, a columnist can turn a mediocre event into a legitimate item as long as the list of attendees is padded with boldface names, no matter how tenuous their connection to fame. In turn, if the B-list star possesses enough talent or cunning, he or she can use the columns to reach A-list status — at which point the star’s publicist immediately begins trying to keep the client’s name out of the papers.

More often, though, the two camps feed each other until the usefulness of mentioning the actor or musician or what have you ebbs, and the gossip columnists simply move on to someone else.

Lately, that someone has been “Entourage” star Adrian Grenier. A typical Page Six item from this summer began, “‘Entourage’ star Adrian Grenier’s potluck picnic in Central Park’s Sheep Meadow the other afternoon turned into a full-blown party. Grenier and his rock ‘n’ ukulele band, The Honey Brothers, performed jokey tunes like ‘I Feel Gay’ and ‘Monkeywrencher Love Song’ while their friends played four simultaneous games of Twister … ”

Earlier this week, Grenier appears to have made his debut in the New York Daily News’ Rush & Molloy column with this item: “‘Entourage’ star Adrian Grenier told Corcoran Group ceo Pam Liebman he never watches TV. His mom, Karesse Grenier, is a broker there.” Clearly, having a mother at one of New York City’s biggest real estate firms has something to do with Grenier’s appeal, at least among certain columnists in Manhattan.

Here, the latest installment of the Overexposure Index comparing how Grenier stacks up against former gossip column regulars Moby and Stephen Dorff, whose mentions have dwindled a bit of late, for whatever reason.
— Sara James

VERTICAL’S LEAP: What if you could start an independent magazine using the resources and expertise of a big publishing company? Well, you can’t, but the company that publishes Giant magazine, Vertical Media, is offering what it hopes will prove the next best thing. On Thursday, Vertical signed a “management services contract” with Breathe, a year-old lifestyle title aimed at women who practice yoga. Under the deal, Vertical will take control of all of Breathe’s business side operations, including advertising sales, circulation and purchasing. In return, Vertical will receive an undisclosed fee and a small equity stake in Breathe, which has a circulation of 100,000. “There’s a lot of really smart elements to this business that were underleveraged before,” said Jamie Hooper, Vertical’s founder and president.

A former publisher of Maxim and Stuff who started Giant in 2004, Hooper got the idea for offering management services from his father-in-law, Mort Meyerson, a venture capitalist and former chief executive officer of Electronic Data Systems. “This is basically for independent magazines what EDS was for computer systems,” he said. “It’s a model that’s being done in a million businesses, but not in magazines.” Breathe was a logical first client: Meyerson, who is bankrolling Giant’s launch, is a minority investor in the title.

Outsourcing may create efficiency, but it also creates redundancy. Deanna Brown, Breathe’s ceo and founder, has left the company, and Paula Watson, its chief financial officer and general manager, will be gone after this week.
— Jeff Bercovici