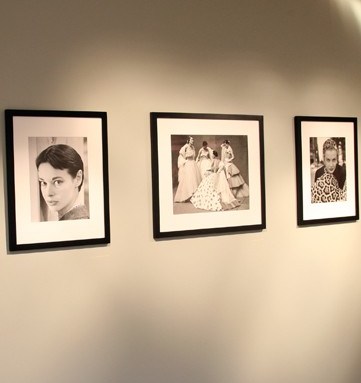 THE PARKS PORTFOLIO: Roberto Rossellini and Ingrid Bergman were wary of being photographed by Gordon Parks. The young photographer took his first trip to Italy in 1949, to the set of “Stromboli,” where he spent the first day there observing the artists — but by the next he had won them over. His shots from that time — including the black-and-white portrait of Bergman trying to avoid a staring group of Sicilian women — are illustrative of his process with anyone before his lens, from Muhammad Ali and Malcolm X, to Gloria Vanderbilt and Marilyn Monroe. Known by many as a former photographer for Vogue, followed by a long career at Life magazine, an exhibit of Parks’ work debuts today at the Gallery at Hermès. The exhibition is curated by Peter W. Kunhardt Jr., who is the assistant director of the Gordon Parks Foundation and Meserve-Kunhardt Foundation, and the grandson of former Life managing editor Philip B. Kunhardt Jr. “I came to know Gordon very well,” said Kunhardt, who went to Parks’ apartment after he died three years ago to gather all of his old photographs. “He was a Renaissance man, easily going from one thing to the next.” In addition to photography, Parks was a writer and directed the films “Shaft” and “The Learning Tree.” For the Hermès show, Kunhardt has put together a thematic exhibit of 42 photos involving fashion, artists, Life essays, civil rights workers, residents of Harlem, and Parks’ early life in Fort Scott, Kan. The exhibit will run until June 30. — Amy Wicks

RDA SEES LOSS: Reader’s Digest Association reported a $462 million loss for the third quarter, compared with a loss of $53.6 million during the same period the prior year. RDA hasn’t finalized its interim impairment analysis yet but it has recorded an estimated noncash asset impairment charge of $527.1 million. Revenues during the quarter fell almost 17 percent, to $479.1 million, and the company reported an operating loss of $535.9 million, versus $8.2 million in the third quarter of 2008. — A.W.

Giving a bit more detail about W’s readers, Nina Lawrence, the title’s vice president and publisher, said that starting in October 2008, the luxury market was hit harder than total U.S. retail sales, a trend that continued through April. In a new study on what luxury fashion consumers are thinking now, W found that during the last six months, most designer fashion purchases (80 percent) were made “on sale.” And sales are creating “addicts,” but so far, they are not damaging luxury’s value. — A.W.

BONJOUR GRAZIA, AU REVOIR MIXTE: It’s a case of “one in, one out” at Mondadori France, which is closing its monthly fashion title Mixte but is gearing up for the fall launch of its weekly magazine Grazia in France. While Mixte’s closure hasn’t been announced officially, pending negotiations with unions, a spokeswoman said the June/July issue, which hits newsstands May 26, would be its final edition. Founded in 1998, the magazine, which costs 5 euros, or $6.80 at current exchange, is billed as offering avant-garde features on luxury fashion, beauty, trends and design, with a circulation of around 50,300. With 25 million euros, or $33 million, invested into Grazia’s French introduction, Mondadori has set higher targets for the title. It’s aiming for a circulation of 170,000 copies plus first-year sales of 40 million to 45 million euros, or $53 million to $59 million. “Grazia is a great high-end magazine with a very innovative concept totally adapted to the French market,” asserted Ernesto Mauri, president of Mondadori France. The 108-page first issue, expected to cost around 2 euros, or $2.60, is to feature fashion, beauty and personality columns. Mondadori could not be reach for comment on Mixte’s closure. The group, which publishes more than 30 other titles, including Closer, Biba and AutoPlus, is present in 11 countries, including India and China. — Chantal Goupil and Ellen Groves