THE SIMPLEST FORM OF FLATTERY: No magazine designer with any sense sets out on a new project without looking to see what the competition is doing and reinterpreting the best bits. But even people for whom such "inspiration" is a way... 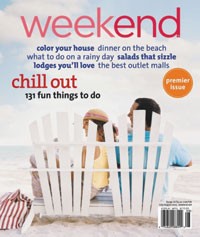 THE SIMPLEST FORM OF FLATTERY: No magazine designer with any sense sets out on a new project without looking to see what the competition is doing and reinterpreting the best bits. But even people for whom such “inspiration” is a way of life have been surprised to see how much Weekend, Hearst’s new women’s magazine, looks like Real Simple, the five-year-old title from Time Inc. The resemblance is striking, from the trim size to the “slab-serif” fonts to the heavy cover stock with matte finish to the two-tone logos. And that’s just the cover.

“It’s like they’ve taken the visual DNA of Real Simple and transported it,” said Robert Newman, Real Simple’s former creative director. (He’s now design director of Fortune, which, like Real Simple, is part of Time Inc.) “It’s incredible. If you show this to anybody, they would say it looks like Real Simple.”

“This is about as similar as I’ve seen two unrelated magazines look,” agreed consultant Michael Grossman, who also worked on Real Simple and is currently creative director of Absolute. However, he hedged, “magazine designs do follow trends. I’d give them a chance to find their own identity.”

The situation calls to mind last year’s showdown between Rodale and American Media over a Men’s Fitness redesign that made it look suspiciously like Men’s Health. In that case, the threat of legal action was enough to get Men’s Fitness to back down. Will Time Inc. take a similar tack? “It’s really premature and impossible to comment because we haven’t seen the magazine yet,” said a Time Inc. spokesman, noting that Weekend isn’t on sale until next week.

But, should it come to that, Hearst will have a hard time convincing anyone the resemblance is a mere coincidence. That’s because Susan Wyland, Weekend’s editor in chief, was also the founding editor of Real Simple. “That makes for a compelling opening statement for the plaintiff’s attorney,” said Lloyd Jassin, a New York-based lawyer who specializes in trademark law. “It carries weight in terms of making an argument to the jury that this was done with knowledge.”

But couldn’t Hearst simply say that Wyland’s consistent tastes would inevitably lead her to create similar-looking magazines? In fact, that’s exactly what a Hearst spokeswoman suggested in a statement Thursday. “Susan Wyland was one of the pioneers of the women’s lifestyle category and the move toward magazines using cleaner design and a more contemporary aesthetic. Weekend’s look reflects both her personal style and the level of sophistication that consumers have come to expect.”

But that argument won’t do Hearst any good in a court fight, said Jonathan Kirsch, a Los Angeles-based publishing lawyer. “If there are intellectual property rights in the work product, almost without question the rights would belong to the employer [i.e. Time Inc.],” he said.

BON VOYAGE, BAZAAR: Two high-ranking editors handed in their notice at Harper’s Bazaar this week: market director Amanda Ross and bookings director Preston Davis. Ross has worked alongside Bazaar editor in chief Glenda Bailey for the past eight years, including four at Marie Claire. She’s moving to Los Angeles to be with her fiance, Jim Rosenfield. Davis, who’s been at Bazaar for four years, is leaving to pursue other projects, according to a Hearst spokeswoman, who added that both are planning to stay until August in order to complete work on the September issue.
— J.B.

PULLING THE PLUGG: Getting people all hot and bothered is considered an acceptable method for marketing jeans — unless your customers are adolescent girls. A number of teen magazines recently deemed Plugg Jeans Co.’s fall ads, which are slated to run in August and September issues, too sexy to print. The ad features a glistening, tattooed couple erotically intertwined, with the woman’s hand nestled between the man’s upper thighs. Magazines including Teen People, Cosmogirl, Elle Girl and Seventeen told Plugg they needed to present a tamer image.

“It’s extremely provocative and the original creative was not in line with our standards,” said Deborah Burns, publisher of Elle Girl. “We serve a young, impressionable audience from our editorial and advertising pages, and that message just wasn’t appropriate.” Burns added that she turned down Plugg’s second attempt and finally settled on a retouched third version.

“It was definitely a pleasant surprise to see the reaction to the ad, which I don’t think was risque,” said Johnny Kirpalani, president of Plugg. “It’s just an attention-grabber.”
— Lauren DeCarlo