Tiger Woods Bares All… Kelly Cutrone, By the Book…

Tiger Woods is wearing nothing but a hat while lifting weights on the February cover of Vanity Fair. 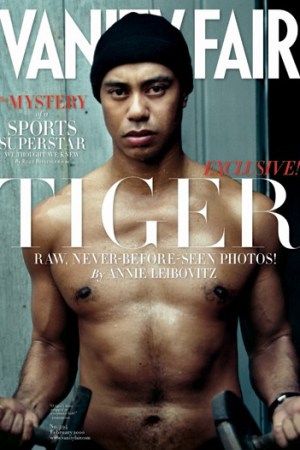 TIGER BARES ALL: Yet another view of Tiger Woods emerges — perhaps the side his multitude of mistresses are more familiar with — on the February cover of Vanity Fair, which shows the much-maligned golfer wearing nothing but a hat while lifting weights. Of the growing list of regrets Woods would like to take back, posing semi-nude for Annie Leibovitz back in January 2006 is perhaps one of them. That shoot and others allowed the famed celebrity photographer to open up her archive and provide Vanity Fair with some never-before-seen raw shots of Woods, with at least one image credited to Men’s Vogue — long before Tiger was known as such a tiger. Inside the issue, which hits newsstands Wednesday, Buzz Bissinger, author of “Friday Night Lights,” ponders Woods’ downfall and what his future may hold. — Amy Wicks

KELL HATH NO FURY: Publicist and MTV reality star Kelly Cutrone is wasting no time in kicking her brands (including her p.r. firm People’s Revolution and, increasingly, Kelly Cutrone herself) into high gear in 2010. In addition to debuting her own Bravo reality series, “Kell on Earth,” on Feb. 1, Cutrone’s first self-help tome, entitled “If You Have to Cry, Go Outside…And Other Things Your Mother Never Told You,” will be released by HarperOne, the touchy-feely imprint of HarperCollins (Deepak Chopra is a label mate), on Feb. 2.

Cutrone, who is 44 years old and a mother of one, was approached to write a book by a young Harper editor who was also a fan of “The Hills.” It didn’t take much convincing, especially when Cutrone realized the type of book she would be able to author. “I felt like there’s a lot of confusion about what it means to be feminine,” she said. “I wanted to write a book that reached out to young women.” To do so, Cutrone polled her People’s Revolution interns in a “marketing study” to find out exactly what “if you were going to read a book by me, you would want to hear about,” (responses included how she got her start, being a single mom and dealing with sexism) and enlisted Meredith Bryan, the author of a 2008 New York Observer profile on Cutrone, to cowrite the book in five months.

Punctuated with aphoristic chapters such as “It’s Not a Break Down, It’s a Breakthrough” and “A Bitch Is Not a Bad Word,” “If You Have to Cry…” is also full of Cutrone’s urgings to up-and-comers to “awaken to your inner voice,” to “gather up your courage like an armful of free clothes at a McQueen sample sale,” and “celebrate the magic inside of yourself,” Cutrone explained, quoting from her introduction, “Are You There, Babe? It’s Me, Your Soul.”

Not that there aren’t revealing moments in the book, not to mention some good dirt. “It’s kind of like the good, the bad and the ugly,” Cutrone said. “It covers everything from marriages to relationships to jobs to….Even Ashley Dupré makes a little appearance in my book.” In that passage, Cutrone recalls being dismissed by Yigal Azrouël after seating everyone’s favorite call girl in the front row of the designer’s fall 2009 show: “[The night I was fired,] I called another one of my clients, Jeremy Scott, and told him to please make me a T-shirt that said, ‘What Would Madonna Do?’” Cutrone said, reading from a manuscript. “‘Oh please, I don’t need to make you a T-shirt,’ Jeremy replied. ‘Madonna would have grabbed that girl by her ponytail, made out with her and said, ‘Why are you talking about my girlfriend like that?’ And suddenly I realized that I hadn’t maximized my moment.”

Sounds like fun, though Cutrone admits the timetable and, sometimes, the writing process, wasn’t. “I was already prepping for [New York] fashion week and shooting two TV shows [MTV’s “The City” and her own Bravo show] and running three offices” when she began the book in June, she said. Which raises the question: Is the p.r. business still where it’s at for Cutrone, who now has a team of lawyers and agents, at William Morris Endeavor and International Creative Management, who represent her for everything from public speaking to producing and branding? Cutrone seemed to bristle at the implications. “P.r. is what I know how to do to make money and it’s what I’m really good at,” she said. “I think it’s a natural thing to say, ‘Oh, OK. Well, now Kelly Cutrone has to leave p.r., but that would be an old model and I’m not really interested in old models….Do I want to stick around when I’m making a fortune writing books and producing television, taking s–t from a designer who pays $6,000 a month who doesn’t want to pay their bills for three months? No. Does being on TV and writing books give me the freedom to kick their asses out of my office before they f–k me over? Yeah. That’s the reality.”

Well, reality television, at least. With respect to “Kell on Earth” — which also makes “characters” of People’s Revolution staff such as equity partners Robyn Berkley and Emily Bungert — Cutrone sees her increasing profile as a value-added. Belying her shoot-ya-straight, layperson m.o., here Cutrone talked of “distributing content directly to the homes of America — we’ve eliminated the retailer and we’ve eliminated the magazine” and bridging the gap “between traditional and nontraditional media” at no cost to her p.r. clients, 70 percent of whom, Cutrone estimated, agreed to appear on camera.

As to whether Cutrone, who will be promoting both her book (with at least one Barnes & Noble in-store appearance) and Bravo show (everywhere) this month in addition to running her company, has given any thought to hiring a publicist of her own, it comes down to one question. “First of all, who would I hire?” Cutrone asked. “And secondly, I’m not going to call a friend of mine at Vanity Fair and be like, ‘Yo, I think it’s really time for me to be a Fanfare [feature subject]’ — I’m just not going to do that. I think that being on Bravo and being on MTV and everything — having that is enough p.r.”