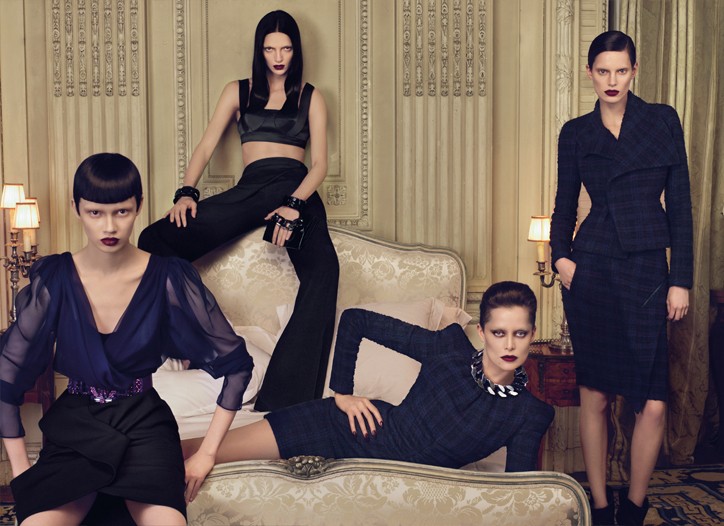 ALL IN THE FAMILY: His fetish model Mariacarla Boscono remains part of the picture, but otherwise, Riccardo Tisci is forging a new path with Givenchy’s advertising. After nine seasons collaborating with Inez van Lamsweerde and Vinoodh Matadin, Tisci tapped Mert Alas and Marcus Piggott for Givenchy’s fall-winter campaign, which features color photography, unexpected faces and a stronger French accent. It is slated to break in the July issue of L’Uomo Vogue for men’s wear and French Vogue’s August issue for women’s ready-to-wear. “It’s a new step,” Tisci said. “I wanted to give this feeling of going from a studio to reality. It’s important to give reality to women.”

Among the fierce and exotic beauties burning intensely from a gilded bedroom in the Château de Ferrières is Leonor Scherrer, daughter of retired couturier Jean-Louis Scherrer. “I’m completely in love with her,” Tisci enthused. “For me, she represents France in all senses: the elegance, the aristocracy, the darkness of France.” The stern-looking models Iris Strubegger and Ranya Mordanova fit Givenchy’s touch-chic mould: More surprising is Adriana Lima, who trades her Victoria’s Secret sexpot look for hard glamour, sprawled over a bed with the latest Givenchy bag, yet to be named. The campaign features separate visuals for eyewear and watches, while a trio of male models in naval-inspired fashions and glitter boots channel Tisci’s new Latin-inflected vision for men.

Meanwhile, Tisci’s costume design duties continue to grow. The designer said he’s creating new looks for Madonna’s ongoing tour, and also for Antony Hegarty of Antony and the Johnsons as the band tours Europe this summer. Tisci described his creations for Antony as “men’s, women’s and couture all together” for a singer who is “between Klaus Nomi and Edith Piaf. His energy is so strong,” he enthused. — Miles Socha


KURT’S QUICK TURN: Kurt Andersen’s late March cover story in the magazine, “The End of Excess: Is This Crisis Good for America?” has already been turned into a book, to be published by Random House. The book, “Reset: How This Crisis Can Restore Our Values and Renew America,” is now available for preorder, with a July release date. Tom Brokaw is contributing a foreword.

Let it not be said the publishing industry is not nimble: Andersen told WWD late last week he was approached after the story appeared with the suggestion of expanding on it, and that he had put the finishing touches on the manuscript “10 minutes ago.” He said the book would be slightly more forward-looking and hopeful than the story, which compared Americans to “substance abusers coming off a long bender, hitting bottom (we can only hope) and taking the messes we’ve made as a sobering wake-up call.”

Random House describes “Reset” as “a small book with hopes as big as the country it explains, scolds and celebrates” that is “bound to be on night tables and Kindles, in backpacks and purses.” It’s 96 pages — a departure for Andersen: both of his most recent books, the novels “Turn of the Century” and “Heyday,” were more than 600 pages each and published eight years apart. — I.C.

COVER QUEEN: Condé Nast Traveler’s September issue usually features famous faces on its cover. Past celebrities have included Matt Damon, Bill Clinton and Ashley Judd. This year, Queen Rania will be on the cover of the September Power of Travel issue. The edition will outline places, people and ideas shaping travel and its impact on art, culture, fashion, technology, politics and the environment. Queen Rania’s eco-friendly work preserving parks in Jordan will be included. She tipped off her Twitter followers about her cover turn on Wednesday when she posted a picture of one of the locations with a post: “Just wrapped photo shoot. Love Jerash’s Roman ruins @ sunset. C pix in Sept’s CondeNast Traveller.” In case you were wondering, she has 85,861 followers as of Friday. — Stephanie D. Smith