Memo Pad: To Elle With All That … Only In New York 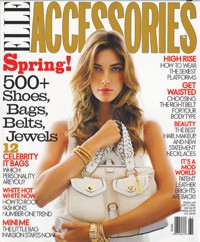 TO ELLE WITH ALL THAT: Kelly Killoren Bensimon has completed her slow-motion exit from Elle Accessories. Bensimon, who is married to but separated from Gilles Bensimon, was editor of the spin-off’s first two issues — although whether her duties ever involved much more than talking the magazine up to advertisers is a matter for debate. Going forward, Anne Slowey, previously credited as issue director, will be the editor, in addition to fashion news director of Elle. Bensimon, meanwhile, has been downgraded to editor at large. “She wanted to stay involved, but she doesn’t have time to edit it,” said a spokeswoman for Bensimon, noting the former model has a new book to promote, “The Bikini Book,” jointly published by Assouline and Elle.

The move was foreshadowed in January, when Elle parent Hachette Filipacchi Media, in announcing plans to publish two issues of the spin-off in 2006, said they would be “helmed” by Slowey, while Bensimon would “continue to contribute.” While the release clearly seemed to imply Bensimon was handing over the reins, as soon as it went out, Hachette began to backpedal: Elle editor in chief Roberta Myers called it “a bad result of a lot of phone tag” and insisted Bensimon was still editor.

A knack for hanging around longer than expected seems to be something the Bensimons share. Last summer, Hachette president Jack Kliger said Gilles Bensimon’s promotion from publication director to international creative director was part of a succession plan intended to bring fresh talent and ideas into the magazine. “Gilles knows that at some point he’ll retire, and I don’t want to have to close down Elle when that happens,” Kliger told WWD at the time. Since then, Bensimon has continued to shoot most of the magazine’s fashion pages and all its covers. That may finally be changing, however; an Elle source said the August and September issues will showcase the work of several new photographers — along with plenty of Gilles’ work, of course.
— Jeff Bercovici

ONLY IN NEW YORK: It’s no Condé Nast, but it’s a nifty little empire James Truman is gradually assembling in his role as chief executive officer and managing editor of LTB Media, home of several art-world magazines. Truman, former editorial director of Condé Nast Publications (parent of WWD) said Tuesday that LTB will relocate Modern Painters from London to New York, where LTB’s other titles, as well as Truman himself, are based. “Essentially, this is going to be the editorial capital,” he said. “We feel a contemporary art magazine published in New York is more powerful than one published out of London. The opportunities for growth really lie in the U.S.” Along with the move, LTB has promoted Roger Tatley from senior editor to editor in chief of Modern Painter. Karen Wright, who has run the magazine for the past 18 years, will remain in Europe as an editor at large.

This story first appeared in the May 3, 2006 issue of WWD. Subscribe Today.

Next up for Truman is the launch of a new title, Culture & Travel. Set to be introduced in September, it already has an editor — Michael Boodro, formerly of Elle Décor. In the next few weeks, it will begin showing a prototype to advertisers, and Truman said he plans to name an art director in June.
— J.B.