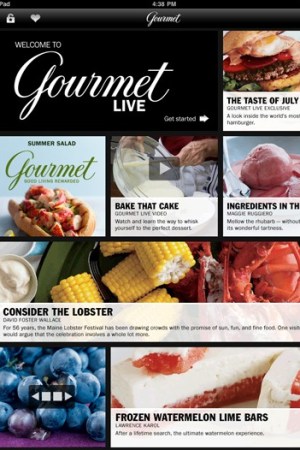 IT’S AL…IVE!: More than eight months after Condé Nast shuttered Gourmet, the company revealed plans Tuesday to revive the revered food magazine. Sort of. “It’s not a magazine, and it’s not a digital version of a magazine,” said president and chief executive officer Chuck Townsend before unveiling Gourmet Live, an app that will bring the title’s 70 years worth of archives to the iPad and other digital platforms. Users who download the program when it launches in the fourth quarter will have access to a preselected slice of stories, recipes and videos that will grow as they explore and share items with their social network. Townsend said the publisher would assemble a team of eight to 10 “producers” (so long, writers and editors; it’s a producer’s world) to aggregate content for the app and that its operations would fall under Carol Smith, vice president and publisher for the company’s food brands. There were more than 60 editorial staffers on the Gourmet masthead when it shuttered in October. Eventually, the company said, the portal could contain user-generated content such as restaurant recommendations.

Townsend said Condé Nast’s optimized projections call for the app to contribute $20 million in annual revenues within three or four years. Though the initial download will be free, Townsend presented Gourmet Live as a sort of sandbox that will allow the company to test new payment sources such as à la carte offerings, virtual currency and membership models as it grows. “We believe that magazines are but the tip of the pyramid in terms of what readers will pay for,” the ceo said (although he didn’t say exactly what else they’d pay for). As for whether user-generated content would be up to the storied Gourmet reputation (the demo version the company showed to journalists offered lush photography and a David Foster Wallace essay from the archives), Townsend allowed there could be some professional content created for the app as well.

Gourmet Live will have company when it launches, as other food titles adapt to the e-reader in the near future. Hearst Corp. plans to release a Food Network Magazine app for tablets later this year, and Food & Wine will launch its own iPad app with the October issue. Dana Cowin, Food & Wine editor in chief, said a price hasn’t been determined, but a subscription model is planned. “It will go deeper and have more content,” said Cowin, noting the app will have more travel and lifestyle content and feature more in-depth interviews with notable chefs such as Mario Batali and Tyler Florence. As for Gourmet Live, a competitor in the making, Cowin said the site will have a sizable archive to draw from, a “great backbone,” but she said it’s not clear what the point-of-view will be. “What distinguishes the brand’s identity?” she wondered. “How is it different from Epicurious?” She added that Food & Wine often works with partner CNN, which launched its own food blog, Eatocracy, last week.

But the final critical word on Gourmet Live on Tuesday went to former Gourmet editor Ruth Reichl, who wrote on Twitter: “Re: Gourmet; they’re reviving the brand, not the magazine. Pity.”
— Matthew Lynch and Amy Wicks

A HORSE RACE: Who will succeed Paige Rense Noland as the next editor in chief of Architectural Digest? All signs continue to point to Margaret Russell, who has emerged as the favorite, according to industry insiders. With her knowledge of the business and long list of contacts, Russell is the obvious choice. Hamish Bowles, Vogue’s European editor at large and former editor of Vogue Living, was among those under consideration, but is said to no longer be in contention. — A.W.

NUDITY LOVES COMPANY: One doesn’t usually equate the word “shocking” with the house of Valentino, but there’s a radical image change afoot there. The fall campaign, which breaks in the July issue of Italian Vogue, has a new photographer — David Sims, who replaced Mert Alas and Marcus Piggott, making this his first Valentino campaign, and mixes nudity in with clothed models. Creative directors Maria Grazia Chiuri and Pier Paolo Piccioli opted for black-and-white and, for the first time, chose to shoot in the house’s historic Parisian headquarters in Place Vendôme. “The idea is that of an unexpectedly intimate black-and-white portrait with candid shots of unconventional, delicate and individual beauty and a more dangerous undercurrent,” said Chiuri. Added Piccioli, “We believe it is a very modern and feminine vision and we wanted to show each woman’s unique personal allure.”

The three models chosen to pose for the moody images are Freja Beha, Monika Jagaciak and Tati Cotlar, while Alex Gilbert provides the male presence. Each photo features two side-by-side shots of the same girl, one where she’s decked out in fall attire and the other naked, but cropped or posing to discreetly conceal her more intimate body parts — so magazines will run the ads.

BEACH BLANKET INK: Sea, sweat, and…backlit screens? It’s not a exactly a hot combination, according to Tyler Brûlé, the founder and editor of Monocle, who’s launching the title’s first print newspaper edition on July 29. Temporarily dubbed Monocle-on-Med, the 60-page paper, which will be sized somewhere between a tabloid and a broadsheet, is planning a print run of 70,000 copies to be distributed in airports and international summer hot spots from Italy and Israel to Aspen and the Hamptons. Brûlé says one of the reasons behind the launch is the abiding versatility of plain old newspaper print. “I was sitting by a pool in Honolulu where there were a mix of American West Coasters and Japanese — people who should all have the latest technology and gadgets — but no one was reading off a screen. They were all engaged with proper media,” he said. “Screens don’t like direct sunlight, sweat, saltwater, or sunscreen, while a great piece of print only gets better at the beach.”

The issue, he said, will be about 30 percent ads — Swiss private bank Pictet and BlackBerry have already signed up — and will plug the gap between Monocle’s July-August issue and its September one. It will have a loose Mediterranean theme, with a combination of essays, comics, news stories, the autumn fashion collections and a survey of fashion buyers. But Brûlé is not turning his suntanned back on digital media: Monocle will also offer its annual group of audio podcasts known as The Monocle Summer Series. — Samantha Conti