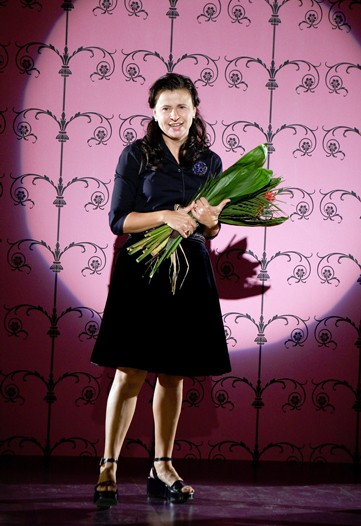 TRACEY AS DONNA AND MIUCCIA: In a career that’s been spent lampooning everyone from airline stewardesses to lesbian tennis players, it was only a matter of time before Tracey Ullman got around to the fashion world. On Sunday night, the comedienne’s Showtime series “State of the Union” added Donna Karan and Miuccia Prada to its roster of characters, which already includes Renée Zellweger, Arianna Huffington, Laurie David and Laura Bush. “I was quite proud of my Donna Karan,” Ullman told WWD on Monday. “Didn’t you like the wig?”

It was a dark brown shoulder length mane and, indeed, it looked unmistakably Donna Karan-ish, as did a necklace of oversize beads Ullman wore as she played the designer making new robes for the justices of the Supreme Court. Moments later, the sometime fashionista (“I was more into fashion when I was younger,” Ullman said) was back as Miuccia Prada, taking her bow at a fashion show where the clothes were ripped from headlines about a cult of polygamist Mormons. This impersonation lasted all of five seconds, but the almost embarrassed, sheepish bow Ullman takes in the sketch was uncannily like the bow done season after season by the woman she was impersonating. “I love how designers do that,” Ulman said. “They pretend to be so humble.” Ullman’s even thinking she might add a few male designers to the mix. “Maybe I should play Oscar de la Renta,” she mused. — Jacob Bernstein

WHAT WOULD YOU DO?: Shelly Branch, a senior special writer at The Wall Street Journal, and Sue Callaway, a contributing editor at Fortune, are suing Penguin’s Gotham Books and writer Pamela Keogh alleging breach of contract, misappropriation of idea and unfair competition, among other charges, demanding damages of $1 million each. At the center of the controversy are two books: “What Would Jackie Do?” which Branch and Callaway published with Gotham in 2005, and “What Would Audrey Do?” which Keogh wrote, also for Gotham.

Branch and Callaway say their innovation was to conceive a “style guide based on the overall comportment and habits of a deceased style icon,” applied to parts of contemporary life, such as shopping online or trying Pilates. This month, Penguin published the Audrey book, marketing it as “in the tradition of ‘What Would Jackie Do?’” with near-identical visual branding.

The two did not know each other, but the complaint says Keogh, author of “Audrey Style” and “Jackie Style,” both published by HarperCollins, communicated with Branch via e-mail, praising their book and later mentioning she had a book due to HarperCollins. Instead, she published what Penguin deemed to be next in a series.

Branch and Callaway allege Penguin breached their contract by failing to properly promote the book (including by failing to inform them that their publicist had left and their book tour had been canceled) and allowing it to be sold in discounted and bulk outlets without their permission. The complaint describes significant tension between Branch and Gotham Publisher William Shinker, who “expressed his irritation with plaintiffs through the use of expletive-laced speech” and argues that in that regard, “Penguin’s actions were motivated by personal antipathy to plaintiffs, as exhibited repeatedly by Shinker, and by a desire to work on a similar project, or projects, with Keogh.”

The complaint does not make allegations of copyright infringement, which could be tricky given that both books were produced by the same publishing house. The plaintiffs referred questions to their attorneys, while Keogh and a spokeswoman for Penguin did not respond to requests for comment. — Irin Carmon

ONE LEAVES, ONE ARRIVES: Last Friday, the media and celebrity blog Jossip went dark — “on hiatus,” it was said. And on Monday, in a separate but related development, Theawl.com was born, with a tagline, “Be less stupid,” that refers not only to the news commentary site’s intention to inform readers, but also to spare its writers from covering traffic-baiting topics they don’t care about. The co-founders are Choire Sicha and Alex Balk, veterans of Gawker, Radar, and The New York Observer, who both seem to favor targeted, witty wrath over indiscriminate bile. “I don’t want to write about what’s horrible all day,” Sicha said. “Not everything has to be dreary.”

And whereas Jossip founder David Hauslaib — who did not respond to a request for comment — has said he got into the blog business during the boom times of 2003 in part because he coveted Gawker’s advertising page rates, The Awl’s business plan so far is at best nebulous. David Cho, who was head of business development on Radar’s Web site and is working on The Awl, said investors and a “blue-chip” sponsor had initially been involved but fell through. Instead, they opted to launch with a bare-bones, personally funded site with what appear to be third-party banner ads, and take it from there. “Making money on the Internet is at a weird place right now,” Cho admitted. “No one knows how to monetize audiences.” The Awl, he said, was staying “lean and flexible,” and hoping that its built-in audience — the writers’ existing fans, who are already signing on as commenters — and educated demographic could sweeten a deal.

Both Sicha and Balk in past years had publicly disagreed with the direction Nick Denton took Gawker. Denton himself reacted to the site on Twitter: “The confusing name and amateurish design of theawl.com could be a deliberate antidote to the pro[fessional] Web. Or just be confusing and amateurish.” He conceded that “the writing is predictably excellent though.”

Sicha said one possible direction for the site was toward online newspapering. “If I had $42,000, I’d hire a reporter,” he said. When it was suggested that in today’s media job market, he could have one for significantly less, Sicha exclaimed, “But I don’t want to pay someone that little!” For now, free will suffice. — I.C.