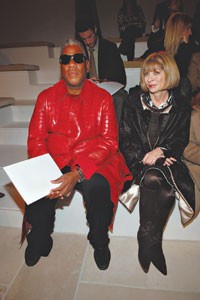 TRY, TRY AGAIN: Jane Pratt just keeps trying for that comeback — and now she’s turned to Gwen Stefani for help. According to sources close to both parties, Pratt is in advanced talks with the “No Doubt” singer to start a women’s lifestyle magazine. The title would be part of a bigger multimedia play by Stefani’s label, Interscope Records, and would include book and online components. Stefani’s lawyer confirmed Thursday that the singer and the former editor are in talks, but insisted there has been “no definitive agreement.” He referred other questions to Interscope, which declined to comment. Pratt did not return calls.

In the eight months since Pratt was forced out of her namesake magazine after endless antics, she has been reported to be working on two projects: a satellite radio program for Sirius and a magazine concept she pitched to Time Inc. Neither has gotten off the ground. Pratt has said in the past she hoped to start a magazine for women over 35. While Stefani is 36, a source with knowledge of the talks believed the magazine under discussion would likely skew younger.

One thing is certain: Pratt had better negotiate fast if she’s to hold the undivided attention of Stefani, who is nearly eight months pregnant with her first baby. According to a source in Stefani’s camp, she will take six weeks after giving birth to get back into shape, then immediately go to work filming a new video.
— Jeff Bercovici

TALLEYING UP: Vogue editor at large André Leon Talley is known for having extravagant tastes and a fondness for expense accounts. So the news that he, and not Vogue, had just paid for his trip to Milan came as a bit of a surprise to fellow editors at the European collections. One person with Vogue ties spoke of a perceived chill between Talley and Vogue editor in chief Anna Wintour recently, and attributed it to Talley going to Milan on his own steam. However, Talley and a Vogue spokesman dismissed questions about a frisson with Wintour. The spokesman did acknowledge the magazine is keeping a close eye on budgets, given the strength of the euro.

This story first appeared in the March 10, 2006 issue of WWD. Subscribe Today.

“There was never any feud. This is not a tempest in a teapot,” said Talley, by phone from Paris. “It’s true I paid for my trip. Budgets are realities. You have to accept that….I felt the winds of fashion were changing, and that it was important to be in Milan at Prada and at the Karl Lagerfeld show for Fendi….I had discussed it with Anna. She was fine with it.”

Talley had little reason to take umbrage himself since he wasn’t the only senior Vogue staffer not sent to Milan this season. Neither creative director Grace Coddington nor fashion director Tonne Goodman attended, though they — and Talley — were at the Paris shows on Vogue’s behalf. According to the spokesman, Talley has only intermittently gone to Milan for Vogue in recent years. (Vogue, like WWD, is owned by Condé Nast Publications.)

One thing Talley has been consistent about is baffling outsiders curious about the parameters of his job description, which seems to encapsulate everything from giving makeovers to Mariah Carey or Melania Trump to providing other media outlets with enigmatic quotes about the fashion industry. In Guy Trebay‘s season wrap-up in The New York Times on Sunday, he was quoted as saying, “Who is this ancient cocktail lady, covered with old lady dust from the deepest tombs of the pyramids of the fashion sphinxes? Where is her modernity? Where is her jeunesse?”

For the April Shape issue of Vogue, the slightly-less-at-large editor took another trip to Duke University’s weight loss center — an excursion that was on Vogue’s dime. “I’ve lost 65 pounds in total,” he said. Talley was keeping the weight off this week by taking long walks from his base at the Ritz in Paris (where else?), where he stayed a few extra days after the collections to see the Modern Art Museum’s Pierre Bonnard exhibit. “It’s so busy during the shows,” he said. “I wanted to absorb the climate and the atmosphere, just to walk around and see people and absorb.”

No doubt he was also looking to recapture a little jeunesse. — Sara James

PINCH HITTER: Andrew Essex didn’t spend long on the unemployment line. Two weeks after the shutdown of Absolute, the luxury city magazine he started as editor in chief, Essex has been snapped up by Rodale to serve as a consulting editor for Men’s Health and Best Life. “Andrew’s an all-star utility player,” said David Zinczenko, Men’s Health’s handy-with-a-sound bite editor in chief. “He understands both design and editorial needs and brings a sophisticated elegance wrapped in a commercially-savvy package.” While Essex’s contract is a short-term deal, “given how quickly these brands are expanding, it’s hard to tell what business opportunities may arise for us or for him in near future,” said Zinczenko.

For now, Essex is going to be concentrating on Best Life, the not-quite-two-year-old Men’s Health spin-off for older readers. Editor in chief Steve Perrine said he will use Essex to help create new sections, revamp the front of the book and add to the title’s stable of writers, which already includes David Mamet, Jay McInerney and David Owen.

For all the abruptness of Absolute’s closure – its Spanish owner pulled the plug without warning, not even bothering to distribute its final issue — the magazine staffers have fared relatively well in the job market. Three editorial assistants have already landed new jobs: Molly Friedman at Allure, Helen Yun at the New York Post and Julia Albu at Giant. Essex, who was executive editor of Details before joining Absolute, received a fair bit of attention; sources said he was under consideration for positions at Men’s Vogue and at Sports Illustrated’s new fitness spin-off. Essex declined to comment on other opportunities, insisting he was just pleased to be joining Rodale. “I know they have big plans to expand, and I’m just looking to help out any way I can.”
— J.B.

RETURN TO SENDER: Every journalist knows the first rule of the trade is don’t become the story. But that rule has a little known corollary: Don’t let a magazine reporter tag along when you go wife-shopping in South America — particularly if you don’t plan on keeping the wife.

Photographer Steven Baillie learned this lesson the hard way, through his participation in a story featured in the April issue of GQ, on newsstands beginning next week. The article, by writer John Bowe, chronicles Baillie’s attempt to find love through a “mail-order bride” service that pairs poor Colombian women with fee-paying American men. Baillie, who has shot for magazines including GQ, Complex and Giant, originally conceived the story as a straightforward photo project, but soon became convinced such a service offered his best hope of finding his ideal mate: a woman who was “model-quality beautiful” but without the “entitlement issues” common among the models and strippers he usually dated. Baillie brought the idea to GQ articles editor Mark Healy, who assigned Bowe to write it. Bowe and Baillie traveled to Colombia, where Baillie selected a woman named Roxana and proposed to her. But, as Bowe recounts, when Roxana came to New York to live with Baillie, the relationship turned bad — spectacularly so — and he ultimately decided to send her, pregnant and unwed, back to Colombia.

As of Thursday afternoon, Baillie had not read the story, but said he was upset over it. “I originally thought I was promised anonymity,” he said. Healy disputed that: “At no point in the process did anyone assure him or say anything that would lead him to believe that he could do this anonymously,” he said. “He invited us along on this adventure, and when it looked like it was going badly he wanted to take his name off it.”

It’s easy to understand why Baillie wouldn’t want to be named in the piece, which presents him as a callow, exploitative playboy. He’s quoted describing his new fiancée as “a cooking, cleaning sex machine.” Later, after sending Roxana back, he says this: “Look at my life before I had this freaking bitch here. What was the problem? I’m freakin’ hangin’ out with all these models and strippers. And, yeah, it’s empty, but like, what’s the problem?”

Bowe, reached on the Pacific island of Saipan, where he is working on a book about modern slavery, said he did not see Baillie as the villain of the story. “He seems like a nice guy, but he doesn’t quite know what he’s doing in this situation, nor does he pretend to.”
— J.B.