As reported by WWD last week, Vanity Fair has produced two different covers on the deaths of Michael Jackson and Farrah Fawcett for its September issue. 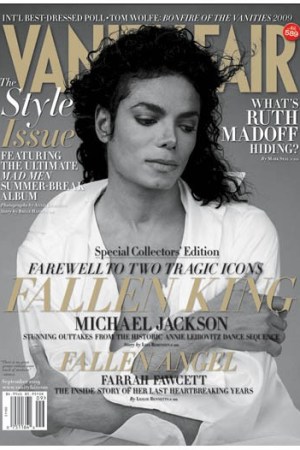 TWO DEATHS, TWO COVERS: As reported by WWD last week, Vanity Fair has produced two different covers on the deaths of Michael Jackson and Farrah Fawcett for its September issue. Both covers will be shipped at random to subscribers and to newsstands beginning Wednesday. “Two covers seemed like the sensible thing to do, given the passing of two major American icons on the same day,” said editor in chief Graydon Carter. The Jackson cover will include a 1989 photo of the singer shot by Annie Leibovitz with an accompanying retrospective from contributing editor Lisa Robinson. Over the years, Robinson had interviewed the singer several times for a variety of publications.

Leslie Bennetts was already at work on a story about Fawcett when the actress died after a long battle with cancer on June 25, hours before Jackson passed away after collapsing at his home. The Fawcett piece will run with a cover photo by Bruce McBroom taken in 1976 on the same day she was photographed in her famous red bathing suit, an image that would adorn walls of boys’ bedrooms around the globe. The exposé is said to include details on Fawcett’s relationship with longtime partner Ryan O’Neal, and interviews with Ryan, Tatum and Griffin O’Neal.

This story first appeared in the August 3, 2009 issue of WWD. Subscribe Today.

The cast of “Mad Men” initially was scheduled to appear on the September cover, but instead actors from the AMC show will appear inside the issue in a photo portfolio shot by Leibovitz.

CYBER MANIFESTO: Yves Saint Laurent is adding its name to the rapidly growing list of fashion brands jumping into social media. On Saturday, the French fashion house launched a Facebook page, “Yves Saint Laurent — the official page,” as well as a Twitter account. Visitors to both will find news about the brand and can follow tweets on creative director Stefano Pilati’s newest collections, projects and YSL events, as well as new campaigns and notables who have been spotted wearing the label.

For the first time, the Internet also will play a role in the launch of YSL’s Manifesto, with publication of the fifth edition slated for Sept. 12. On Sept. 1, the fashion house will launch a special microsite, which will feature an archive of previous editions, as well as a Manifesto blog monitor, and links to YSL’s Facebook and Twitter activities. On Sept. 8, the company will upload a behind-the-scenes video of Manifesto, which was shot by Inez van Lamsweerde and Vinoodh Matadin and features Christy Turlington. The entire publication also will be able to be downloaded from the microsite on the day of the launch.

HARPER’S NEW LOOK: Sophia Neophitou-Apostolou has been named creative director and fashion director at Harper’s Bazaar U.K. Neophitou-Apostolou succeeds Alison Edmond, who is leaving the magazine after 12 years to return to Los Angeles with her husband and children. Natmags, the publisher of Harper’s Bazaar in Britain and a subsidiary of Hearst Corp., said Neophitou-Apostolou will continue to hold the position of editor in chief of 10 Magazine, the edgy style quarterly she founded, and to act as creative director for the fashion houses RM by Roland Mouret and Antonio Berardi, when she takes on the role at Harper’s in September. “Sophia has amazing energy, incredible creativity and will develop fantastic, ground-breaking fashion ideas for Harper’s Bazaar,” said Lucy Yeomans, editor of Harper’s Bazaar U.K. “She is highly respected in the fashion community and will be bringing her trademark passion and vibrancy to the magazine.”

BLOGGING AT VOGUE: Starting this fall, French Vogue will strengthen its ties with blogger Garance Doré, whose contributions will become more frequent on its Web site — and possibly in the magazine itself. Although her official title is still under discussion, Doré’s upcoming Web features will build on her signature rubrics, such as “Une fille, un style” (“A girl, a style”), as well as behind-the-scenes coverage of fashion shoots, profiles of stylish women around the world in collaboration with French Vogue editor in chief Carine Roitfeld and other subjects of her choosing.

“It’s about opening the doors to exclusive and special subjects, to which I can bring my point of view,” said Doré. “I feel very lucky because [Roitfeld and I] speak the same language — there’s a real affinity there.”

Xavier Romatet, managing director of Condé Nast France, noted that accentuating Doré’s presence on vogue.fr was an effort to strengthen the site’s point of view, and “pull it more in line with the magazine.” Both Romatet and Doré stated her main focus continues to be her blog — although with 40,000 unique users, she now has a difficult time keeping up with the requests she receives from fans on Facebook and Twitter. “Social networks are very important, but I try not to spend too much time managing them,” she notes. “What I want to do is push fashion further, whether through videos, trend coverage, my own experiences — whatever is new and fresh. I have great freedom of choice.”

Doré has several other projects breaking in September, including an exhibit at the Gap1969 40th anniversary concept store in London and a collaboration with her American counterpart and companion, Scott Schulman, aka The Sartorialist.