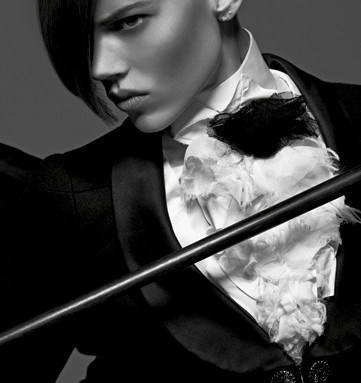 TYRA’S TITLE: Tyra Banks has produced a reality TV show about a fashion magazine, and now she’s launching a fashion title of her own. The former model-turned-media personality is taking her brand into the online publishing world with the Web-only magazine Tyra: Beauty Inside & Out. Banks had been approached several times to publish a tangible magazine, but given the state of the industry and the growing popularity of online media, she decided to go the Internet route. When the site launches, it will feature an audio “manifesto” that asks readers to dream big, ignore the haters, celebrate uniqueness and seek the beauty in everything.

The magazine, which will have six full-time staffers, will explore subjects in beauty, fashion, healthy living and relationships. There also will be behind-the-scenes footage from “America’s Next Top Model,” “The Tyra Show” and photo shoots. The site kicks off today at 5 p.m. with a competition to fast-track one application for cycle 14 of “America’s Next Top Model.” The winner will receive an interview in the final round of the selection process, bypassing previous rounds. — Amy Wicks

THEN WE TAKE BERLIN: German Vogue’s 30th anniversary issue spans a trio of 732-page volumes, each guest edited by a famous fashion personality with German roots: Karl Lagerfeld, Bruce Weber and Peter Lindbergh. “I thought it would be great to find some guest editors who have a relationship with our company,” said editor in chief Christiane Arp. Not to mention Germany itself, especially since Vogue’s anniversary coincides with the 20th anniversary of the fall of the Berlin Wall and the 60th anniversary of the Federal Republic of Germany. Arp said that Weber, while his name is typically German, is perhaps the most surprising contributor of the bunch. “Not so many people know Bruce’s grandparents emigrated from Stuttgart in the early 20th century,” she noted.

All three photographers took Berlin as the jumping-off point, with Weber shooting his stories in New York City and Montauk, N.Y., “with Berlin in his mind,” and Lagerfeld conjuring up the post-World War I period, Arp noted. Plenty of famous German personalities feature in the shoots, including Ute Lemper, Claudia Schiffer, Heidi Klum, Diane Kruger and Kirsten Dunst, whose father hails from Hamburg. Lagerfeld cast model Edita Vilkeviciute as Anita Berber, a dancer and actress whom he described as “the Kate Moss of Berlin in the Twenties,” while Schiffer channeled Rosemarie Nitribitt, a German call girl whose violent death caused a scandal in the Fifties. Weber reunited Margaret Lambert, the German high jumper who wasn’t allowed to compete at the 1936 Olympics because of her Jewish religion, with Karoline Herfurth, the actress who will portray her in the feature film “Berlin 36,” out this week in Germany. Lindbergh, meanwhile, contributed pictures of the city and portraits of such luminaries as Wim Wenders, Andreas Gursky and the late Pina Bausch. Arp opted for text covers in the colors of the German flag in lieu of photos.

Each issue carries 414 pages of advertising, versus 223 pages a year ago. Anticipating strong demand for the collectible issues, which will be unveiled Thursday, Arp said German Vogue plans to print 265,000 copies, versus a usual run of 200,000. Subscribers who have been with German Vogue from the very start, roughly 200 of them, will receive all three issues in a black linen box — and perhaps a pained look from their mailman. — Miles Socha

BABY STEPS: Despite the grim media economy, The Observer Media Group is still looking to expand. Having unveiled a weekly spin-off dedicated to commercial real estate, the paper is now lending its name to a glossy biannual magazine aimed at affluent parents, Observer Playground, appearing Sept. 16. Mary-Louise Parker is on the debut cover, and Karolina Kurkova will host the launch party at DKNY’s Madison Avenue store on Thursday.

The editor in chief is Lyss Stern, the founder of Divalysscious Moms and co-author of “If You Give a Mom a Martini.” While the production has been done at The Observer, the editorial staff, diminished by a round of layoffs, has apparently not been involved. (Besides, almost none has children — as one staffer put it, “because we are kids.”) Instead, the contributors to the 62-page launch include designer Liz Lange, socialite Tatiana Boncompagni Hoover and former New York magazine contributing writer Tara Mandy. The magazine will cover fashion, health and entertainment, as well as include profiles on New York “power parents.” Observer executives were unavailable for comment Friday.

Cookie (owned by Condé Nast Publications, parent of WWD) launched with a similar brief, albeit nationally. Its ad pages in the first half of 2009 dipped 20 percent, to 268. The more mass market Parents was down 9.5 percent, to 610 pages. Locally, the new title’s closest competitor might be the monthly Time Out New York Kids, which has a circulation of 55,000, and whose ad pages aren’t broken out separately. — Irin Carmon