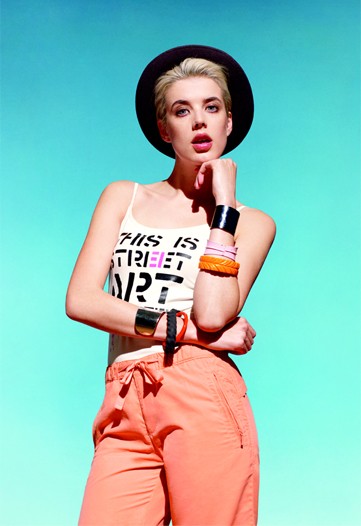 UNIQLO NABS DEYN: First Jil Sander, now Agyness Deyn. The Tokyo-based fashion chain, which earlier this year hired Sander to design a collection, has tapped Deyn to be the face of the brand’s high summer sports campaign, which will break today in Japan and June 1 in the U.S. and the U.K. “Agyness reflects a fresh, youthful and vibrant side of life, which was perfect for the campaign,” said Amy Howarth, head of press and marketing at Uniqlo in the U.K. The ads, shot in New York by photographer Dan Jackson and styled by Nicola Formichetti, show Deyn jumping around in Uniqlo’s signature brightly colored ensembles, such as pink denim shorts paired with a pink hoodie; and a royal blue T-shirt dress and matching baker boy cap. The hip, city-dwelling Deyn is in the campaign alongside Gabriel Aubry, who also happens to be Halle Berry’s boyfriend.

Howarth declined to give details of the campaign’s budget. The ads will run in select magazines and newspapers in the U.K. and U.S., and as a poster campaign in London Underground stations through to June 28.

BAD INTERNET: The panel was about the future of filmmaking, but that didn’t mean anyone had to like what they saw. “I’m a guy who doesn’t see anything good having come from the Internet,” said Sony Pictures Entertainment chief executive officer Michael Lynton. “Period.”

At a breakfast cohosted by the S.I. Newhouse School of Public Communications at Syracuse University and The New Yorker Thursday, Lynton wasn’t just trying for a laugh: He complained the Internet has “created this notion that anyone can have whatever they want at any given time. It’s as if the stores on Madison Avenue were open 24 hours a day. They feel entitled. They say, ‘Give it to me now,’ and if you don’t give it to them for free, they’ll steal it.”

Co-panelist Nora Ephron, who started her career in print, said the Internet has had a greater effect on “our beloved print than it’s had on the movie business.” But, she conceded, “We’re in the last days of copyright, if you want to be grim about it….Stop it. I dare you.”

Lynton tried out another simile. Referring to the Obama administration’s goal to spread broadband access without, he said, regulating piracy, Lynton compared it with building highway systems without speed limits or driver’s licenses. “We do need rules of the road,” he said. (Lynton may not have liked Ephron’s chosen analogy for the way some people in the movie business are paid: “It’s a giant Ponzi scheme set up to compensate a few people at unbelievable rates,” she said, adding, “These people live like pashas. You cannot imagine the scale of wealth in Hollywood. People live like that here, but we live in apartments so you can’t see as much.”)

Though Anne Hathaway, also on the panel and wearing Stella McCartney, lamented the Internet “inhibits your ability to get lost,” either in a role or in watching a film, she shrugged off moderator Ken Auletta’s question about whether the blogosphere had coarsened coverage of actors like her. “It was always true,” she said. “It’s just giving everyone a bathroom wall to write exactly what they think.”

CLASSIC MARTHA: Martha Stewart is about to try something most magazine publishers have yet to attempt: charging for online videos. Next month, Stewart will begin testing consumers’ appetite to pay for videos, which will come from archives that are not yet available online. The videos can be purchased at marthastewart.com and then downloaded onto a computer, iPod or mobile phone. Pricing has not been set. Stewart said she’s been trying to figure out how the company can charge readers for online content for several years although, for now, the broader digital strategy will continue with an ad-supported online model.

“We’ll see how it goes,” Stewart said, during a conversation with New York Times media columnist David Carr on Thursday that was mainly about celebrities using Twitter. They spoke at the DeSilva + Phillips “The Future of Celebrity Media” conference. Stewart now has more than 600,000 followers on Twitter, although she hasn’t figured out how to get them to also read her blogs. “I think we’ll define it more,” she said, adding she will test Twitter with more specific information on, say, weddings or gardening.

THE ROAD TO SOFIA: Condé Nast is breaking into a brand new market, with plans to launch Glamour in Bulgaria later this year or early next. The company said the title would be published monthly, and have an 18- to 35-year-old target audience — similar to its U.K. counterpart. The magazine will be published via a licensing agreement with Liberis Media Group Bulgaria, a subsidiary of Greek company Liberis Publications SA. Bulgarian Glamour will be the 16th edition of the title worldwide and offer a mix of local and international content. The company clearly has high hopes for the market: Carol Cornuau, vice president of Condé Nast New Markets, said the country “has developed fast over the past years and still shows plenty of potential for high-end magazines.” A Condé Nast spokeswoman in London said the group was “getting in early.”