Corner offices across the TV news business emptied out early Tuesday night as their occupants gathered to congratulate Mike Wallace on the publication of his new book, "Between You and Me." 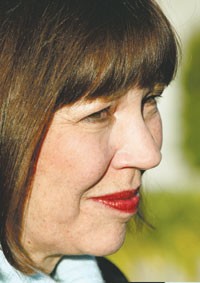 WEIGHING ANCHORS: Corner offices across the TV news business emptied out early Tuesday night as their occupants gathered to congratulate Mike Wallace on the publication of his new book, “Between You and Me.” The party, held at the Plaza Athenée Hotel and hosted by Wallace’s “60 Minutes” co-stars and his friends Nancy Ellison and Bill Rollnick, was filled with the sorts of people who pride themselves on speaking truth to power or, failing that, making celebrities cry on camera. Wallace’s talent for doing both was on display in a video tribute that included snippets of him interviewing Nancy Reagan, Johnny Carson, Louis Farrakhan and others.

All this led some to wonder: What was the most painful interview Brian Williams ever did? Fortunately, the NBC anchor was on hand to answer. “I think the one that went down in flames most publicly was, of all people, Angelina Jolie, on ‘The Today Show.'” he said. “Proof of my long-held theory that I should be nowhere near morning television. It just was bad karma, and it went poorly. And it was clear that we were not meant for each other’s company.”

Williams’ predecessor, Tom Brokaw, offered his own bad-interview story. “I did one with the president of Colombia one time. He just completely froze up on me. He was supposed to be able to speak English and he couldn’t. He just sat there. And it was in Bogotá; it’s a long way to go for a guy to have a complete meltdown on camera on you. I don’t think we used any of it.”

Paula Zahn had this to say, about a tense tête-à-tête with Pete Rose: “At the end of a very grueling and tough interview, he turned to me and said, ‘If you were a guy, I’d kick you in your ass right now.'” The CNN host called it “one of the highest compliments I’ve ever been paid in my career.”

Bob Schieffer, currently holding down the desk at “CBS Evening News” while the network seeks a successor for Dan Rather, said his most contentious interview was Oliver North. “He refused to shake hands with me at the end. It was pretty rough. But I don’t mind the ones that are hostile. The bad interviews are the ones where they just sit there and don’t say anything. And, of course, now, in Washington, everybody has a media coach and everybody has talking points and it’s harder and harder to get people to say things.”

And not just in Washington, either, judging from Katie Couric, who said watching Wallace’s highlight reel “didn’t make me think of any of my interviews; it just made me see how good Mike is. And how relaxed, and how much he connects with people.” Oh, the humility!
— Jeff Bercovici

DEEP THOUGHTS: Among the many gray heads at Mike Wallace‘s book party was that of legendary Washington Post editor Ben Bradlee. What did the man whose reporters trusted him with the identity of Deep Throat think of Judith Miller‘s situation vis-à-vis her New York Times colleagues? “Well, it helps if your source is right,” he said. “It really does help a lot. And she had a whole bunch of sources that were wrong — really wrong. So she’s behind the eight ball to start.” And what should the paper do to set things right? “I don’t want to go there. I would have a plan to get out of that jam. They haven’t got it yet.”
— J.B.

JUDY, MEET MARTHA: Speaking of Judith Miller, she was only one of two famous jailbirds to attend an event in honor of Dr. Andrew Weil on Tuesday night, the other being Martha Stewart. Ever the priestess of propriety, Stewart came and left early — obviously still abiding by the whole “lights out” thing. Miller, however, lingered for a while, giggling at the bar as if she had not a care in the world and had not just met with Arthur Sulzberger Jr., publisher of The New York Times, to discuss her future (or lack thereof) with the paper. The party was cohosted by Sonny Mehta and Kathy and Tom Freston at the Frestons’ Upper East Side mansion, formerly owned by Andy Warhol. Rupert Murdoch escorted his wife, Wendi Deng, and chatted up other journalistic swells, including Mort Zuckerman, Jim Kelly and Graydon Carter.
— Nandini D’Souza

COPY CAPS: Those who’ve seen the early marketing materials for Cookie have been doing double takes at the November issue of Child. The Child cover features a chubby baby in a fur hat, looking suspiciously like the baby on a mocked-up Cookie cover. Since that fake cover of Cookie has been used for promotional purposes for the past six months, leading up to the magazine’s Nov. 15 launch, many in the industry assumed the new Child cover was simply a blatant knockoff.

But Child’s fashion director Gay Morris Empson explained, “I went to Pitti Bimbo last January — it’s a fashion show where all the European children’s wear is shown twice a year — and saw a lot of those fur hats there. I brought some back with me from Italy, and when we did a fashion show at 7th on Sixth in February, we used a lot of them.”

As for the November cover and its striking resemblance to the Cookie image, Empson said, “We shot this a while ago, not long after the fashion show….The hat that’s on our cover is from the Gap, but Bonpoint also had those hats, as did a couple of other European resources. It’s obviously a trend.”

Cookie, of course, won’t be using its chubby, capped baby on its debut — but not because of Child, and not because Condé Nast executives think the “baby’s too fat,” as Gawker.com reported in August. (Condé Nast Publications is the parent of Cookie and WWD.) New titles typically launch with a cover not widely seen in advance by its audience and advertisers.
— Sara James

MAN ABOUT TOWN: Editors in chief of Men’s Journal have not historically enjoyed a lot of job security. Is the same thing now true for prospective editors in chief? After four months as features editor at Men’s Health, Tom Foster has left the Rodale-owned title. A spokesman for the magazine declined to comment on the reason for Foster’s departure, but WWD reported earlier this week that he has interviewed for the vacant top job at Men’s Journal. However, a spokeswoman for Wenner Media, which owns the title, said the job had not been offered to anyone as of Wednesday. Foster did not return messages.
— J.B.