Memo Pad: You Make Me Want To Shout … Role Playing … Fan Base …

YOU MAKE ME WANT TO SHOUT: Is Graydon Carter secretly a frat boy at heart? To supply the music at his wedding to Anna Scott this past Saturday, the Vanity Fair editor in chief hired Otis Day and the... 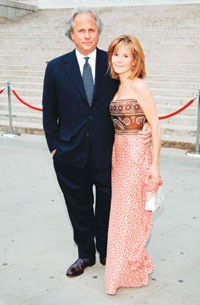 YOU MAKE ME WANT TO SHOUT: Is Graydon Carter secretly a frat boy at heart? To supply the music at his wedding to Anna Scott this past Saturday, the Vanity Fair editor in chief hired Otis Day and the Knights, the fictional-turned-real R&B band from the movie “Animal House.’ Carter and his guests (who included Martin Scorsese, Sumner Redstone, Anna Wintour and Robert DeNiro) boogied down in a dance floor-equipped barn on the editor’s Connecticut estate. The newlyweds retired not long after midnight, but the reception continued for several hours afterward. “It was like a sock hop,’ said one guest.

The ceremony itself was a more traditional affair, held at nearby Christ Church. Carter had two best men: his son Ash, and screenwriter Mitch Glazer. Scott’s maid of honor was an old friend from her native Scotland. The evening’s biggest laugh came when Carter, reading aloud a letter from the absent Robert Evans, tried out his impression of the legendary producer (the subject of the 2002 documentary “The Kid Stays in the Picture,’ which Carter co-produced).

Carter’s bride isn’t the only new woman in his life. He recently hired a new assistant, Leigh Herzig, to replace Meg Nolan, who left the magazine. Carter has a habit of keeping his assistants around long after they’ve finished fetching his coffee; previous occupants of the job include Vanity Fair staffers Aimee Bell, Dana Brown and Punch Hutton.
— Jeff Bercovici

ROLE PLAYING: Neal Boulton is determined to be the next celebrity editor — even if it means resorting to daytime television. The Men’s Fitness editor in chief recently met with a publicist from “The Young and the Restless’ to discuss appearing on the CBS soap opera. If it works out, Boulton, who attended a performing arts school for a time as a child, will play himself, or at least the editor of a Men’s Fitness-like magazine. A spokesman for parent company American Media cautioned the cameo was “not a done deal,’ but a source close to Boulton confirmed he had been talking it up. “What Neal wants more than anything is to be an actor and be on TV,’ he added.

For now, however, he’s stuck with his day job, which seems to be going rather well. In an effort to improve Men’s Fitness’ newsstand sales, Boulton recently decided to split the title’s print run between two covers: one destined for urban markets and one for the rest of the country. The first split-run issue was April, which featured 50 Cent in urban areas and pro wrestler John Cena elsewhere. It was the magazine’s best-selling issue since 2000, according to publisher Jay Goldberg. In fact, the strategy has worked so well, Boulton has privately considered the idea of starting a separate hip-hop title, according to two sources. This despite the fact that he is not exactly a connoisseur of the music: He has been known to pronounce the name of rapper Ja Rule (who appears on the current issue’s urban cover) with a soft “J’, so that it sounds like “Zsa,’ as in Zsa Zsa Gabor. Not exactly keeping it real.
— J.B.

FAN BASE: When renegade Japanese film director Ryuhei Kitamura posed for a photo shoot in the middle of Ginza, you can image the crowd of onlookers the spectacle attracted. Except more eyes were on the photographer, Karl Lagerfeld, than his subject. Kitamura’s portrait is one of dozens by Lagerfeld in a special Tokyo issue of Interview magazine, which hits newsstands in New York and Los Angeles today. “These outdoor shoots were timed by the mobs of people around him. It would quickly reach a boiling point, ‘ related editor in chief Ingrid Sischy, who spent four days in Tokyo last December with Lagerfeld, photographing scores of up-and-coming musicians, architects, artists and actors. The issue boasts double covers — diamond-toothed fashion star Nigo on one, pop princess Utada on the flip side — plus a special advertising section in the middle showcasing the cutting-edge architecture in flagships of Prada, Dior, Louis Vuitton and others. Sischy also corralled a slate of high-profile contributors including Tom Ford, who does a mini profile of architect Tadao Ando, and Yoko Ono, who interviews Takashi Murakami. “We love doing these [city-themed issues] because they’re like performance art,’ Sischy said, alluding to recent Lagerfeld-lensed issues devoted to Paris and Los Angeles. What’s Interview’s next destination? “We’ve been talking about Shanghai,’ Sischy said. “When we really feel it, we just go. For all we know, it could be Dallas.’
— Miles Socha

DEEP THOUGHTS, DEEPER POCKETS: Malcolm Gladwell is commanding far more than pennies for his thoughts these days. Just four months ago, Gladwell’s going rate for speaking engagements within the U.S. was $40,000. Since then, his pay scale has risen dramatically, just as his second book, “Blink,’ has become a fixture on best-seller lists. One person who recently tried to wrangle Gladwell for a conference was told the fee would be a staggering $75,000. Granted, the event will be abroad, and international engagements typically fetch slightly higher rates. But several bookers said Gladwell’s baseline makes up a significant portion of that $75,000. They added that he’s currently one of the highest-paid speakers on the circuit in the U.S.

Wesley Neff, president of the Leigh Bureau, which represents Gladwell, declined to comment on figures but said, “Almost always when you have a number one nonfiction bestseller it leads to increased demand, which leads to increased fees.’ A conference planner who’s been in the business for almost a decade said, “[Gladwell] is definitely the flavor of the month.’ However, he added, as with many perennials on the lecture circuit, “if you watch him on a video and hear him live, there isn’t much variation. It’s a very standard speech.’ Gladwell could not be reached for comment.