Pint-size fashion blogger Tavi Gevinson, friend of Kate and Laura Mulleavy and Marc Jacobs, is about to get a much broader platform for her fashion musings. 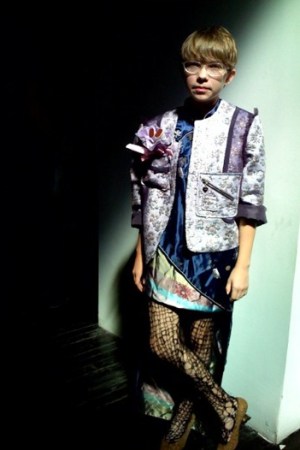 START THEM YOUNG: Pint-size fashion blogger Tavi Gevinson, friend of Kate and Laura Mulleavy and Marc Jacobs, is about to get a much broader platform for her fashion musings. The 13-year-old, who lives in suburban Chicago, has written a column for the January issue of Harper’s Bazaar containing her observations on the spring collections. “Raf Simons at Jil Sander presented dresses and skirts that appeared vulnerable from their frays and shreds, and Francisco Costa showed crumpled pastel dresses that looked as if they’d been stained with tears at Calvin Klein,” Gevinson wrote.

She is the youngest reporter ever to appear on the pages of the magazine, noted executive editor Kristina O’Neill, who met Gevinson at the Marc Jacobs show in September. “I knew that she had written some positive things about our September issue, and I e-mailed her after the show to see if she would be interested,” said O’Neill. The issue his newsstands on Tuesday. — Amy Wicks

DIGITAL NEWSSTAND BOOTS UP: Whispers about several publishers teaming up to launch a digital newsstand have swirled for weeks, but on Tuesday, five publishers went public with news of their intent to launch a digital storefront for magazines, newspapers and other media. Hearst Magazines, Condé Nast Publications Inc., Meredith Corp., Time Inc. and News Corp. have formed a separate entity helmed by John Squires, a former executive vice president at Time Inc. Squires left Time a few months ago to serve as interim managing director of this yet unnamed company.

The goal is to create a standard format for all content that can be applied to e-readers, mobile devices and computers, no matter who the manufacturer, and create a storefront similar to iTunes where consumers can purchase a library of titles. The participants will also work with advertisers to create ads that work on this platform, which can take advantage of video and networking capabilities. Eventually, the platform will sell content from any participating content provider, be it comic books, photo books or even blogs.

The initiative is still in its infancy — Squires would not release details on a pricing structure, a date next year when the storefront would be available to the public or which hardware developers, software makers or executives would be brought on board to build the platform. All he would confirm is that the platform will roll out sometime next year, and that publishers will be able to make money both from single-copy and subscription sales and advertising. “The individual publishers will have great commercial terms. This is an enabling company, one that provides rich returns from everyone in it. The publishers will have many ways to make money that we think they’ll be happy with,” he said. Squires said the first focus would be creating content for smartphones, as several magazines, including Sports Illustrated, Wired and GQ, have already done.

Though pressure has been on publishers to create new businesses as declines in advertising and subscription revenue have crunched profits, Squires said the platform would not serve as the New World Order for magazines. “We don’t think we’re going to replace magazines and newspapers, but there will be some consumers who decide the digital experience is good enough that it’s their preferred method of delivery,” said Squires.

One thing that Squires said would be an unlikely product is individual articles, instead saying archives and bundled content around a subject matter, location or hobby would be better offerings on the service. — Stephanie D. Smith

BUILT FORD TOUGH: While he managed to stay behind the lens for his film “A Single Man” (out Friday in limited release), Tom Ford has been front-and-center this week for the promotional blitz, beginning Sunday with a photo shoot, two audience Q&As and the official New York City premiere and after party at Monkey Bar. But hopefully Ford knew what was good for him and left the rocker-studded (Courtney Love! Michael Stipe! Madonna!) affair in time for a good night’s sleep, as the coming week would be a monster. On Monday, the designer-director powered through a press conference, two more Q&As, a photo shoot and 20 television and 12 print interviews. (When did he find time for lunch? He didn’t. There were no breaks, his publicist said.) Tuesday, Ford dropped by “Late Night With Jimmy Fallon,” in addition to completing two Web site interviews and a radio chat.

And today, Ford will be promoting his film on the decidedly calmer seas of morning TV with appearances on “Good Morning America” and “The Martha Stewart Show.” (He last visited Stewart’s program in 2007, bringing looks from his men’s wear collection as well as his great-grandmother’s recipe for pecan pralines.)

Regarding the media onslaught, Ford didn’t comment — presumably he had no time.

STATISTICAL PROOF: Total advertising expenditures during the first nine months of this year declined 14.7 percent versus last year, according to new data from TNS Media Intelligence. During the third quarter, ad spending fell 15.3 percent, the sixth consecutive quarter of year-over-year declines. Internet display ads rose 7 percent for the first nine months, but just about every other category was down, with magazines falling 19.7 percent, newspapers declining 22.8 percent and television dropping 12.1 percent.

Even though spending continues to decline, ZenithOptimedia said Tuesday the ad market has stabilized and will grow by almost 1 percent next year. The agency, which issued its first upgrade to 2010 in 18 months, also predicted ad spending will grow by 5 percent in 2012. — A. W.

BETTER OUTLOOK: The New York Times Co. has released an updated outlook for the fourth quarter, with print advertising revenues expected to fall 25 percent while total online ad revenues will rise 10 percent. Chief executive officer Janet Robinson said the company should save $475 million this year and the total debt level is projected to be around $800 million at yearend, down from $1.1 billion at the end of 2008.

Executives said it should not be much longer before an announcement is made about its digital business. Robinson noted there are 80 million monthly page views on mobile. — A.W.