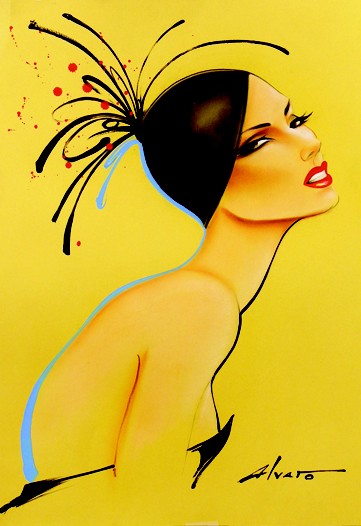 BACK TO THE DRAWING BOARD: The downtown and uptown sets came together on Friday night for a Champagne-and-canapé VIP affair to celebrate the Society of Illustrators’ newest exhibit, “The Line of Fashion,” on view at the nonprofit’s East 63rd Street gallery through May 2. Curated by artist and author Robert W. Richards, the show features commercial and editorial work by fashion illustration luminaries such as Antonio Lopez, Steven Stipelman, Joe Eula, Michael Vollbracht and Kenneth Paul Block. While the art form might have gone the way of 45-rpm records and 35-mm film — WWD and sister publication W Magazine were among its last bastions — you wouldn’t have guessed it given the excited crowd, which included Vollbracht and Stipelman, as well as Narciso Rodriguez, former model Alva Chinn, Bill Cunningham and design duo Phillipe and David Blond. “This particular moment is a good moment for fashion illustration,” curator Richards explained. “Photography is losing its credibility. Nobody knows what’s real anymore, what’s not real — is she really that tall? Does she have that much hair? Are those really her tits? It’s Photoshop, Photoshop, Photoshop. If you’re going to do fake, you might as well go really fake and have drawings.” Plus, Richards noted, there’s an economic incentive, now more than ever. “Illustrators don’t require hair and makeup, a three-room suite and a private plane [to produce an advertisement or editorial story]. We just put our stuff in a little bag and we go and do our work and come home.” — Nick Axelrod

PRINT IT: Variety’s new editor in chief Tim Gray spoke out Monday about modernizing the 104-year-old Hollywood trade journal, but “modern” in his parlance still includes the print medium. “You have to keep changing to stay on track, but personally I think print won’t go away.” Gray said the paper is turning a profit, so there are no immediate plans to shutter the daily or weekly editions in favor of the online version. “Our goal is to give them different identities because they have different audiences,” he said. On the changing Hollywood scene, he said, “I do find it really fascinating that the whole world has become more Hollywood obsessed, so you can’t go wrong covering Hollywood, but it’s a fine line. Our readers don’t want to know about Suri and Shiloh’s play date. I don’t even want to know who they are, but I do.” — Marcy Medina

COAST TO COAST: Katherine Ross, senior vice president of public relations and communications for LVMH Moët Hennessy Louis Vuitton’s North American operations since 2005, is no longer a full-time employee of the French luxury group. Ross said she is now a consultant for LVMH Inc. and based in Los Angeles, where she has been living for more than two years since her husband, Michael Govan, became director and chief executive officer of the Los Angeles County Museum of Art. Prior to joining LVMH, Ross was an executive at Prada Group and, before that, Sotheby’s North America. — Miles Socha

INSIDE JOB: Fashionable Parisians (and those who wish they were) now have a new online cheat sheet. Launched last month by Véronique Roger-Vasselin-Constantinoff, former fashion editor in chief for Atmospheres magazine and onetime style consultant for Le Bon Marché, Doitinparis.com is a whimsical, mostly Left Bank take on style, much in the spirit of Daily Candy.

“Paris is the capital of fashion and art de vivre, and yet I found nothing on the net that captured that,” she said. “This site is about sharing the real Parisienne’s Paris, her lifestyle, fashion outlook, bistros, boutiques and addresses. It reflects the insider’s world.”

Run by four full-time staffers with contributions from about a dozen freelancers, the site will partner with Atelier des Chefs for the “recipe of the week” section starting in May; also in the works are features by actresses, fashion insiders and other high-visibility Parisians. Within its first week, the Web site drew 2,000 subscriptions to its newsletter and 800 unique users daily. Roger-Vasselin-Constantinoff hopes to boost that to 10,000 unique users daily and turnover of $1.5 million, mainly generated by advertising and commissions from online partnerships, by spring 2010. Funded by its founder and private investors including Olivier Dassault, Do It in Paris counts Dior Beauté among its first advertisers (for Miss Dior Chérie). — Tina Isaac