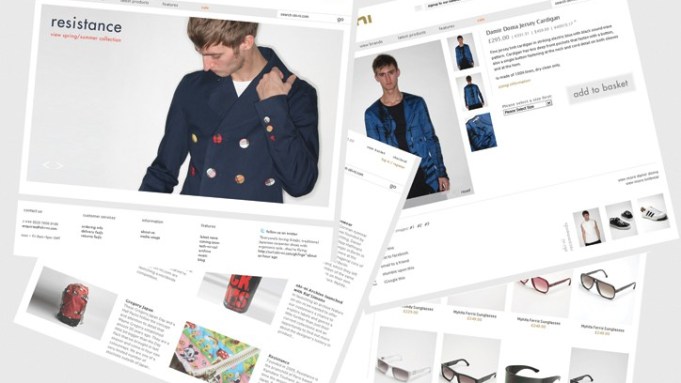 As men surf on their own turf for high-end apparel, sportswear and streetwear, a new breed of online retailer in Europe is seeking to fuel and meet demand by providing a service: part shop, part editorial. Among them are the U.K.’s Hanon.com, Oipolloi.com and Oki-ni.com; France’s Studiohomme.com and Royalcheese.com; Italy’s Thecorner.com, and  Sweden’s Zoovillage.com, all of which combine news, interviews, events and exhibitions with retail to enrich the shopping experience. “Our job is to inform the public,” says John Skelton, creative director for Oki-Ni. “Until now, retailers have second-guessed what the consumer wants and often given a skewed approach or story of what you are trying to sell. Our objective is to put across our take of what is going on, what we think is relative and hot and what we like in a humble way.” Founded in 2001, Oki-Ni first began as a catalyst for collaboration projects and special edition lines, but relaunched in 2007 to sell coolerthan-thou styles and cult brands from across the globe, including Atelier la Durance, Bernhard Willhelm, Humor, Jil Sander, Nom de Guerre, Raf Simons and Rick Owens. “Collaborations and limited editions are mainstream now. We wanted to work with products that speak for themselves, products that are so hard to find that most stores couldn’t even buy them,” Skelton explains. In addition to fashion, Oki-Ni also showcases music and gadgets and boasts a thematic section, which features 12 little-known Japanese designers.

Next fall, Oki-Ni plans to launch a category devoted to the new faces of men’s wear. The site will post an interview with a young designer tracing his or her experience in getting into the marketplace. Consumers who are seduced by the story also can purchase the collection online. Skelton says Oki-Ni sales skyrocketed 400 percent last year, although he declined to disclose figures. The company’s staff grew to 20 from seven. Merging editorial with retail also has helped lure male shoppers to Thecorner.com, operated by Yoox Group, parent company of online fashion retailer Yoox.com. The men’sonly site went live in the U.S. and Europe last year, selling current season collections from brands including Givenchy, Viktor & Rolf, Maison Martin Margiela, Comme des Garçons and Isaia. “Our strategy is providing content and product together,” says Yoox Group founder and chief executive officer Federico Marchetti, fresh from overseeing a video fashion shoot with British photographer Nick Knight. “There is an increasing need for content such as high-quality videos, interviews and images, which informs the consumer and allows brands a compelling way to showcase their product. It can be a very powerful tool.” Thecorner.com also acts as a media partner for various fashion brands, including Undercover, for which it provided video and multimedia content this month during Pitti Uomo, Europe’s foremost men’s wear trade show. Women’s wear will be added to the site in September, following a facelift over the summer, to mark its one-year anniversary. “Men are the ultimate luxury consumers online, and their numbers are rapidly increasing,” says Sébastien Roubaud, who cofounded Paris-based Studiohomme with his business partner, Arnaud Vanraet, both 32.

The site went live in February and aims to become the leading luxury e-commerce site for men. Available in English and French, Studiohomme.com has an editorial page for fashion-minded consumers who want to consider various styling options or watch exclusive video interviews with designers such as Pierre Hardy. “The editorial content helps give the product substance,” Vanraet says. “We knew the clientele existed online, but we need to find different ways of attracting them to the site.” None of these sites should have too much trouble doing that. Online business other than travel, tickets or services is set to double in some European countries over the next three years, according to U.K.-based retail and e-commerce consultancy Javelin Group. Men are conspicuous in this respect. According to the Fédération des Entreprises de Vente à Distance, or the Federation for E-commerce Businesses, online sales in France increased 29 percent last year to 20 billion euros, or $29.43 billion at average exchange. Unlike female shoppers, who hunt online for bargains, male shoppers—especially between the ages of 15 and 25—placed rapidity and practicality before price, the report stated.

What’s more, men between 18 and 34 say they cannot live without the Internet, according to a study from Break Media, conducted by Hall and Partners. “Men are very comfortable with Web shopping—often they do much of their shopping online anyway for consumer electronics, music and media products, computer hardware, etcetera,” Forrester Research Inc. analyst Sucharita Mulpuru says. “So it is a natural extension that they shop for [fashion] online, as well.” She calls men “a natural fit” for e-commerce apparel because of their brand loyalty and because they frequently shop for “replenishment products,” which makes sizing less of an issue and said they had “extremely low return rates.” And the online channel also helps to drive store traffic and sales. According to Javelin, last year the Web directly accounted for 5 to 6 percent of apparel sales in Europe, but indirectly generated an additional 25 percent of total sales by shoppers who research online and buy in-store.