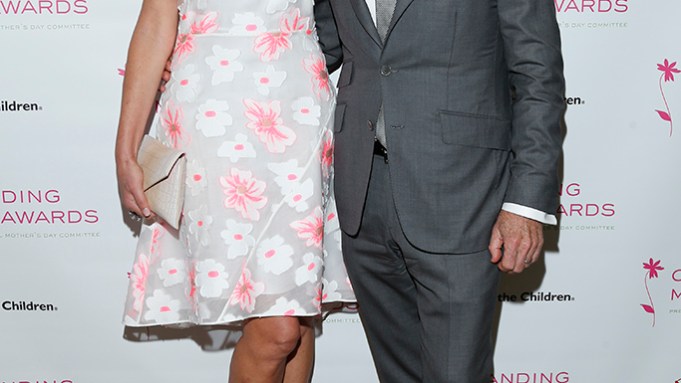 MOTHERS OF THE YEAR: The National Mother’s Day Committee presented four well-known women in the media and retail industries with Outstanding Mother Awards on Thursday.

Although successful women who balance career and family are center stage, the event serves as a fundraiser for Save The Children, a charity that benefits families in need.

Following a brief auction and introductory remarks by chief executive officer and director of HSN INC. Mindy Grossman, who was the mistress of ceremonies, Coles took to the stage to accept her award.

“I had heard that this lunch was a good one,” Coles said with a smirk. “It’s so good, I’m actually thinking of having more children. My husband is looking panic-stricken and so is my 13-year-old son, Hugo, who I’m very pleased could join us.”

Laughter ensued as Coles recounted telling her two sons and husband that she’d been honored with the outstanding mother award, which was met with “guffaws.”

“Hugo asked what was the criteria and why had nobody asked him,” she said, before taking a more serious tone about the importance of the charity for children and parents in need.

The editor left the audience on a high note: “I have been called a mother before, but it’s usually followed by a different phrase.”

Ocleppo, who was accompanied by her husband Tommy Hilfiger and some of their children, followed Coles. She spoke about motherhood as the “ultimate sacrifice,” yet “rewarding” experience.

“Being a mom is no easy task especially when trying to balance a career, but I’m one of the lucky ones,” she said, nodding to mothers who don’t have the support that she does.

Rodbell carried that theme but personalized it by mentioning her own mother, who she called her “best friend” and “adviser.”

“She was always there for me,” the executive said, explaining that her mother is suffering from Alzheimer’s now. “Our roles have flipped.”

Rodbell’s bittersweet speech was followed by a touching, yet raucous one by Vieira, who accepted her award after Grossman read what seemed like a litany of accomplishments and prestigious media jobs, including stints at “60 Minutes,” “CBS Morning News,” “The View” and “Today.”

“I don’t want to toot my own horn, but I understand why I’m being recognized,” Vieira said to laughter. “Like Joanna, there isn’t a day that goes by when I’m walking the streets in New York and someone stops, points and shouts: ‘hey, you mother.’”

The journalist described her own relationship with her mother, who recently died. Vieira described her mom as a housewife, which was the last thing she wanted to be, until she had her first child.

“In the weeks and the months that followed, I realized that the only person I ever really wanted to be was my mom,” she said, her voice quavering, “because it hit me in what she had done in raising independent people that they were enough so that they could leave the house and could soar. I wanted to give that to my children and that has been my goal.”