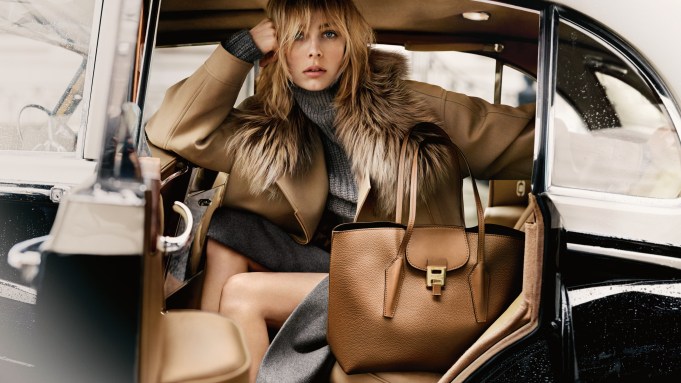 LONDON CALLING KORS, CHOO: London may have taken some hard knocks during this difficult summer, but that hasn’t stopped the city from shining through the fall ad campaigns of Michael Kors and Jimmy Choo.

Kors teamed once again with Mario Testino on a campaign featuring the British model Edie Campbell tooling around town in the back seat of a car, similar to Joan Smalls, who featured in last season’s ads.

In the London story, the car has more of a vintage feel than Smalls’, while the clothes on display — gold sequined dresses and fur-trimmed coats — channel the rich, luxurious feel of the collection.

“This season, I was intrigued by the idea of strength and sensuality,” said the designer, who also shows off the new Bancroft bag in the campaign. Inspired by vintage luggage, the bag has been reworked into a lighter structure that’s meant to be worn from day into night.

“There are women who have been wearing our clothes for more than 20 years, and hopefully, these new styles will become something that you grab onto and wear all the time,” said the designer, who was in London last week to mark the opening of “Tatler’s English Roses,” an exhibition at the Saatchi Gallery that puts the spotlight on the country’s youngest generation of “It” girls.

For the Michael Michael Kors campaign, the designer continued to work with models Taylor Hill and Romee Strijd, who swapped the sunny backdrops of last season’s campaign for London landmarks. The Dutch model Wouter Peelen appears in the brand’s men’s campaign.

The ads will break in the fall issues of titles such as Vogue, Harper’s Bazaar, Le Figaro and In Style, reaching 34 countries across Europe, Asia and the U.S. They will also be featured on the brand’s digital channels.

Jimmy Choo’s campaign features the streets of London and the city’s traditional Victorian houses as its backdrop.

Shot by Theo Wenner, who has previously worked with the likes of Chloé, Marc Jacobs and Carven, the campaign shows models Kati Nescher and Xavier Buestel walking around the British capital. They are wearing minimal tailored outfits that put the focus on the label’s fall 2018 footwear collection, which features jewel-toned boots and pumps for women and sporty sneakers and lace-up boots for men.

Sandra Choi, the brand’s creative director, said she wanted to identify the elements the brand is best known for with the new campaign.

“This season is a particularly pure expression of Jimmy Choo. We’ve focused on the codes that define us and uncovered the building blocks of the brand: The confidence, the sexiness, the playfulness and the glamour,” she said.

The campaign will break in the latest issue of the biannual title Love, which drops later this month. It will also feature in the September issues of a range of titles, including the British and American editions of Vogue.