Since its inception, the Watch Hunger Stop campaign has helped WFP deliver more than 18 million meals to children.

Cleo Wade, an activist and author who served as moderator, asked Kors why he got involved in this fight.

“I’m very pragmatic, and I’m very results-oriented,” said the designer. He said he believes that when everything on this planet “seems so insurmountable,” that the hunger epidemic around the world — one out of nine people does not get the nutrition they need — “is something that we actually can roll up our sleeves and get accomplished.”

As a fashion person, Kors said he’s “a little antsy and always wants to do the next thing.”

“It became apparent to me, that this was a solvable problem,” he said. “There is enough food. We have to make noise. We have to let people know they can get involved and can make a difference. It’s so gratifying to know it’s more than just delivering a meal. We are changing the way future generations will live in many of these places, and we are getting girls to go to school in many instances. The parents would not send them if the meal was not there.”

He also said the company has been able to mobilize its many fans, followers and customers around the world. “This is something that everyone who’s part of Michael Kors’ world can get involved in,” he said.

Asked what inspired her to get involved in Watch Hunger Stop, Nyong’o said, “I admire the work Michael has done, and I was attracted to using something I interact with all the time — fashion — to make a difference. I love that what Michael is doing is starting from what he knows best, which is fashion. It sets the example for everyone else.”

Each October, Kors offers special-edition products specially designed to raise funds for WFP, including a T-shirt and tote that’s available for purchase online and in select Michael Kors lifestyle stores. The unisex T-shirt, offered in black and white, retails for $40, and the black canvas tote, with leather handles, sells for $59. For every LOVE T-shirt and tote sold, Kors will donate all profits to children in need through the World Food Programme. During October, customers can make a donation directly to WFP at the register in select Michael Kors stores worldwide. Five dollars feeds a child in school for a month. Kors is also donating 100 additional meals to WFP if customers “wear it and share it” by snapping a selfie while wearing their T-shirt or tote and posting it online with the hashtag #watchhungerstop.”

“We are in a very difficult moment of human history,” said Antonella D’Aprile, country director, Nicaragua for the World Food Programme. “We’re going through a climactic crisis and we have to do something, and we have to contribute to peace.” She said one of the ways they have to keep children in school is to give them access to a nutritious meal. She said the WFP talks about solutions to eradicate hunger “and to make this planet a better place.” 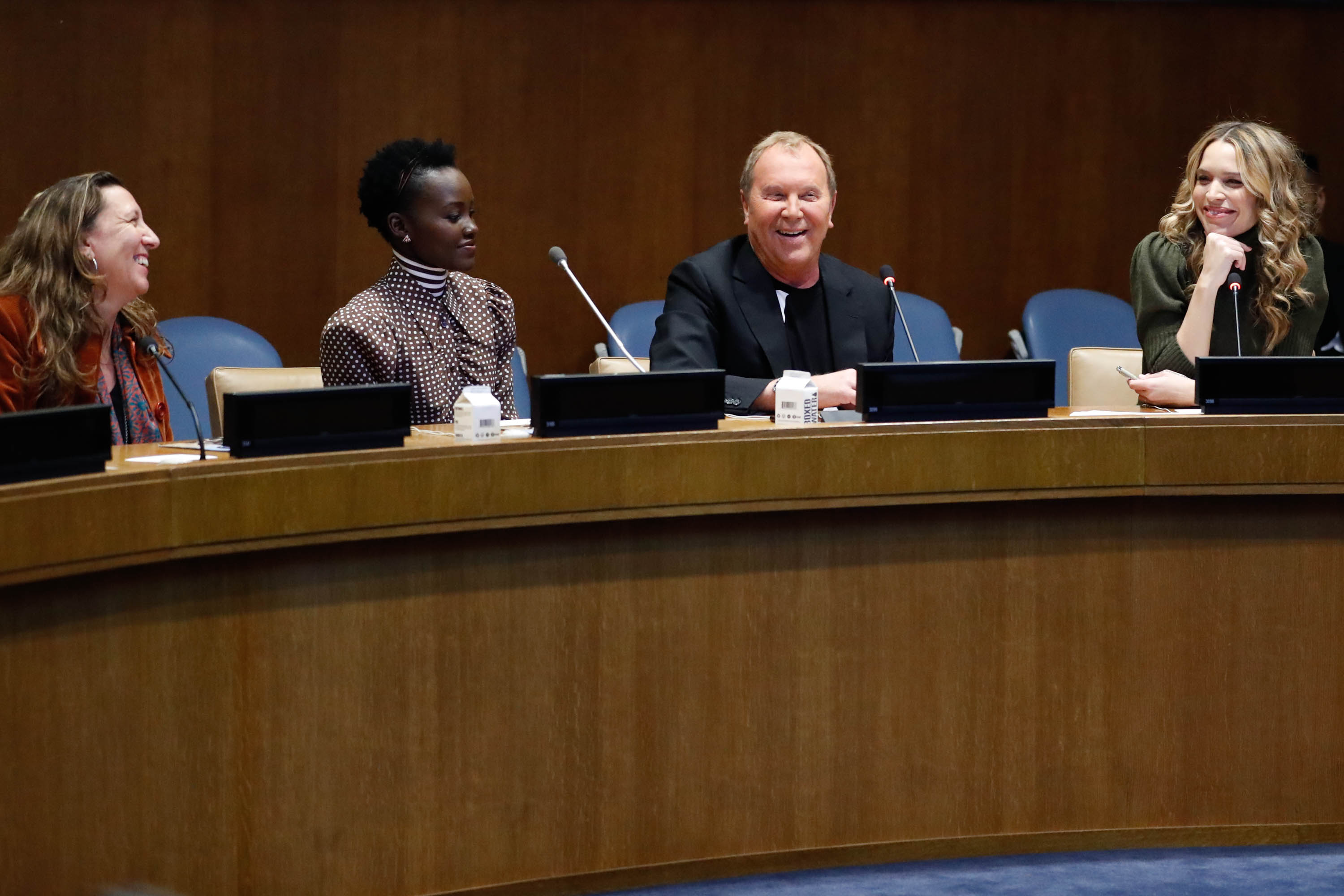 Some 51 percent of those helped by the WFP are girls, an important aspect of the program.

“We do make men’s clothes and accessories, but my business and my tradition of almost 40 years as a designer, started designing for women. Now it’s mind-blowing to me, that I dress three generations of women. I think about the future of what women can do and what women can achieve,” Kors said.

He said in places like Nicaragua, families would not normally send their daughters to school. She would be working and not given an education. “In addition to the nutrition, what I think is mind-blowing, the education is giving all these young girls to be their best selves. They would not have been given this opportunity otherwise. If you harness all those girls and educate them, who knows what they’ll accomplish?” said Kors.

“I think food and hunger are often taken for granted, especially in a land of plenty that we live in in America…it’s not sexy, hunger,” added Nyong’o. She said there are 821 million people who don’t know where their next meal is coming from. “Why I wanted to be involved is because I could give a new voice and face and attract new attention that can get us a little closer to the goals that this incredible organization has set out to achieve.”