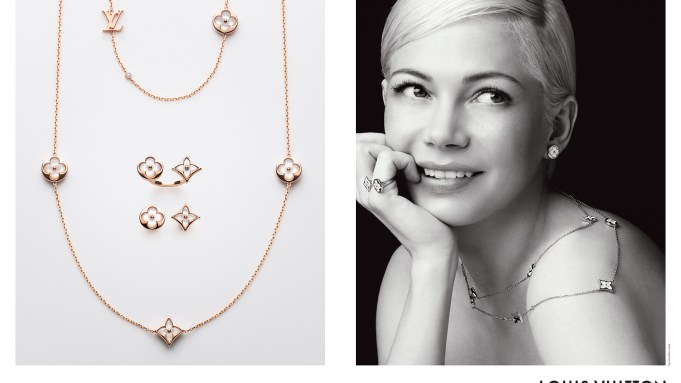 MICHELLE ENCORE: Louis Vuitton and actress Michelle Williams have reunited for a new campaign spotlighting the French leather goods maker’s key city bags — the Capucines, the Alma and a new version of the Lockit.

In one spot, the Golden Globe-winning actress is seen sitting on a tower of several trunks clutching an Alma Epi leather bag in neon yellow, one of the style’s 11 hues. Another shot features Williams toying with the redesigned Lockit, whose calfskin leather gives it a much softer silhouette. The new style — which comes in a range of pastel shades, including deep purple Quetsche and bright pinkish-red Framboise — is due to hit stores in July. The Vuitton spots, which are slated to break on Sunday in the U.S., are building on the previous season’s youthful aesthetic.

Williams, who just finished filming “Suite Française,” based on the award-winning novel by Irène Némirovsky, and is about to make her debut as Sally Bowles in a revival of “Cabaret” on Broadway, was shot by Peter Lindbergh. Hair was by Sam McKnight and makeup by Stéphane Marais. Carine Roitfeld styled the shoot.