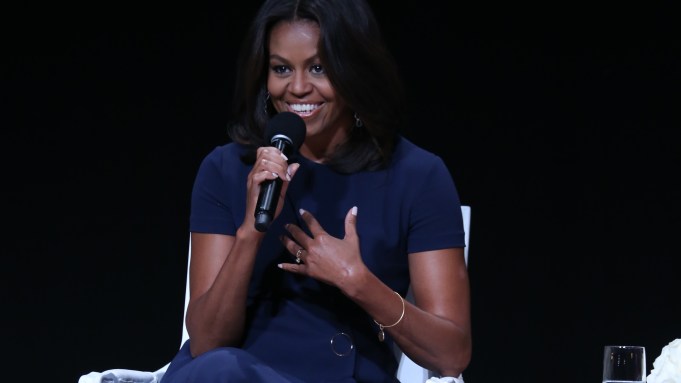 Actress Sophia Bush emceed the event, which was thrown into overdrive when Nico and Vinz sang their hit “Am I Wrong?” before the panelists strode onstage. The crooning session got the audience, which was mainly adolescent girls from schools near and far, on their feet, screaming loudly with their cell phones in the air, recording every moment for social media. Post-performance, before the First Lady came out, a voice instructed the audience to “get their phones ready” — as if that was necessary — so that the event could get trending on social media.

For that, there were four hashtags — perhaps a tad excessive — relating to Glamour’s Girl Project, Michelle Obama’s government-wide Let Girls Learn initiative and others, including the 62 Million Girls hashtag. That hashtag related to the central theme of the event, which is that 62 million adolescent girls across the globe are not in school.

“There are 62 million girls around the world who would give anything to be in your position,” Obama told the audience of more than 1,000 girls. “You have to care about your education.”

The First Lady explained that raising awareness is key to increasing the number of educated girls. That in turn will diminish global poverty, she noted, underscoring the importance of going to college and finding a path to success.

“It’s about defeating poverty,” echoed Gillard, who spoke about changing the perception in certain parts of the world that an education is wasted on a girl.

“Gender equality is a huge problem all over the world,” said Theron, who was there, in part, to speak about her non-profit, the Charlize Theron African Outreach Project. “For me, it’s very personal, coming from a country where people are living with HIV more than any other place in the world,” the South African actress said. “Education is a social vaccine against HIV.”

Questions were preselected from girls in the audience and from school girls via video in far away places, such as Kenya. As the hour-long panel came to an end, Leive fired off a few quandaries to the panel, which included questioning the notion that some young girls may seem “unattractive” to boys if they are too smart in school.

“There is nothing sexier than a smart woman,” Theron said with a hint of outrage at the notion. “We can’t have boys designate [our self-worth] for us anymore.”

An equally impassioned Obama chimed in.

“You will not be successful hanging around people who will drag you down,” she said. “It’s not just the boys, it’s our peer group. Whether it’s your boo or your best friend, you have to push those people aside and you’re going to be doing that your whole life.”