The top 20 most-viewed fall collections in Milan on Style.com. 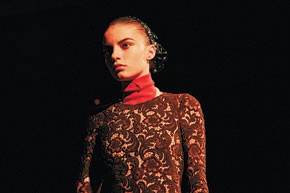 The top 20 most-viewed fall collections in Milan on Style.com.

While some deemed the Milan season “less than stellar,” many buyers praised the emphasis on separates, innovative tailoring, the Seventies touches and the strong showing of outerwear. In addition, they applauded the new lean, long silhouettes seen from designers such as Prada, Jil Sander and 6267, as well as Marni, D&G and Versace for their use of colors. Additional standout collections according to retailers: Gucci, Burberry Prorsum and Bottega Veneta. The top 20 shows during the first 12 days overall received 25.9 million page views for Style.com, a 7 percent increase over the February 2007 shows. Moving into the top 10 were Missoni (up from 13th place one year ago) and Jil Sander (14th to 10th this year).

Remaining in the top spot once again, Miuccia Prada’s direction for fall revealed a collection full of lace in strong, clean-lined shapes. There were sheaths, jackets and great-looking suits. Prada worked in other fabrics that referenced back to her lace fetish, like the usage of sheer perforated organzas and black meltons.

Calling her show “Gucci Boho,” Frida Giannini sent out a collection featuring a combination of elements from the Twenties and the Seventies. She opened with racy, fringed jackets over tight pants. Her dresses included sexy drop-waist numbers in earthy prints, while others went heavy on embroideries.

Donatella Versace closed the Milan season with a show that “fell in with the city’s prevailing mood of approachable polish and chic restraint,” said WWD. She collaborated with Berlin-based artist Tim Roeloffs and showed terrific collage print dresses. The outerwear pieces were stellar as well.

Describing their collection as “street aristocratic,” Domenico Dolce and Stefano Gabbana’s fall show featured a late Sixties and early Seventies mood. The designers concentrated on tailored shirts, ribbed sweaters, suits and dirndl skirts and dresses. Ballgowns of chiffon and tulle were on tap for evening.

The paintings of L.S. Lowry and “poetic romance” were Christopher Bailey’s inspirations for fall. The collection “was fresh, cohesive and lovely, not to mention a major reminder of what put him on the map in the first place,” noted WWD. He sent out signature trenches, tiered shift dresses and baby-doll tunics.

Geometric shapes continued into fall for Karl Lagerfeld. He worked them into black capes, chunky knits and bubble skirts. He also played with a nature theme by showing leaf-shaped appliqués that were sewn onto fitted jackets or dress sleeves. Accessories: over-the-knee boots, messenger bags and frame clutches.

Inspired by George Cukor’s 1939 film “The Women,” Angela Missoni stayed true to her refined, restrained side this season. She showed cashmere and mink stoles, mannish trousers and pencil skirts, many paired with slouchy, shoulder-baring tunics. There were plenty of her signature knits, too.

A London street in winter was the backdrop for Dan and Dean Caten’s fall collection. Models were done up in tight pencil skirts and cropped suit jackets — all of which showed off expert tailoring. The chic short black trench and classic gray overcoat impressed, as did the luxe furs and maxi trenches for evening.

Domenico Dolce and Stefano Gabbana played the modesty card with their nod to the 2006 film “The Queen.” But rather than go mature, they managed to show youthful looks with plenty of plaid in blazers, tunics, bell-bottoms and ruffled dresses. Other fare, like their blouses and kilts, carried a Seventies vibe.

The old-fashioned girl next door arrived on Roberto Cavalli’s doorstep for fall. His looks included sweet floral-print party frocks, along with lace and ruffled dresses for evening. For outerwear, he offered fur-trimmed waistcoats and shearling coats done up in exotic floral embroideries.

Alberta Ferretti took her audience on a quiet, Asian-themed adventure. The influence was seen in her jade velvet frocks, accented with copper highlights in the drapes and folds. Choosing mostly purples, magenta and greens, she also sent out ruched and gathered gowns, along with structured coats and pleated dresses.

Matthew Williamson looked to the company’s skiwear roots this season. He showed belted puffers, shiny parkas and oodles of fur — as in fur coats, fur hoods and fur trims. “Even the accessories went polar, with editorial-friendly clutches, necklaces and belt buckles crafted from clusters of resin icicles,” said WWD.

In his ode to the haute gypsy, Giorgio Armani explored a “fusion of cultures,” according to program notes. He sent out demonstrative jackets over bunched skirts, ballooning pants gathered at the sides, shawls and capes. Evening featured patterns and embellishments in elaborate prints, embroideries and daring fringe.

Anna Molinari showed off a girly-girl side for fall with looks such as silk jersey gowns, skimpy slipdresses and long, fuzzy angora cardigans — all in light pastels and pretty neutrals. Her girl grew up in other ladylike looks, such as classy trenches, the denim and blouse combination series and subtle coat-and-dress styles.

Armani took on a racy mood, featuring animal-print accents, volumized full skirts, languid trousers and jackets ranging from leathers to tweeds. WWD stated, “Evening was all about glitter, with little cocktail dresses and beaded jackets or sweaters over velvet skirts, because Armani gals love to light up the night.”

“No one likes an animal print more than Roberto Cavalli,” said WWD. He opened his show with a flamingo print, strewn across hosiery, a mini shift, a ruffled blouse and other pieces. It all had a Seventies vibe, and the pieces ranged from tailored to free-flowing.

Setting her stage with a giant delivery truck at the runway entrance, Rossella Jardini sent out her collection from the back of the truck. Out came looks with a Sixties London feel, like a trim blue coat, bow-blouse numbers and a mohair shift. Military jackets came complete with brass buttons, tassels and patches.