For the first time in two years, models have replaced the usual celebrities on the cover of the magazine's next issue, which hits newsstands Nov. 8. 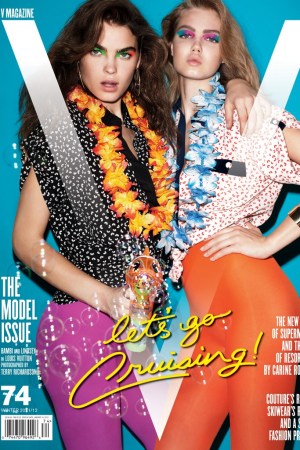 MODEL MOMENT: For the first time in two years, models have replaced the usual celebrities on the cover of the new V magazine, which hits newsstands Nov. 8. The title went with four different covers to showcase the pretty faces, which include Candice Swanepoel and Joan Smalls; Daphne Groeneveld and Saskia de Brauw; Sui He and Hanaa Ben Abdesslem, and Bambi Northwood-Blyth and Lindsey Wixson.

“It’s a big moment of change in fashion. In some cases, you feel like it’s the end of an era. I have been feeling this with cover subjects, and especially models,” explained Carine Roitfeld, who styled the Terry Richardson-lensed covers. “These eight girls are unique, not one is like the other. Candice is the only blonde and blue-eyed of this new generation of supermodels. Joan is black, Sui He is Asian, Hanna is North African. It’s their diversity that makes each of them, to me, truly modern. They bring a new energy to fashion.”

This story first appeared in the October 28, 2011 issue of WWD. Subscribe Today.

On Sunday, V will celebrate the issue with a Halloween party at the gay nightclub Escuelita, hosted by Richardson, Swanepoel, Smalls, Northwood-Blyth and He.