The summer might be winding down, but one of its running plotlines, a spate of crosstown corporate raids among magazine publishers, showed it still had legs. 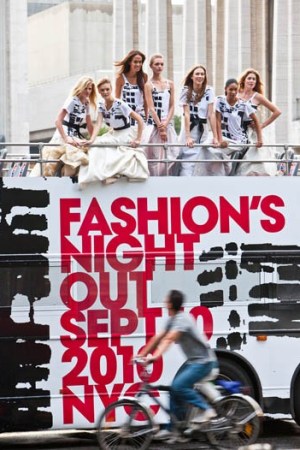 GIRLS ON FILM: For last year’s launch of Fashion’s Night Out, Anna Wintour drummed up a bevy of New York designers for the public service announcement, and had them filmed against a white studio backdrop. This time around, the mandate was to take the PSA to the streets of New York, with top models navigating the five boroughs wearing designer party dresses and the official Fashion’s Night Out T-shirt, which benefits the New York City AIDS fund.

This story first appeared in the August 25, 2010 issue of WWD. Subscribe Today.

The models were filmed across the city over two days at such locations as PS 1 in Long Island City, the Bronx Zoo, Central Park and Lincoln Center, the new home of Mercedes-Benz Fashion Week. David Bowie gave permission to use his 1980 hit “Fashion” for the soundtrack, after Laird asked Bowie’s wife, Iman, when the two were working together on the 2010 CFDA Fashion Awards Journal.

The 30-, 15- and 10-second spots launch on network TV, in taxi cabs and online today, and from Sept. 3 to 10 will be shown nine times an hour on the Toshiba screen in Times Square. — Marc Karimzadeh

ROUND AND ROUND: The summer might be winding down, but one of its running plotlines, a spate of crosstown corporate raids among magazine publishers, showed it still had legs Tuesday when Condé Nast nabbed Time Inc. veteran Monica Ray to head its consumer marketing team. The hire, made by newly minted president Robert Sauerberg, fills the vacancy left by his own promotion last month. Ray had overseen Time Inc.’s paid content strategy as senior vice president of corporate digital development. It may be worth noting she also serves alongside Sauerberg on the board of Next Issue Media, the publishing consortium that counts both Time Inc. and Condé Nast as partners. At 4 Times Square, she’ll no doubt have a hand in the company’s recently professed desire for a more consumer-centric and, by turn, much less ad-dependent future. When she starts on Sept. 20, her official title will be executive vice president, consumer marketing.

Ray is the second executive appointment this month for Sauerberg, who already had lured chief technology officer Joe Simon away from Viacom. In June, Condé Nast itself saw rising star David Carey jump ship to succeed Cathie Black as president of Hearst Magazines. Nor has Time Inc. been a bystander: It poached incoming chief executive officer Jack Griffin from Meredith Corp. earlier this month. — Matthew Lynch

IN THE TRENCHES: London Fog has tapped “Mad Men” actress Christina Hendricks for its fall campaign, which breaks in October fashion and lifestyle titles including Elle, Cosmopolitan and InStyle, in addition to outdoors and online. The black-and-white images feature Hendricks in London Fog outerwear and accessories. The campaign was shot by Nino Muñoz and created by an in-house team at Iconix Brand Group, which owns the label and licenses it in a number of apparel and accessories categories.

“London Fog is a classic brand, which I love. It also ties into ‘Mad Men’ — we used London Fog in the show and this was a nice way to tie everything together,” said Hendricks, who plays Joan Holloway on the AMC series. “The trench is such an iconic shape for men and women. It worked in the 1960s and it works now.”

STAFFING UP: Three months after departing Hermès as senior vice president of communications, Susan Anthony has found work on the other side of the sale at American Express Publishing. Departures publisher Steve DeLuca named Anthony vice president of marketing and branding for the magazine and its corporate cousin, Black Ink, on Tuesday. DeLuca said Anthony will help the magazine and its advertisers engage the “genuine luxury customer.” It’s a field in which her previous employer had plenty of experience.

Meanwhile, over at The Wall Street Journal, Deborah Needleman — who is doing double duty as editor of the paper’s forthcoming lifestyle section and editor in chief of WSJ. magazine — has tapped Kevin Sintumuang, formerly a senior associate editor at GQ, to head up tech and gadgets coverage for the new section, set to make its debut in the fall.