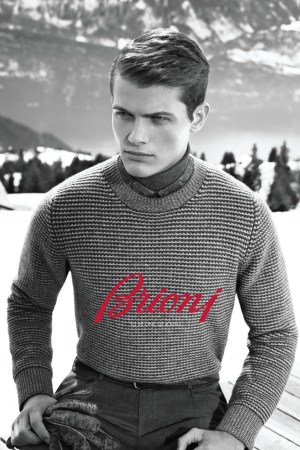 MOUNTAIN HIGH: Brioni creative director Brendan Mullane has tapped New York artist Collier Schorr to photograph and film his first ad campaign for the Italian luxury men’s wear brand. Photographed in Rigi, Switzerland, the black-and-white images “provide pure, intense emotion,” said Mullane, who joined the company last year. “The viewer interprets the Brioni man and is not blinded by a color image. These photos have an almost timeless quality and create desirability. “The designer identified an association with a “trans-Siberian wilderness,” and defined Rigi as a “one-of-a-kind” location, high above the Alps and the Swiss lakes. “It’s amazing, you are in Switzerland, but you could be anywhere, above the clouds; it provides such dense emotion,” he said, adding that the images have a neorealist mood, harking back to the Italian movies of the Fifties.

Schorr said he chose black-and-white images as they transcend “time and genre” like Brioni. “This trip to the mountains seemed a great way to show the silhouettes in contrast to the peaks,” he said.