Move Over Beyoncé: Cardi B Takes Over Louvre With Balenciaga Billboard

The "WAP" singer reclines on fake grass surrounded by kids' toys in the self-produced Balenciaga campaign image, shot during lockdown.

TAKING THE LOUVRE: Beyoncé and Jay-Z took over the Louvre in Paris for the shoot of their “Apes–t” video in 2018. Cardi B is taking it to the next level with the unveiling on Tuesday of a giant billboard on the side of the museum featuring her debut in a Balenciaga advertising campaign.

The “WAP” singer, sporting a sleek black bob, is shown reclining on fake grass surrounded by bright yellow kids’ toys, wearing a slinky, black evening gown with an asymmetric cleavage cut low over one breast. Among the objects scattered on the ground is a pristine white version of Balenciaga’s new Neo Classic handbag.

The image is part of the Kering-owned label’s winter campaign, which it said was self-styled and self-produced during lockdown by its network of friends, which also include American artist Eliza Douglas, a regular on the Balenciaga runway.

Though Cardi B has worn Balenciaga as a customer, this marks her first collaboration with creative director Demna Gvasalia, who selected her look. The designer has strong connections with the entertainment scene, hosting the likes of Kim Kardashian and Kanye West, as well as Hailey Baldwin, at his fashion shows. 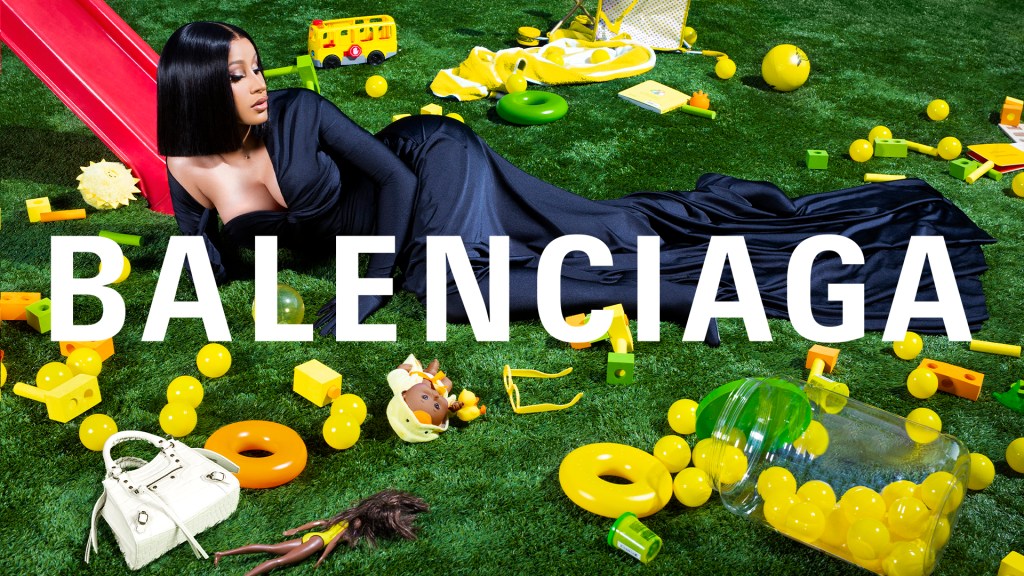 Cardi B in the Balenciaga winter 2020 advertising campaign.  Courtesy of Balenciaga

The brand said the image was shot by Cardi B in Los Angeles during lockdown, though it looks distinctly more polished than most homegrown ad campaigns produced in the recent months, or than the artsy, lo-fi images Balenciaga usually posts on its Instagram account.

Nonetheless, the label emphasized the jarring domestic settings used for the ads, which include closets, bedrooms and backyards.

“By removing some steps in a typical campaign production, a contemporary way of creating fashion imagery is brought to life, bridging the gap between fantasy and experience,” Balenciaga said in a statement.

“From the comfort and confinement of a familiar place, with near-limitless creative control, the stars of the Winter ’20 campaign share an emotional side of dressing alone — for one’s self, or for today’s multiple modes of staying in touch from afar,” it added.

She may look all dressed up with nowhere to go, but Cardi B’s campaign shot will be reaching plenty of eyeballs. The Paris billboard will remain up the entire month of September, and the image will feature on additional outdoor advertising in Paris and Taiwan, China, South Korea, Singapore and Thailand, a spokeswoman said.

Cardi B Teams With Mugler for Another High-Fashion Grammys Moment

Cardi B Shares Her Money Advice and Money Problems at Beautycon