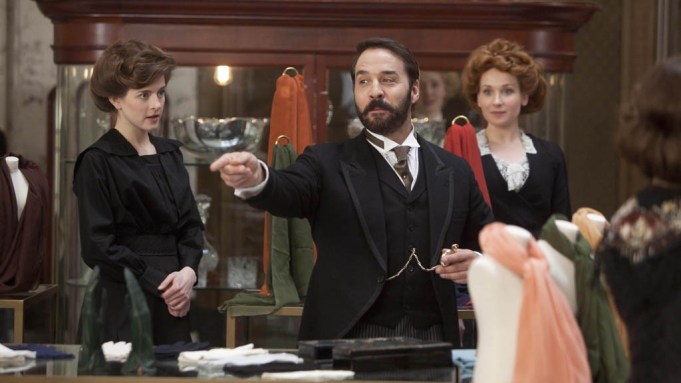 LONDON — Harry Gordon Selfridge, the man who helped put the romance into retail, is ready to sweet-talk the American public in a new British TV drama that’s a world away from “Downton Abbey.”

Later this month, PBS will air “Mr Selfridge,” the biggest show it has ever created and brought to the screen. Produced by ITV Studios for ITV1 and PBS, it’s a lavish costume drama — with cash registers and midseason sales — based on the Chicago native Selfridge and his quest to sex up British shopping.

Forget Downton’s posh types above stairs and the paupers down below. “Mr Selfridge” has showgirls, shopgirls, brash businessmen and lots of snazzy merch. Thanks to Harry Selfridge, Selfridges was the first store in Britain to put the bling into shopping and bill it as entertainment rather than a chore.

The 10-part series, which stars another Chicago native, Jeremy Piven, is based on Lindy Woodhead’s 2007 biography of the rags-to-riches-to-rags retailer, “Shopping, Seduction and Mr. Selfridge.” Woodhead’s book will be published for the first time in the U.S. by Random House to coincide with the launch of the series on March 31.

The show, created and cowritten by the Emmy Award-winning Andrew Davies, made its debut here in January and already attracted an average audience of 8.5 million per episode, compared with 10.1 million for the third — and highest-rated — season of “Downton.” A second season of “Mr Selfridge” has been given the green light, and filming begins in April. A third season is also in the pipeline, according to industry sources.

“Downton” and “Mr Selfridge” follow roughly the same time frame — both begin with the Edwardian Era in full swing and the British Empire at its height. Their budgets, at upwards of 1 million pounds an episode, or $1.51 million at current exchange, are similar too. But the show’s executive producer, Kate Lewis, insists the similarities end there.

“‘Downton Abbey’ hit a certain zeitgeist and spurred a golden age for U.K. drama, but with ‘Mr Selfridge’ we’ve tried to do something different,” said Lewis in an interview following a tour of the set in a cavernous former carpet warehouse in London.

“We’ve based it on an historical figure…and we’re looking at a turning point in history through the prism of retail. We’re also looking at what happened to women: Retail was the one place where a woman could have a high-powered career, and that is fascinating.”

Before the great showman and marketer Selfridge — who had amassed a fortune as a partner at Marshall Field & Co. — arrived in England, there wasn’t so much as a powder room in any store. Shop windows were a jumble of incongruous merchandise, and rarely was there heating or even adequate lighting. At the time, stores also used to employ a sales assistant known as a “floorwalker,” whose job was to eject members of the public who were perceived to be browsing rather than buying.

By contrast, Selfridge wanted his Oxford Street store to offer the public lots of entertainment and opportunities to linger. It had a restaurant, the Palm Court; a ground-floor beauty hall with a dedicated Elizabeth Arden counter; escalators; air-conditioning; live entertainment; celebrity appearances, and even special training programs and leisure activities for the staff.

Much like Selfridge himself, ITV was thinking on a grand scale. It re-created the vast ground floor of the Oxford Street flagship, right down to the marble pillars, which are placed at exactly the same distance as they were in the original store. In addition, Harry’s Art Nouveau-ish townhouse has a full-scale breakfast room, a hallway with colored North African-style tiles and a cantilevered staircase.

“We started from nothing,” said Rob Harris, the production designer, whose team created the pillars and walls from trompe l’oeil marble, stained glass windows and a “movable feast” of glass counters on wheels, laden with leather gloves, jewelry, colored shawls, soaps and fragrances. “We really wanted to capture the revolutionary nature — and the welcoming expanse — of the store as it was then,” said Harris.

The cast reflects the grand sweep of the show. There are 30 major characters and scores of supporting actors and extras, all of whom orbit Piven’s charismatic, game-for-anything Selfridge.

“Beside being an innovator he was an incredibly colorful character. The guy loved nightlife, gambling and women!” said Piven from his trailer, in between filming. Indeed, Selfridge would famously doff his hat to the public waiting outside the store in the morning and don white tie and tails to go to the theater. He was a man-about-town, and the press loved him.

Piven said he knew the stores before he knew about the man. “I’m lucky enough to be from Chicago and to have known Marshall Field’s. It really struck me how much influence his work there had on Selfridges, especially the steel [building frame], the marble columns and having stores be incredibly ornate and larger than life. It was all very over the top — but he meant it.”

Unlike the hard-partying Selfridge, Piven has been keeping a low public profile during filming in London. “You won’t see me falling asleep in the corner of a pub — what you’ll probably see is me walking in circles around Primrose Hill learning my lines.”

He did, however, attend the party to celebrate Tom Ford’s men’s collection at Loulou’s in January. Because it was so dark, guests were having trouble telling the two men apart. “People are looking confused,” Piven, who is a big fan of Ford’s, kidded at the time. “Like, they think there’s two of us.”

Another actor on the set that day was Michael Brandon, who took a short break from his role as the producer R.F. Simpson in “Singin’ in the Rain” in London’s West End to play another big personality, F. W. Woolworth.

Brandon’s Woolworth is less charming and more streetwise than Selfridge, an expert in piling high and selling cheap. Upon arriving in London, he tries to convince Harry that their stores will complement each other rather than compete.

“The five-and-dime has a history for me,” said the actor, referring to Woolworth’s. “My mother used to take me there to have a charlotte russe — a sponge cake with a cherry on top. But I’m not a shopper — trying on pairs of pants is like having a root canal,” said the fast-talking New Yorker.

While so much of the show is about retail bling and the heart-racing buzz of a shopping spree, the costume and hair and makeup teams were measured in their approach to the different characters.

Selfridge’s dark suits, colorful ties and brocade waistcoats were all made to order from original period fabrics. In addition, the wealthy women — including Selfridge’s wife, Rose (played by Frances O’Connor); the sexually voracious aristocrat Lady Mae Loxley (Katherine Kelly), and the celebrity showgirl Ellen Love (Zoe Tapper) — all wear furs, hats like wedding cakes and acres of lace. But not everyone was so lucky.

Costume designer James Keast said, “1909 was our frame of reference for the main characters, but for the working and middle classes, including Agnes [Towler, the poor, aspirational shopgirl], the clothing has to look older — from the 1890s.

“Those classes mended and altered their frocks, so there is a ‘made-ness’ to them,” said Keast, showing off a bit of a sleeve that had been stitched over for effect to cover a hole.

Hair and makeup was inspired by the dreamy portraits of the early-20th-century Italian painter Giovanni Boldini, who specialized in society figures, aristocratic ladies and popular cultural figures of the day.

“The faces he painted were very contrasty — lots of dark eyes and red lips,” said the hair and makeup designer Konnie Daniel, adding that she worked with products including foundations from MAC Cosmetics, Chanel and Giorgio Armani, layering mineral powder on top to give skin a “porcelain look.”

She used a cheek stain; created soft, glossy lips and kept brows light, using powder to define them. In 1909 the feminine ideal was very natural — dark hair, a pale face and rosy cheeks. Color cosmetics had yet to make their breakthrough, something that would not happen until after World War I.

As for the hair, it’s Lady Mae who has the biggest updo, as the wealthy of the era famously wore hairpieces under their hats. “It’s a top-of-the-range look,” said Daniel. Mr. Selfridge could not have put it better himself.