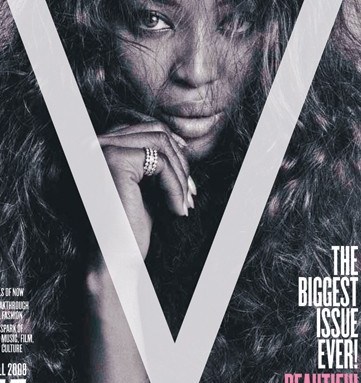 MULTIPLICITY: V magazine has a history of publishing multiple model covers with photographers Inez van Lamsweerde and Vinoodh Matadin, and for the fall issue, 14 covers have been shot, each with a different model, featuring mannequins from Christy Turlington and Naomi Campbell, Agyness Deyn, Daria Werbowy and Lara Stone to newcomers such as Eniko, the new Gucci girl. “Supermodels are our celebrities, so we’ve given the covers to a whole range of models,” said editor in chief and creative director Stephen Gan, who is also creative director of Harper’s Bazaar.

He added that advertising for the issue is up 10 percent versus last September, to 170 ad pages. New advertisers include Diane von Furstenberg and Lane Crawford. The magazine also plans to increase its rate base to 75,000, from 50,000, as of spring 2009. The fall issue hits newsstands on Thursday.

A NIP AND TUCK: The October issue of More doesn’t only mark Michelle Obama’s solo cover debut on a women’s magazine — it’s also the introduction of a redesign by editor in chief Lesley Jane Seymour, who came on in late January. The design is being touted as cleaner, easier to navigate and more upscale, and was conceived by Deb Bishop, known for her work at Martha Stewart Living Omnimedia. “The design before was a lot more chaotic, so we’re simplifying it while keeping the energy on the page,” Bishop said.
“It was all here — I’m just excavating it,” said Seymour.

More can use the boost. Since the departure of Peggy Northrop to edit Reader’s Digest, the magazine has been hit hard in this tough magazine climate. Single-copy sales in the first half of 2008 were down 16.2 percent, and ad pages were down 27 percent through September. Publisher Brenda Saget Darling attributed the ad page drop both to the economy and the fact that More finds itself in an odd, in-between category — less mass than the women’s service books, less fashion and beauty oriented than the core fashion titles. “We’re kind of a woman’s thought leader magazine, except there’s no such category,” she said. She’s hoping the redesign will help attract those much-sought-after luxury advertisers, given More’s relatively affluent readers. The magazine has been hard hit by cuts in both automotive and pharmaceutical budgets, but does a decent business in financial services.

Although Seymour said the fashion editorial has a greater range of price points trending toward more budget options than before, there’s also more awareness of high-end fashion, including styling tricks from the runway and a recurring feature on various over-40 designers’ personal styles.

WITCHING HOUR: After dressing Kate Moss as a runaway bride for its most recent creative campaign, Agent Provocateur has cast a coven of witches to model its wares for fall. Actress Paz de la Huerta, Peaches Geldof and Daisy Lowe are among the models who have posed for the lingerie brand’s yearlong campaign, called “Tableaux Vivants.” The first installment, dubbed “The Season of the Witch,” pictures them posing as glam witches among a medieval cast of characters, wearing leopard-print body stockings and Gothic, lace-edged lingerie, who have captured a few sacrificial virgins. The images, shot by photographer Tim Bret-Day, will appear in a poster catalogue that’s been distributed with issues of Pop magazine and GQ this fall, along with videos and images of the campaign on the brand’s Web site. The catalogues will be in the form of a foldout poster, which will feature a gallery of single shots on their reverse side and will incorporate a riddle with clues hidden in the image. Visitors to the Web site who solve the riddles in all four parts of the campaign will win a prize. The first installment of the campaign launched Sunday. There will be three further parts, reportedly called “Pirate Provocateur,” “Pan and the Vestry of Virgins” and “Picnic Debauch,” which will launch throughout the year. Alice Dellal and Helena Christensen are among the models said to be featured in the later campaigns.