Egerton, known for his roles in “Rocketman,” “Sing” and the “Kingsman” films, is pictured strolling moodily along the rugged coast of his native Wales.

LONDON — Signaling its ongoing ambitions in the sustainability space, Napapijri has drafted Taron Egerton for its fall 2020 Choose Future campaign, which was shot in the countryside and on the beaches of the actor’s native Wales.

The outdoor brand owned by VF Corp. has long been flying the sustainability flag: It started working on the development of sustainable products in 2012 when it became fur-free.

Not long after, it stopped using down feathers and began introducing sustainable, lightweight, recyclable materials such as Econyl nylon, a high-performance yarn recycled from discarded fishing nets and other waste materials. It also began employing digital knitting techniques aimed at reducing the use of raw materials, water and chemical dyes.

Fall 2020 is an important season for the brand as it marks the launch of the Napapijri Circular Series, a family of fully recyclable jackets entirely made of Nylon6, which is recyclable and durable. The collection includes an anorak, puffer and longer “rainforest” jacket.

The fall 2020 shoot is the latest installment in Napapijri’s ongoing Choose Future campaign series, which made its debut in 2019. The series is meant to telegraph positivity, with a focus on “taking action for a better society,” according to the company.

The campaign, photographed by Charlie Gray, shows Egerton in his hometown of Aberystwyth, an ancient market town and holiday resort on the west coast of Wales, looking onto the Irish Sea.

“I feel a strong sense of connection with my hometown,” Egerton said in an e-mailed interview. “It’s a place I associate with creativity, liberalism and, above all, positivity. I wanted my campaign with Napapijri to reflect something positive and something precious. That’s the way I feel about Aberystwyth.”

Egerton is pictured in four separate locations — places that he says are important to him. In a video accompanying the campaign, he talks about the importance of preserving such natural beauty spots for future generations. 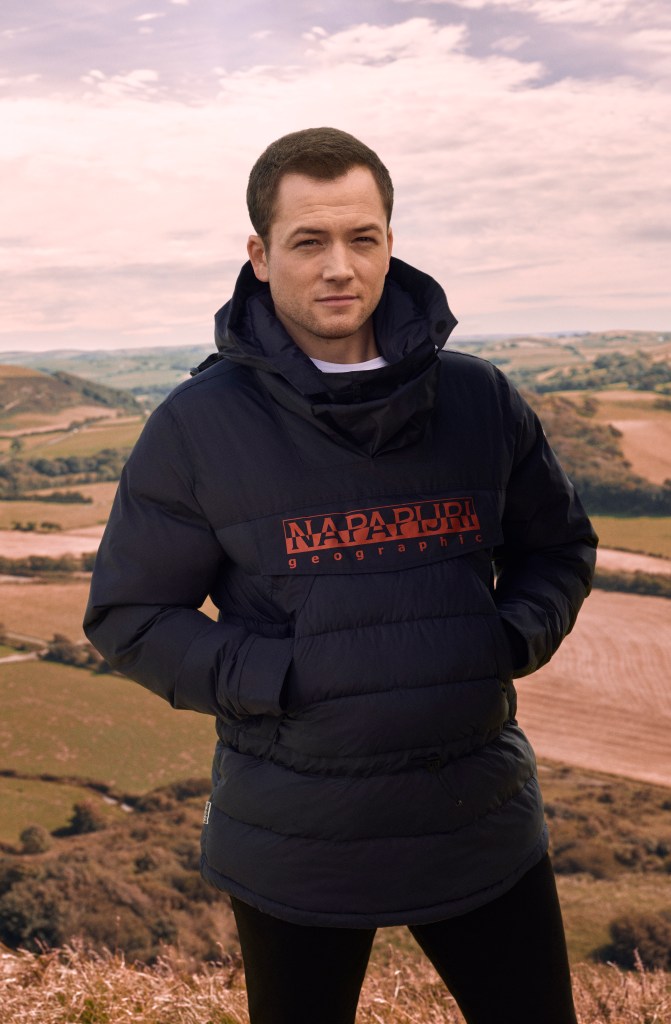 Egerton said he chose to work with Napapijri because it’s “a brand with a conscience, a positive mentality. And they support the communities that they source their fabric from.”

He also pointed to Napapijri’s emphasis on circularity. After two years, certain Napapijri items can be returned and the brand recycles them into something new. In return, the customer receives a significant discount on his or her next piece.

Egerton is best known for playing Elton John in 2019’s “Rocketman,” for which he won a Golden Globe Award earlier this year, and is reprising his role as Johnny, the musical mountain gorilla in the children’s film “Sing.” He is also a regular in the “Kingsman” films.

The company said it chose Egerton because it wants to inspire its audience “with an ambassador who shares our future-positive attitude and who is not afraid to be vocal about the themes that are close to their heart. We feel Taron is this person.

“He will be able to use his platform to reach a wider audience and help us work toward a more sustainable approach to fashion, one that will allow us to preserve our world for future generations.”

Napapijri added that the Choose Future campaign wants to “cast a light on the role that fashion can play and onto our efforts to design the future of circular fashion.”

The brand plans to release different elements of the new campaign onto its social channels later this week, while Egerton will also be promoting it on his own media.

In June, Napapijri’s Circular Series of fully recyclable jackets was recognized with Cradle to Cradle certification, the most advanced standard for safe, circular and responsible materials and products.