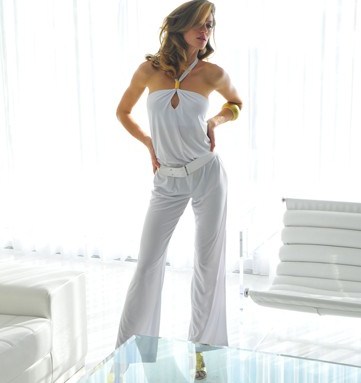 NEW FACE: Rampage, the junior sportswear brand owned by Iconix Brand Group Inc., is stepping it up a notch with a new face — Gisele Bündchen. Signed on for one year starting with spring, the first campaign featuring the Brazilian model will hit April issues of Cosmopolitan, Marie Claire and In Style, as well as other fashion and lifestyle publications. The ads will also appear on a Times Square billboard in New York. Bündchen is replacing model Petra Nemcova, who appeared in the brand’s marketing campaign for the past two and a half years. “Gisele was so involved with these shots. It was interesting to see what she picked out to wear — these pieces were some of our bestsellers,” said Dari Marder, chief marketing officer for Rampage. “She picked the photographer, the hair stylist, makeup artist and she helped us craft the campaign, which is very unique for us.”

Shot in an all white Beverly Hills estate by Mario Sorrenti, the ads feature Bündchen in a range of setups — sitting out by the pool in a bright pink printed halter dress, on the terrace in a bikini top, cut-off denim shorts and wedges, and in the living room in white pants and a white top. “This is the first time we shot the full Rampage collection from denim and swim to sportswear, footwear and accessories, we were able to showcase the full Rampage lifestyle,” Marder said. “We loved working with Petra, but we really feel like Gisele elevates the brand and brings it to a new level.”

Executives at Iconix declined to disclose the ad budget for Rampage. — Julee Kaplan

FROM ‘MAMMA MIA!’ TO MOVADO: Amanda Seyfried, star of “Mamma Mia!” who also appears on the HBO show “Big Love,” has signed on as a brand ambassador to Movado. In addition to Seyfriend, Tom Brady, Kerry Washington and Mikhail Baryshnikov serve as brand ambassadors. “Amanda’s artistic achievements are very impressive and we believe she will add another dimension to Movado’s brand marketing initiatives,” said Mary Leach, chief marketing officer. The media buy has not been finalized, but a spokeswoman said the campaign, shot by Stewart Shining, will run in magazines in March. Seyfriend will be seen in Diablo Cody’s new film, “Jennifer’s Body,” in the fall.