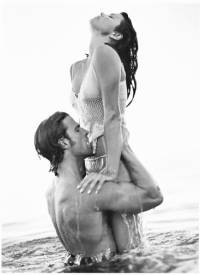 NEW YORK — The fashion ad landscape is as flat as Kansas for spring.

With a few exceptions, major American sportswear companies are keeping a tight rein on their ad spending and focusing on tried-and-true fashion and lifestyle magazines rather than new titles or weeklies. The tight budgets make it likely that magazine publishers will continue to face tough times in the first half of 2003, with deals and discounts continuing in order to get pages.

Companies such as Donna Karan International, Calvin Klein Inc., Ellen Tracy and Kenneth Cole Productions are maintaining their spending at spring 2002 levels, while Guess has dramatically cut its budget. One of the few firms reportedly boosting its spending is Kasper ASL, which plans to raise its ad budget by 20 percent for its Anne Klein and Kasper brands.

“Due to the state of the current economy, our advertising budget is more conservative for spring, with a dramatic decrease in spending in comparison to last year,” said Paul Marciano, creative director of Guess. He declined to be more specific.

The cutback means Guess will drop its traditional multipage impact units for gatefolds, spreads and singles. Its spring campaign will break in February as gatefolds in such magazines as Vanity Fair, Vogue, W, In Style and Interview. In March, ads will appear in Jane, Marie Claire, Lucky, Teen People, V, Maxim, YM, Paper, BlackBook and Flaunt. The spring campaign was shot by Raphael Mazzucco, featuring all newcomers.

Donna Karan will feature Milla Jovovich in both DKNY and Donna Karan Collection advertising. Karan isn’t the only designer using Jovovich this season — she also is the face of the new Emporio Armani campaign.

“I chose Jovovich for both campaigns because I wanted somebody to represent the totality of a lifestyle going from DKNY to Donna Karan. I wanted someone who really represented modern Hollywood glamour,” Donna Karan said.

Both campaigns were shot in Palm Springs, Calif. The Collection, in fact, was shot at Frank Sinatra’s former home.

Lori Wagner, senior vice president, marketing and advertising at Kenneth Cole Productions, said the budget is flat. The company plans to use the same core magazines, such as Vogue, GQ and Harper’s Bazaar. “We’ve added value and merchandising events. We’re much more aggressive. In our stores, we have a very loyal clientele and we’re doing more store events.” Kenneth Cole currently has 79 stores.

For holiday, Kenneth Cole advertised on street furniture within a few blocks of its major accounts and it is looking to do it again for spring. The spring magazine campaign will run in March editions.

Currently, Polo Ralph Lauren is putting the finishing touches on its spring ad plans. Its women’s Collection, Blue Label and Polo Jeans campaigns were shot by Bruce Weber. Its Ralph campaign was photographed by Regan Cameron. Collection ads, which feature Filippa Hamilton and Lonneke Engel, will focus heavily on eveningwear. Those ads break in March.

New for spring is a children’s campaign that will show the whole range of children’s wear from newborns to tweens, rather than break up different age groups.

Jeff Morgan, president of Polo Ralph Lauren Media Group, said the company hasn’t finalized its ad budget yet, “but we plan to maintain our momentum in the marketplace and continue using all the marketing and advertising channels we’ve previously used, including national and regional magazines, network TV on NBC, direct mail for our retail business, Internet marketing, press efforts and fashion shows.”

Peter Connolly, president of worldwide marketing and communications at Hilfiger, said Carter Smith photographed the spring sportswear and Jeans campaigns in Mustique. The location tied in with the company’s Caribbean theme this spring. The sportswear collection is punctuated by whites, khakis, light colors and blues. “It has a very tropical feeling,” said Connolly.

Sportswear ads will break in April in such magazines as Vogue, In Style, Cosmopolitan, Elle, Harper’s Bazaar and W.

For its Jeans campaign, the theme was “Survivor.” Those ads were shot in more wooded areas of Mustique, and feature famous progeny such as Lauren Bush, Lizzy Jagger, Alexandra and Theodora Richards (Keith Richards’ daughters), Ali Hilfiger and Jake Sumner (Sting’s son). Ian Web and Amy Lemmon also appear in the ads. Images are slated for Maxim, Teen People, Rolling Stone, Us Weekly, Stuff, Seventeen and Self.

“Clothes are really important in these pictures. We’re trying to present great pictures that are really strong and feel very Calvin Klein, sexy and romantic,” said Kim Vernon, senior vice president, global advertising and communications. The ads are both in color and black and white, and don’t use the graphics that were used the past two seasons.

Swiwmear ads will break in February, and jeans, underwear, eyewear and Collection ads debut in March. In addition, ads will appear in many European and Asian magazines.

With a flat spring budget, Vernon said the company will continue its lifestyle portfolios of four to six pages in magazines such as W, Vogue, Vanity Fair and Harper’s Bazaar.

Getting key positions in magazines has been Kasper’s strategy for both Kasper and Anne Klein.

“When the market’s been weak, we’ve had the money and we’ve been pretty flexible to take [key] positions when they come up,” said Dee Salomon, senior vice president of marketing and corporate communications at the group.

Anne Klein will once again feature Bridget Hall in its spring campaign, which was shot by Jonathan de Villiers in a studio.

In addition to the Anne Klein collection, the company will advertise licensees such as eyewear, jewelry, belts, handbags and footwear. Ads will make their debut as a spread in February Vogue and will run primarily in March in W, In Style, Town & Country, The New York Times, Elle and Harper’s Bazaar. In April, ads will appear in Vanity Fair. Bus ads will start in March. Anne Klein also plans to advertise internationally.