New Voices in a High-Rent District

It may have PRI (as in portable radio instruments), a broadcast dubbed "American Life" and an npr logo in a familiar red, black and blue color-blocked... 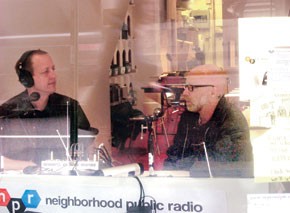 It may have PRI (as in portable radio instruments), a broadcast dubbed “American Life” and an npr logo in a familiar red, black and blue color-blocked scheme — but don’t mistake neighborhood public radio with the National Public Radio network its names and symbols call to mind.

Ask Lee Montgomery, founder of the local medium, if the station is trading off the awareness of National Public Radio and, while acknowledging an element of parody, he’ll be quick to contend its mission is a different one: to give voice to local citizens. Npr is one of the newest examples of the localization trend that is gaining momentum in everything from food to fashion, as well as consumers’ growing demand for personalization of products or media.

“As we’ve explored the characteristics of various neighborhoods and community groups, we’ve tended to find underrepresented groups in each neighborhood that have something to say,” said Montgomery of the station, which went live March 4 in its newest locale, a Madison Avenue studio, two doors south of the Whitney Museum, in New York. The 1,000-square-foot venue, a former Christian Louboutin boutique, is owned by the Whitney, as are the rest of the brownstone buildings on the east side of Madison Avenue between 74th and 75th Streets.

The local radio signal will extend to farther reaches via online program posts expected to begin this week at neighborhoodpublicradio.org.

A few visitors stopped by the Manhattan studio one morning, curious about an npr listing they’d seen on Craigslist New York City. All were invited to go on the air, but only npr’s new intern, Maggie Muldoon — who also discovered the station through Craigslist — took to the mike, to host jazz vocalist JaRon Eames spinning classic jazz from his personal CD collection. “Jazz doesn’t get much attention in this country,” he groused, before going on.

A reporter was pressed into service to make 91.9 FM’s 11 a.m. airtime, because of the late arrival of the day’s first scheduled guest, South Brooklyn pop singer/songwriter Drew Fleming. Talk ran from the absence of commercials on npr (after a passerby held up a Saks Fifth Avenue “Want It” ad in the studio’s street-level window) to the rising price of a slice of pizza to the chaining of Manhattan. The latter was a phenomenon bemoaned by host Montgomery, a man of many hats, who lived for two years in New York’s East Village.

After talking about the former New York governor, Eliot Spitzer, being scolded for arriving late and playing his tunes such as “Hello” on guitar, Fleming obliged Montgomery by closing his half-hour with a playful, recognizable rendition of Lionel Richie’s 1984 hit of the same name.

Fashion voices on npr have included Dee Dee Russell, host of Dee Dee TV in San Francisco, where she has appeared for the past 13 years in her public access cable persona as a self-described “nocturnal bohemian chick.” In more than a half-dozen npr shows in San Francisco, Russell said, she’s advised women “to take clothes shopping more seriously.” Her own favorite ploys include prowling thrift shops like Out of the Closet, where she’s found items under the labels of Betsey Johnson, DKNY and CK Calvin Klein, and procuring cheap-chic cosmetics at haunts like Walgreens.

The Whitney is providing artists’ fees and housing costs for the latest foray by the roving radio station, whose first broadcast was four years ago in Oakland, Calif.’s, 21 Grant Gallery, and since then has taken to the airwaves in San Francisco and San Jose, Calif., Chicago and Europe. Sixteen months ago, the station got a $35,000 grant from Creative Work Fund to finance an eight-month project called Radio Cartography. That is a significant amount for a neighborhood public radio station, which can be set up for as little as $2,000. A small transmitter that can be placed on a building’s rooftop, for example, can be had for $150.

Npr’s six-person staff is led by Montgomery, a media junkie with an undergraduate degree in film from Bard College and a graduate degree in new genres, incorporating studio and liberal arts, from the San Francisco Art Institute. His passion for radio goes back to his Baltimore boyhood and work there at Towson’s WCBT.

Whitney curators Henriette Huldisch and Shamim M. Momin, who curated the museum’s 2008 Biennial, visited npr in San Francisco and subsequently invited the station to be part of the current exhibit. The duo heard about the radio group from artists and curators in San Francisco and Portland, Ore., and were intrigued, Huldisch said, by some of the station’s broadcasts as sound art “in modes that transcend traditional gallery spaces.”

“They are emblematic of a growing number of groups working in exchange with local communities,” continued Huldisch, 36, an assistant curator at the Whitney with expertise in film and video. “Neighborhood public radio uses the medium in a way that makes you think about it differently,” she added of projects such as broadcasting neighborhood walks.

Beyond the cool white walls of its Madison Avenue studio, npr’s Biennial exhibit “American Life” sits in the Whitney’s lower level. There, a working PRI (two black microphones atop a black suitcase housing electronica) can transmit people’s voices throughout the museum, as well as in the immediate area through a beat-up white cube, faced with a metal grill — a Sony Dream Machine digital clock radio that has been converted into a speaker. A legend on the wall behind the setup explains that on Fridays from 1-3 p.m., people who man these mikes can also be heard at 91.9 FM.

Npr’s FM air time in New York, like the 2008 Biennial, is scheduled to run through June 1. PRI streams from broadcasters in San Diego, Oakland and Chicago will also be heard at 91.9 FM and online.

In keeping with the station’s sustainable sensibilities, the npr crew has been buying old analogue toys at 25 cents a pop that might otherwise have become “landfill,” as Montgomery put it, taking them apart and rebuilding them with electronics so that they work differently. Seated on a stool, there’s a large, lifelike simian named James Chimpton, dressed in a suit, tie and shades, that “speaks” in a manner like James Lipton, host of Bravo’s “Inside the Actor’s Studio.” A joystick has been hooked up to a drum synthesizer, stripped down to its circuit board, enabling players to alter tempo and pitch in new ways. A 3-inch-square analogue TV monitor with oxidized metal trim has yet to be remade. These and other toys are displayed in the studio’s orange hutches, spaces once occupied by Louboutin’s shoes.

In the Zone: At-home audience for npr’s Upper East Side Studio