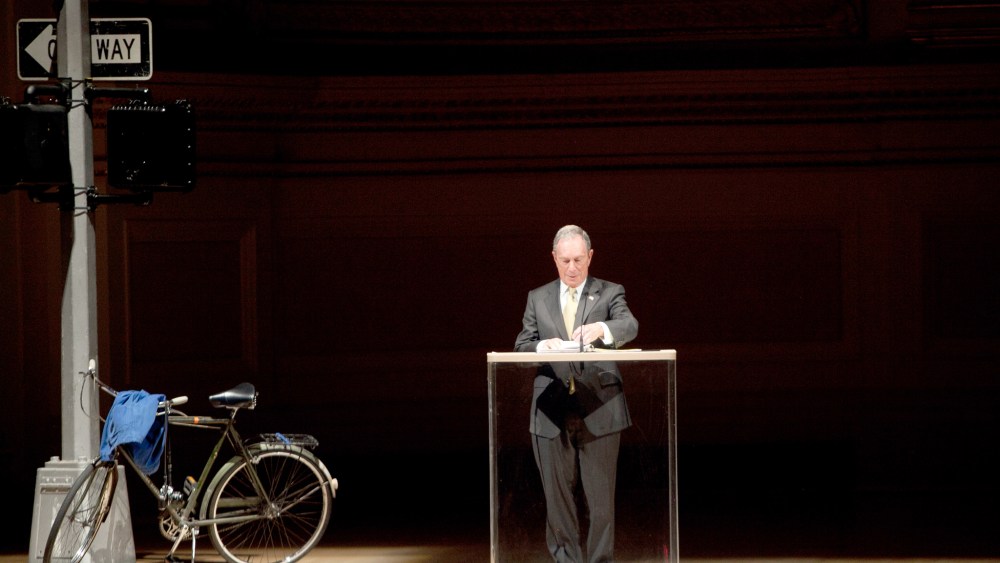 Patrick McMullan milled about the packed parquet-level of the hall as a montage of Cunningham’s photos scrolled silently on stage, which remained empty save for a podium and a bicycle with a blue jacket and a lamppost denoting the street corner of 57th and Fifth Avenue.

Following the 87-year-old lensman’s death in June, the city named that corner after Cunningham for a week, since it was where he often stationed himself to get the street fashion photos for which he was known.

“Bill was endlessly devoted to his craft without an agenda,” the publisher said. “He brought a new life and vibrancy to the pages of The Times.”

Sulzberger said the shy and somewhat monastic Cunningham wouldn’t be soaking up the adulation, but instead turning his camera on audience members and documenting “the fabulousness” of everyone’s style — after all, the Times’ invitation implored attendees to “dress for Bill.”

While extravagant hats, ball gowns, tuxedos and colorful jackets and even bright wigs were on display, the focus remained on Cunningham.

Wintour gave a somber reading of Lord Byron’s poem “So We’ll Go No More a Roving,” which she said reminded her of Cunningham. That was followed by very personal remarks from his former coworkers John Kurdewan and Joanna Nikas.

“Bill was not just a colleague or anything like that. He was my dearest friend,” said Kurdewan, who recalled memories of spending Thanksgiving at Cunningham’s apartment located just two blocks away.

Nikas choked up remembering how Cunningham would give them feathers from the hats he had designed or roses on Valentine’s Day. “He celebrated the people who refused to be corralled,” she said, recalling his passion for documenting iconoclasts, the outsiders.

Bloomberg echoed that sentiment and noted that it extended to New York City itself. He saw the “elegance” and “grit” of the city, the former mayor said. “Bill understood that the best runways were the streets of New York.”

Breaking up the heavy mood, Bloomberg joked that he gave Cunningham the mayor’s award years ago because “he had the one column in The New York Times that I never found any fault with.”

But it wasn’t just fashion that inspired Cunningham. The photographer was a regular on the philanthropy circuit.

Joan Weill told stories about Cunningham’s support at various galas, before her husband Sandy, who serves as chairman of Carnegie Hall, shared a story about renovating the apartments in the building where Cunningham had lived for years. Weill was tasked with relocating Cunningham, whose one request was to have a similar apartment, namely one with a toilet in the hallway. Cunningham wasn’t fond of cleaning the bathroom. Weill found a suitable apartment steps away but it had a bathroom inside the apartment.

“Evidently it’s illegal [to have a bathroom in the hallway],” Weill said, offering Cunningham the pitch that the financier would “come and clean the bathroom every Friday.”

Weill’s wife joked: “That’s more than he’d do for me.”

Real estate mogul William Rudin noted that a chair would be named in Cunningham’s honor at Battery Park by the SeaGlass carousel, while Heidi Rosenau, associate communications director at The Frick Collection, shared how the photographer supported the arts and lesser-known events throughout the city, like the jazz picnic on Governors Island.

Perhaps the most unexpected moment of the memorial was when Cunningham’s niece, Trish Jarvis Simonson, shared some personal memories of her “Uncle Billy.”

While faded black-and-white photos of Cunningham’s parents and siblings flashed via projector, Simonson shared tales of how Cunningham would return home to the Boston area for the holidays with a gingerbread house he picked up in the city. He would talk about the shows in Europe and the parties he attended, but rarely anything too personal.

“He lived his life on his own terms,” she said. “There will never be another Bill Cunningham. His passion is ingrained in this city and in my memory forever.”