The line between media news and news-news can be tough to find. 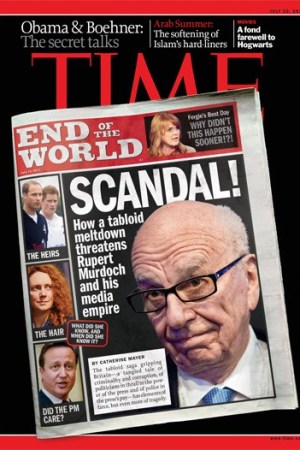 NEWS OF RUPERT’S WORLD: The line between media news and news-news can be tough to find. Earlier this week New York magazine editor in chief Adam Moss chatted with his new writer at large Frank Rich on the magazine’s Web site — they’ve started doing that every Wednesday — about the week’s news, namely the Murdoch phone-hacking saga in the U.K. “I’m having a hard time telling if this is just a giant media story here or something larger,” Moss wrote. Is Murdoch a cover story for the newsweeklies? The consensus is yes.

Bloomberg Businessweek and Time magazine both have Murdoch covers out on newsstands today. Businessweek’s story, “Ink-Stained Wretchedness,” happens to be the magazine’s second News Corp. cover in four issues. At the end of June, the magazine ran a postmortem of the company’s acquisition of MySpace.

Newsweek won’t have anything Murdoch related on its cover come Monday, according to a source at the magazine. Last week’s issue included an essay, “Murdoch’s Watergate?” from Carl Bernstein, while editor in chief Tina Brown took to The Daily Beast on Sunday to write about Murdoch’s character. “Murdoch is endlessly fascinating to watch because his talents and brilliance are equaled only by his amorality,” she wrote.

Murdoch has been on the page A1 of The New York Times for a week straight and the paper’s editors have assigned reporters on three continents to track the latest — the paper seems to revel in covering the story, especially in a week when the paper was able to report that its parent company will issue Carlos Slim $279 million as a prepayment of its two-year-old loan in August — but the Times Magazine won’t be running anything Murdoch-oriented on the cover this Sunday. They were, after all, one of the first titles to beat the phone-hacking drum stateside with a memorable yellow Pop cover last September.

As for Moss’ magazine, this week’s Eat Cheap edition was a double issue, so New York is dark next week.

FEELING LUCKY?: It’s no secret that Lucky editor in chief Brandon Holley has been making a big push on the Web — most recently by partnering with social shopping platform ThisNext. Now, the title is holding an “American Idol” style competition with a grand prize of a contributing role at the magazine. One note to all the writers — don’t get too excited. While there is a grand prize of $10,000, the winning contributor has no guarantee that submitted articles will be published. “It’s a nationwide casting call for new voices that we wouldn’t necessarily hear from,” Holley said. “Ultimately, the lifestyle contributor will be chosen by a community of Lucky enthusiasts.”

For those still interested, the first challenge begins Monday, at luckylifeeditor.com. The task asks contestants to talk about their “work style.” It’s a double-elimination contest, with five rounds of writing tests. A winner will be named Dec. 1.