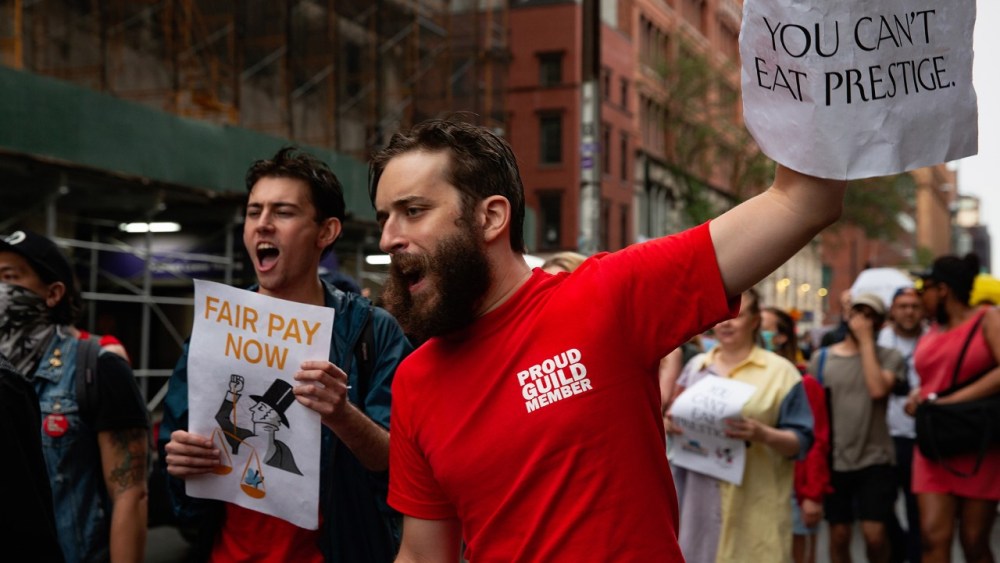 Members of the NewsGuild of New York, which represents Condé Nast’s The New Yorker, Pitchfork and Ars Technica, marched toward the home of chief content officer and Vogue global director Anna Wintour Tuesday night over The New Yorker union’s demands for a fair contract.

The New Yorker Union, which has been negotiating with the publisher for its first contract since 2018, represents around 100 editorial staffers at the magazine, including copy editors, assistant editors, editors and web producers, but not staff writers. It has proposed a salary floor of $65,000, but alleged earlier this year that during recent bargaining negotiations, management proposed a salary floor of $45,000 — only $3,000 more than the lowest current full-time salaries. Sources told WWD that this Condé Nast has since increased its offer to $54,500.

According to CNN, Condé Nast tried to deter union members from protesting by sending a note to staffers Monday.

“While we respect and support our employees’ rights to organize, doing so while targeting an individual’s private home and publicly sharing its location is not acceptable. Condé Nast is committed to the safety and security of all its employees and we take this situation seriously,” it said. “At a time when journalists are being personally attacked, harassed, and targeted for their work, to put a colleague in such a position is just irresponsible.”

The New Yorker Union Twitter account wrote: “As we hope the company is aware, it is illegal to threaten employees with adverse consequences for taking part in protected concerted activity. We hope to see you at 6:30 tonight.”

Despite the stormy weather, Tuesday’s picket was attended by about 75 mostly masked people, many wearing red NewsGuild shirts. Participants chanted refrains such as, “Bosses wear Prada, workers get nada,” “Condé bosses rich and rude, don’t you know prestige ain’t food,” and “Hands up, hands down, New York is a union town.” Amongst the signs were “Fair Pay Now,” “Coöperate With The New Yorker Union,” and, succinctly, “Condé Nasty.”

There was no sign of Wintour, although there appeared to be a security guard stationed outside her town home; a New York Police Department officer was also present. The protesters marched back up Sullivan Street toward Washington Square Park around 7:45 p.m. chanting, “We’ll be back.” 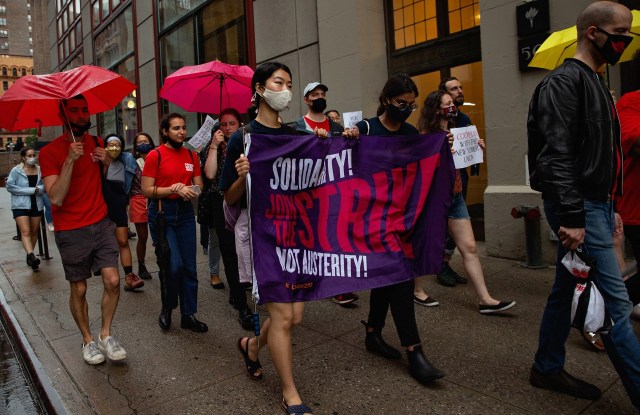 In January, The New Yorker Union staged a virtual walkout after publishing a report that alleged “significant” pay gaps between men and women — and particularly for women of color, who earn on average about $7,000 less than their male counterparts. The report also claimed that wage stagnation and lack of opportunity have affected many employees at the magazine. The median salary for unionized employees was $64,000. 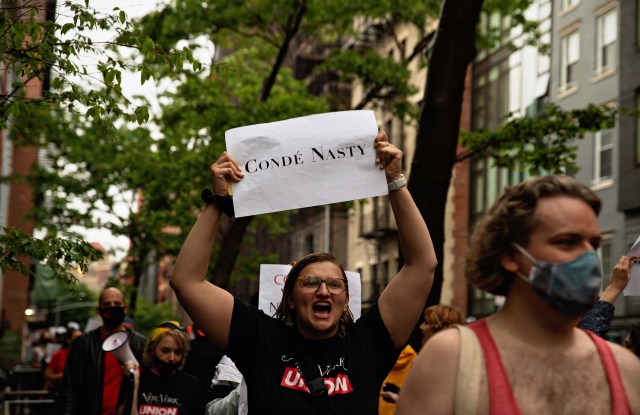 There has been some progress in other areas, though. In October, the two sides finally reached an agreement over a “just cause” clause in the union’s contract following 35 hours of negotiation. Unionized staffers had been negotiating for more than a year for a “just cause” measure to be added into their contracts, which means standards must be met prior to a termination. The union claimed that it’s a basic labor standard found in many contracts that guarantees due process and promotes fairness and accountability. At one point, Rep. Alexandria Ocasio-Cortez and Sen. Elizabeth Warren pulled out of the virtual The New Yorker conference in solidarity with staffers. 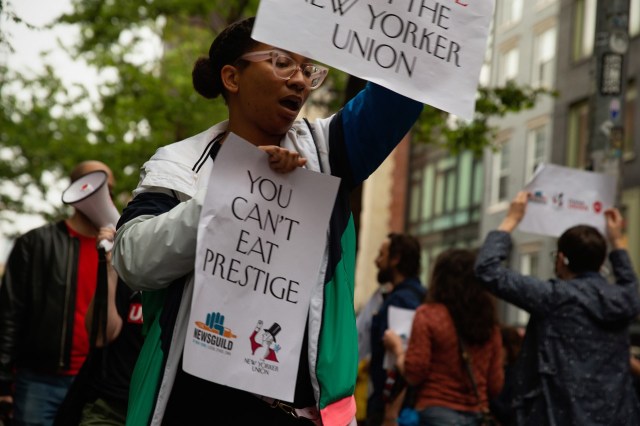 Photos by Lexie Moreland for WWD