Newsweeklies Turning Up Volume on Covers 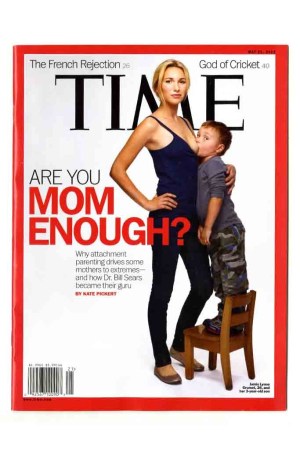 NO BOOB: Time magazine’s breast-feeding cover was shot just four days before it was published online Thursday, when it was vivisected, mocked and then, predictably, turned into a meme. The magazine had its first cover meeting for Kate Pickert’s story on attachment parenting the Thursday before publication and by Sunday, four moms and their broods were sitting before photographer Martin Schoeller. Of the four, Jamie Lynne Grumet “symbolized what we wanted to present,” D.W. Pine, Time’s design director, said Friday at the Society of Publication Designers’ annual awards at Cipriani Wall Street, where Time was up for the top prize. “We wanted to make sure people understood the topic, and [we wanted to] get attention of course.”

That last bit should have been explicit, but it’s also the reason the cover was greeted by some with as much scorn as a new Katie Roiphe piece, or a creeping new meme. “Shameless traffic bait!” the Internet bellowed, writing Time off as a crotchety magazine lamely trying to cause a stir. Quickly, a spoof cover posted on the design blog Coverjunkie made the rounds. Its headline blared in bold red: Are you desperate to sell magazines? The cover was then also mocked on “Saturday Night Live” over the weekend.

Weeklies like Time are increasingly turning to provocative covers to move units; most recently, Bloomberg Businessweek used a suggestive image to illustrate the Continental-United merger, and Newsweek’s covers land like Internet stink-bombs. While the Businessweek earns accolades for its art direction — it won magazine of the year at the awards Friday night — Newsweek is regularly derided as gratuitous for covers featuring a crazy-eyed Michele Bachmann and a blind-folded model for a story on rape fantasies. This week, it’s dubbed Barack Obama the “first gay President” on its cover.

“We never go to into a cover thinking, ‘Oh let’s just shock people.’ We really don’t,” Pine reassured. “We really want to make sure we’re being fair to the subject and illustrating the subject.” But if it sells at the newsstand, hey — the magazine has said it sold more online subscriptions Thursday than it had the entire week prior; a Time spokeswoman declined to give specific figures. And the magazine needed it — Time had about 415 ad pages through its May 14 issue, a drop of 20 percent over last year, according to Media Industry Newsletter. Newsweek, which only has a little over half its competitor’s ad pages, is up 21 percent through the same issue. Businessweek has them both beat, with nearly 600 ad pages so far. Both Time and Newsweek saw small declines in newsstand sales in the second half of 2011, according to the Audit Bureau of Circulations.

“In the end, we’re here to sell magazines, and we hope it sells magazines,” Pine said. Time’s cover the week before — a portrait of Bo Xilai tinted red under bright yellow type — was the sort one has grown accustomed to seeing at the dentist’s office and, at Cipriani, Pine seemed to be enjoying stirring the pot like his counterparts at the other weeklies, even if the boob hubbub likely won’t be repeated soon. “We’ll be flattered if other people want to take this route. Are we going to do this again next week? No. We have a responsibility to cover lots of different topics,” Pine said.

Tina Brown also likes the water-cooler metaphor. “There has always been a need to be bold on the newsstand and as an editor I always have been,” she said in an e-mail, as she was traveling on business. “Newsweek’s covers start the conversation for the provocative content inside.”

At the SPD awards, the “Oscars” of media design, Time’s cover had fans.

“I loved it. I thought it was fantastic,” said Arem Duplessis, the New York Times Magazine’s design director. “There needs to be more magazines that have the guts to do something like that.”

Time has done its fair share of commercial covers, though “not many are as provocative as this,” said design guru Luke Hayman, now at Pentagram, formerly of New York. “It’s great to see that it can do that; old Time, that’s been around for a long time, and they’re the ones who’ve gotten people to talk.”

He says magazines under new management often go through a period of experimentation, but he also credits Businessweek’s creative director, Richard Turley, with raising the bar for everyone else.

“He’s certainly ratcheted up the tempo and the kind of energy to experiment freely and wildly,” Hayman said. “This happens a lot with magazines under new ownership. There’s a new swell of energy and enthusiasm and possibility as new editors bring in new teams and it’s just this special moment when all these forces come together.”