Both the Times’ Sunday magazine and T The New York Times Magazine continue to shed advertisers. 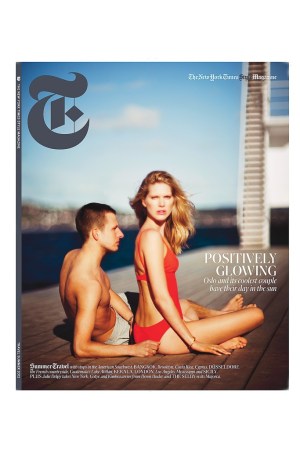 NO UPTURN: Sally Singer opened the most recent issue of T The New York Times Magazine with a tribute to leisurely evolutions. “You realize that even when taste is a given, patience is a virtue,” she wrote. Her subject was architectural renovations, but her editor’s letter could have doubled as a memo to her boss, New York Times executive editor Jill Abramson, who reportedly grilled her last year over declining ad sales.

Abramson won’t be much happier with T’s numbers so far this year as it continues to shed advertisers.

The luxury title lost ad pages in all but two of 2012’s first seven issues. The trend puts it out of step with most luxury and fashion magazines, which are overperforming as the luxury sector once again booms. And T rival WSJ. is also juiced up through the first four issues of the year, with more advertising than in the past and more pedigreed brands than those at its rival, said publisher Anthony Cenname.

While the Times’ Sunday magazine is also significantly down year-to-year through May 13 — 12.5 percent fewer ad pages, according to Media Industry Newsletter — it’s never had T’s mandate to bring in gilded buckets of luxury advertising cash. The loss casts a harsh light on the magazine, and especially on Singer’s nearly two-year tenure.

She came on board in 2010 and remodeled the magazine as a literary take on a fashion glossy. Recent issues have featured a travel piece by Thomas Beller, a regular of the Paris Review and the cofounder of the literary journal Open City, and a Middle East photo essay by journalist Trevor Snapp.

Under her watch, the magazine also has plateaued. Last year, it increased ad pages by 0.7 percent, according to MIN.

Seven issues into the new year, the numbers haven’t improved: The magazine is about 4 percent down in overall ad pages through May 20, according to figures from MIN and the Times. Its three fashion issues so far have all seen declines from last year, with a cover of Jessica Chastain notching a 10 percent drop.

The Times declined to make management or Singer available for comment. Through a spokeswoman, it said ad pages for May are flat compared to last year, and confirmed its upcoming seventh issue, focusing on travel, had a slight decline in pages.

“T remains a strong performer and it is an important part of The Times’ overall portfolio of products available to luxury advertisers to reach our affluent and highly engaged audience,” said spokeswoman Eileen Murphy.

She maintains the company’s luxury business is “robust,” pointing to advertisers Louis Vuitton and Dior, and counters that WSJ. often runs in-house ads and ones by the likes of Starbucks and Jeep.

Among fashion and luxury titles, the ad page figures make T an anomaly. With the exception of Harper’s Bazaar and Glamour — which are slightly down and flat for the year, respectively — the fashion monthlies are showing muscular legs through March, according to MIN.

Luxury advertisers are spending more money across the board, leading several publishers — Time Inc., Forbes and Bloomberg — to launch — or relaunch — magazines aimed at deep-pocketed readers.

WSJ., already cocky as it is — it dubs itself the world’s leading luxury magazine after four years in publication — has 51 percent more pages March through May than last year, said Cenname; the publisher did not include a new February issue, part of its increased frequency. Its March spring fashion issue has 50 advertising pages in all. The figures can’t be independently confirmed because the Journal doesn’t release magazine-specific data. It also did not disclose their ad rates.

Cenname said the numbers are helped by an increase in the weekend edition’s circulation, which has encouraged more advertisers to spend on the magazine. Some of those “Madison Avenue” brands that are inside: Audemars Piguet watches and Devi Kroell footwear.

Though a decision won’t be made until the summer, Cenname hopes to expand frequency again next year.