WWD takes a look at magazine covers from today and 25 years ago to see what's changed and what's maybe stayed the same.

The Clintons were having their first year in the White House. Barbara Streisand was on her first full concert tour. Supermodels were at the peak of their powers as the celebrity craze of major magazines had yet to solidify. It was 1994 and magazines were in their heyday.

Essentially the Internet before the Internet was a thing, there were a lot of magazines 25 years ago. A research report from 2005 put the number of monthlies and weeklies published in the U.S. at 11,000. Today, that number is just around 7,000, a decrease of about 40 percent.

Here, WWD compares magazines from 2019 to their 1994 iterations. From cover lines to photography styles to depictions of women in general, some things have certainly changed. 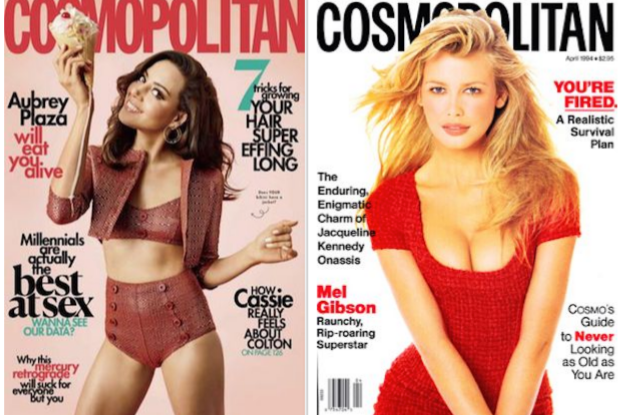 Looking through the Cosmos of 1994, the insistence of cleavage is the most striking. While a few of the covers this year show some skin, the magazine has largely moved away from the overt sexualization of its cover stars. 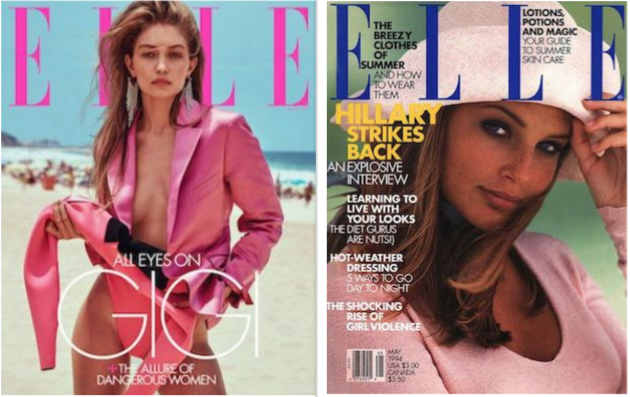 Elle had yet to be acquired by Hearst in 1994, but the magazine of today differs in a number of ways, most notably a cleaner look with very few cover lines and typically brighter colors that have taken hold. 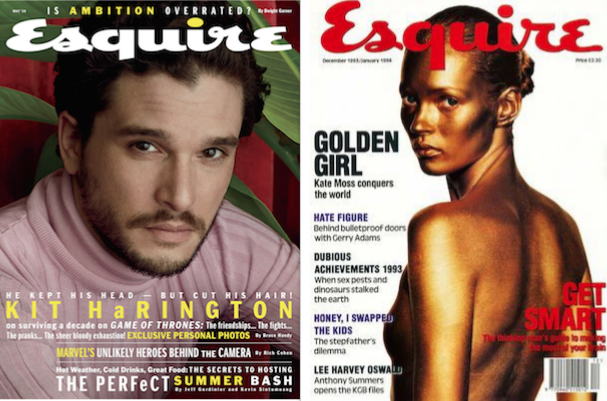 1994 was a time of transition for Esquire, as is 2019. Then Hearst had recently poached Edward Kosner from New York Magazine to run the title, and quickly turned to a white background to set it apart, along with featuring the occasional woman. Now, the magazine again has a new editor in Michael Sebastian, whose ideas for the publication are not yet apparent. Under his predecessor Jay Fielden, Esquire was focused on celebrity portraits. 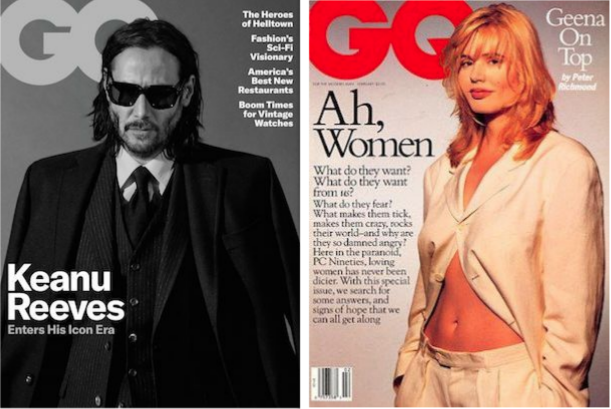 GQ, too, used to feature the occasional woman. It may be a better thing that it stopped considering a 1994 feature on the entire gender asked “What makes them tick, makes them crazy, rocks their world — and why are they so angry?” The cover went on to refer to the decade as the “paranoid, PC Nineties” and claimed “loving women has never been dicier.” One can’t help but wonder what Geena Davis, who had produced and starred in “Thelma & Louise” in 1991, thought of her profile appearing next to that. 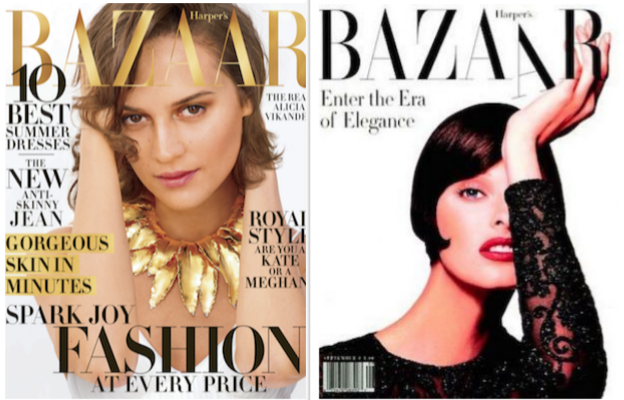 In something of a reverse of today’s trends, Bazaar in 1994 and under editor Liz Tilberis featured bolder cover images and fewer cover lines. Today’s issues, edited by Glenda Bailey since 2001 are more experimental, with frequent changes in backgrounds, cover lines and portrait styles. 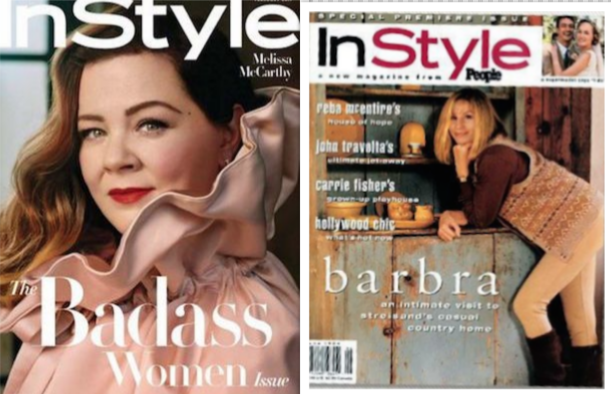 InStyle may be the most changed in the last 25 years. It actually launched in 1994 as a sister publication to People magazine, both then part of the now dissolved Time Inc. Nearly everything about the magazine’s overall look has been revamped, save for the typeface of the name itself. 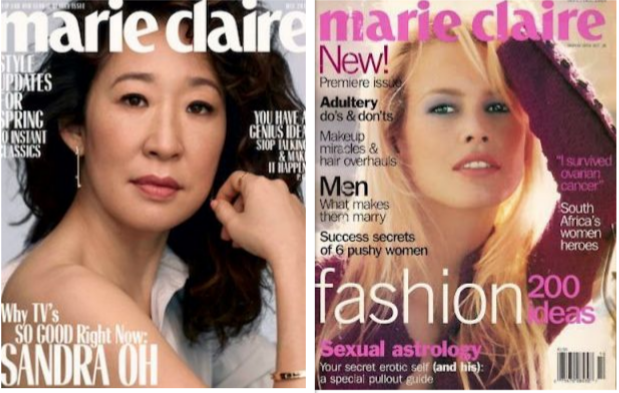 Marie Claire also launched its first U.S. edition in 1994 and its early cover lines read a lot more like Cosmo (“Adultery Dos & Dont’s,” “Men. What Makes them Marry”) Than today’s Marie Claire, which pitches itself more as a general interest book for professional women. It seems to have been a while since a guide to adultery or getting a man to propose was printed. 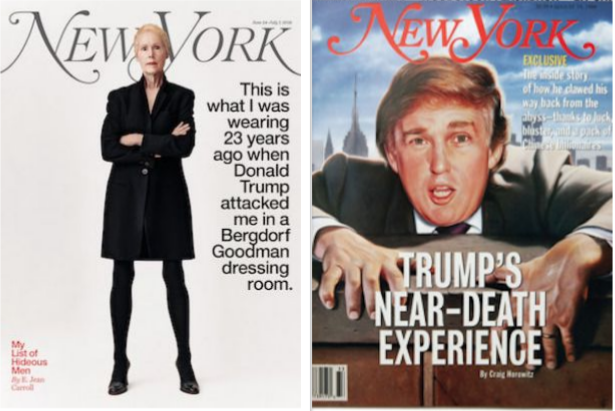 The overall look of New York Magazine hasn’t changed much over the last quarter-century, as it’s always looked different from one issue to the next. But the irony of a pre-president Donald Trump getting a cover story on how he “clawed his way back from the abyss” 25 years before columnist E. Jean Carroll got one accusing him of sexual assault is almost unreal. 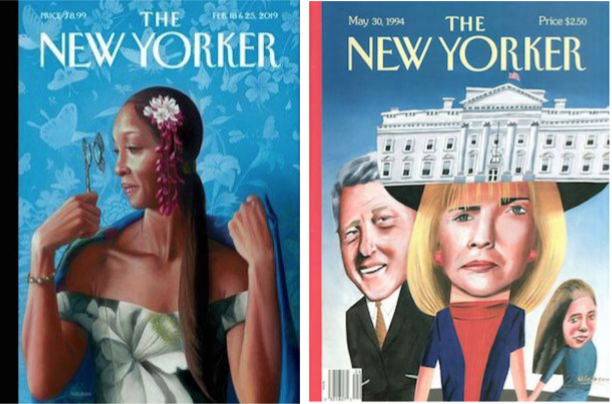 Similar to New York, The New Yorker tends to look quite different each week. It has always stuck to illustrations only, and although the subjects tend to always be very timely, they have recently gotten more graphic in appearance, at least on occasion. Some covers released online even come in gif format. 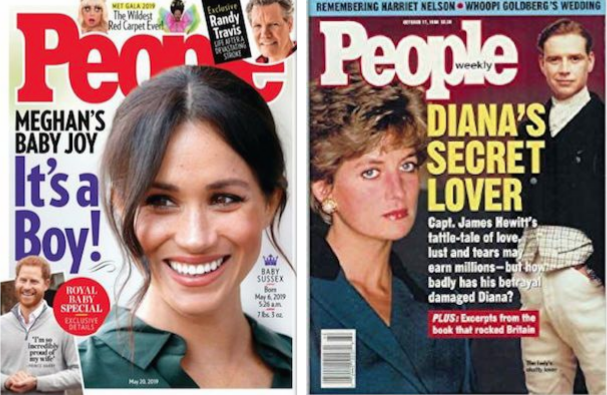 Surprisingly, People today is also quite similar-looking to its 1994 version. Its unique cover lines still include photos, giving a collage effect and it frequently even splits a cover to tease multiple features. The tone seems to have changed slightly to a less gossipy version that is more celebrity-friendly. 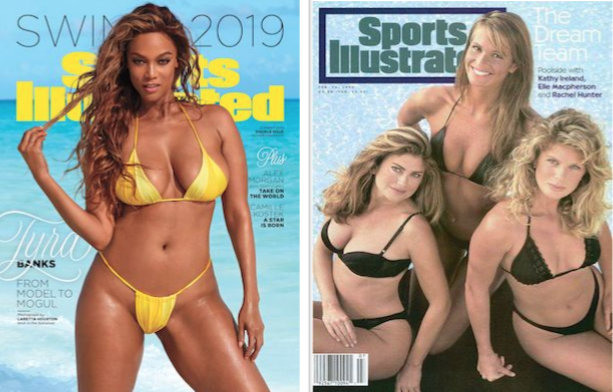 Swimsuits have of course remained in the swimsuit issue, but diversity has come to the annual Sports Illustrated issue. A little more polish has come as well. 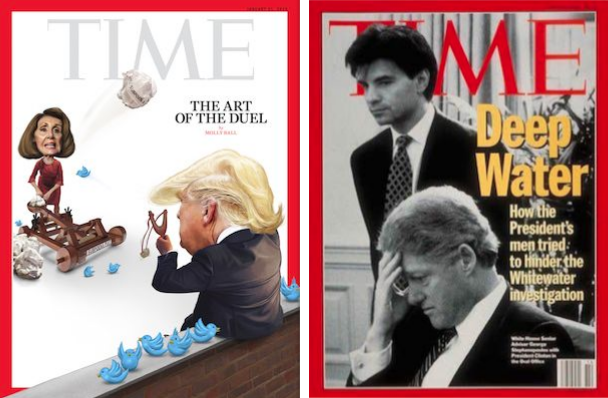 An illustration of Nancy Pelosi and Donald Trump in 2019 (left), Bill Clinton and George Stephanopoulos in 1994.

Politics and political issues are still Time magazine’s main source of cover fodder, but the modern version is cleaner and a bit less tabloidy in appearance than its 1994 counterpart. The magazine has also started to experiment more with different types of imagery, relying less on traditional photography. 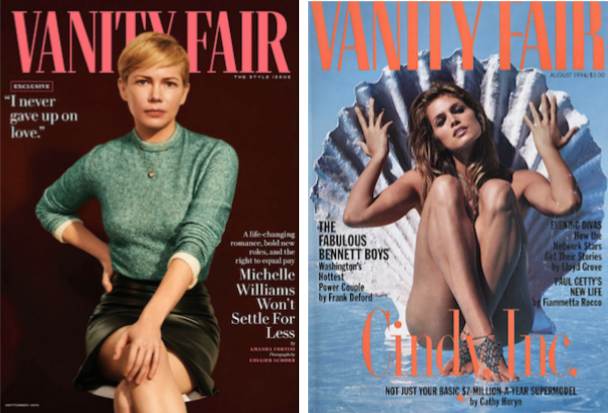 The Vanity Fair of today is a close second for most changed since 1994. Graydon Carter was only in his second year as editor then, but already had brought a certain panache to covering the very rich and very famous with a major feature on Cindy Crawford (complete with a unique Boticelli-inspired cover), Paul Getty and “Washington’s hottest power couple.” The version under current editor Radhika Jones is subdued and safe by comparison. 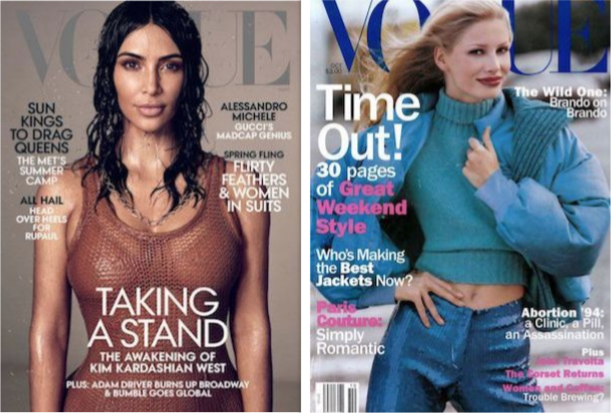 The only magazine here to have the same editor in 1994 and 2019 in Anna Wintour, Vogue is also much changed in 25 years. The magazine went headlong into the celebrity craze and has arguably legitimized the Kardashian-Jenner clan in fashion, but in 1994 there were still models on the cover and the focus was almost entirely on fashion and style. Today’s cover lines are generally an improvement, and the features generally more diverse, but today’s stream of the same omnipresent reality and pop stars makes one long for a cover with a new model in all blue.