No. 3: The Rise of Wearable Technology

This is the year that wearable tech drew a seat at fashion’s table. 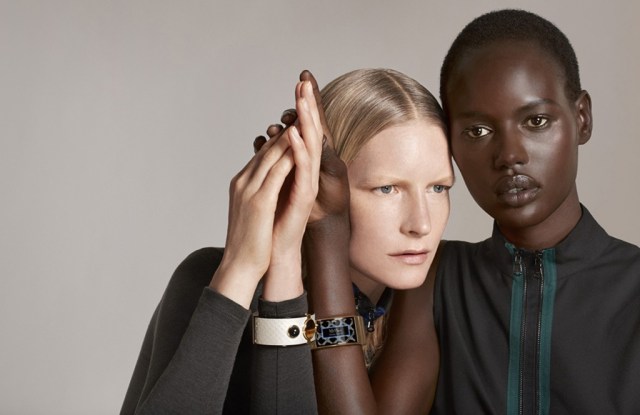 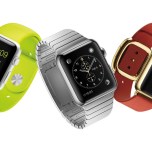 This is the year that wearable technology drew a seat at fashion’s table.

Wearable tech formerly had the reputation of being clunky, geeky, utilitarian. That was no way to make it into the mainstream. So tech companies large and small — looking to tap into a market-estimated 278 million units by 2017 and $30 billion in sales by 2018 — reached out to designers.

Google in June teamed up with Diane von Furstenberg, who designed five new frames and eight new shades for Glass, its eyewear that can search, navigate, share via social media, send messages and more. The collection, which offers customization opportunities, is sold on Net-a-Porter. It remains to be seen how successful Glass, which already is raising concerns about privacy and safety, becomes.

The wireless activity and sleep tracker Fitbit collaborated with Tory Burch on an accessories collection featuring a pendant necklace and bracelet made of brass based on Burch’s signature open-fretwork design, priced at $175 and $195, respectively. A silicone bracelet in Burch’s signature colors and prints is $38.

“From Day One, we’ve known that the form factor is crucial to creating a health and fitness tracking device that will fit into people’s lifestyles and become truly ‘wearable,’” said James Park, chief executive officer and cofounder of Fitbit. “Our partnership with Tory Burch has taken wearable-device fashion to another level, transforming our Flex tracker into an elegant accessory.”

Technology-savvy Rebecca Minkoff in September teamed up with Case-Mate to create a collection of tech accessories “that you’ll actually want to wear,” the designer said. A gold chain-link notification bracelet connects with a cell phone via Bluetooth to discreetly alert the wearer of calls and texts from chosen contacts. A studded lighting cable bracelet connects to a USB cable to sync and charge a mobile device on the go. “The key is that neither piece actually looks like wearable tech,” Minkoff added.

“Wearable technology products have to become objects of desire. That’s why Intel is interested in working with the fashion industry,” Steve Holmes, vice president of Intel’s new devices group, told the WWD CEO Summit in New York in October.

Intel has immersed itself in fashion, connecting designers who are members of the Council of Fashion Designers of America with a broad ecosystem of hardware and software developers it has cultivated. It brought together engineers and designers from brands such as Chanel, Cartier, Citizen, Kate Spade, Michael Kors, Tommy Hilfiger and Tory Burch. Intel teamed up with downtown retailer Opening Ceremony to develop My Intelligent Communications Accessory, a wearable-tech bracelet that comes wrapped in black snakeskin with pearls and lapis or white snakeskin with tigereye and obsidian. MICA is being sold for $495 at Barneys New York and Opening Ceremony.

The first product from Intel’s New Devices Group — BioSport earbuds that monitor the wearer’s heart rate — is intended to become a fashion accessory. The collaboration with 50 Cent and Carmelo Anthony’s SMS Audio will be sold at Henri Bendel, Kitson and Nordstrom, among other retailers. With this project, Intel will directly compete with Apple, which in May bought Dr. Dre’s Beats electronics brand for $3 billion.

The $53 billion Intel launched a Make It Wearable contest to find ideas that will change the future of wearable technology. And the company will repeat the program in 2015. First prize ($500,000) this year went to a wearable camera that attaches to the wrist like a watch and can fly, shoot an image from an aerial or other unique perspective, and return to the user like a boomerang.

Luxottica is positioning itself as a dominant player in the emerging field of technological eyewear. The company in March inked a U.S.-based agreement with Google for the consumer launch of Glass. The Italian eyewear designer, manufacturer and distributor, which counts Ray-Ban, Persol and Oliver Peoples among its house brands and Prada, Versace, Giorgio Armani and Polo Ralph Lauren among its licensees, recently signed a long-term deal with Intel for the research and development of high-tech glasses. The first product from the project is expected to make its debut in 2015.

Apple hired star industrial designer Marc Newson to work on the Apple Watch, launching next year. “He is extraordinarily talented,” Jonathan Ive, Apple’s chief designer, said, referring to Newson. A preview in Paris in September was carefully choreographed for maximum impact with a private viewing at Colette for designers and editors during fashion week.

“The fashion industry has an enormous amount to offer in what we do in industrial design because fashion is fast, fashion has its finger on the pulse,” said Newson at the Colette event. “There are very few creative industries that work on that rhythm.”

The Apple Watch is about options: it’s available in six metals including 18-karat yellow gold and 18-karat rose gold; six band designs; two sizes and 11 face designs. The watch sends and receives messages, tracks activity, accesses photos and performs many of the functions of an iPhone or Mac. There’s also WatchKit, a series of tools to help developers adapt existing apps to the Apple Watch.

Other tech firms are entering the smartwatch space, including Motorola, whose $250 Moto 360 launched in September. According to Citi Research, the market for smartwatches could grow to $10 billion in 2018 from $1.4 billion to $1.8 billion this year.

Apparel seems to be harder to infuse with technology than accessories, with tech firms such as Intel researching fabrics and fibers threaded with sensors. Ralph Lauren in August unveiled Polo Tech, a compression shirt that reads biological and physiological information using sensors knitted into the product.

Tommy Hilfiger also is experimenting with apparel. The designer recently released a limited-edition Solar Powered Jacket made with help from Pvilion, a company that finds innovative ways to harness solar power. The $600 jacket has two USB ports that can charge two devices at once, such as a smartphone and tablet, harvesting energy from solar panels on the back of the garment. The jacket has a blue nylon top and tartan plaid wool bottom.

It’s clear that when it comes to wearable tech, consumers want the best of both worlds: style that performs a function they care enough about.