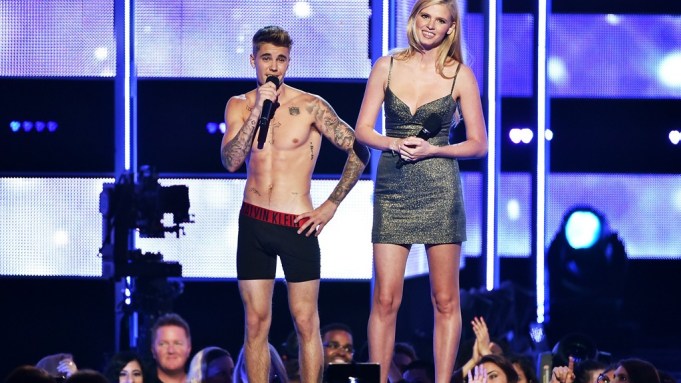 Justin Bieber in his Calvins was the star of New York Fashion Week.

Not only did Calvin Klein score the week’s most retweeted moment, when the pop star stripped down to his skivvies at the Fashion Rocks show, but the brand also topped rival labels that have larger social media followings by outpacing them in terms of engagement and reach.

Aside from the Bieber moment, Calvin Klein’s actual runway show was covered by 89 of the 3,264 bloggers tracked by Fohr Card during New York Fashion Week. Those bloggers published 494 posts that generated 9.7 million impressions, or 19,660 impressions per post.

That’s nearly twice the number of impressions per post seen by Marc Jacobs and 4,000 more than Ralph Lauren, the only two brands that eclipsed Calvin Klein in terms of total impressions tracked by the Fohr Card study. That’s also well ahead of the overall social media leader, Michael Kors, who saw 2.8 million impressions total, or 1,453 for each blog post.

“More people are talking about Michael Kors, but they aren’t getting people with a lot of reach to talk about them,” contended James Nord, cofounder of Fohr, a B2B platform that connects brands and bloggers and tracks relevant social media data.

Experts say, though, that it’s no longer about just having a substantial fan base. Instead, the key is the continued growth of engagement as well as acquiring new followers. Brands must figure out how to keep that momentum going.

“We like ‘likes,’ but we also have to evaluate our success in qualitative ways and strategize intuitively,” said Steve Shiffman, chief executive officer of Calvin Klein Inc., which is controlled by PVH Corp. “Instagram once again reigned as the platform of focus, and we embraced the consumer demand to tell a live, visually engaging story from all angles at all points in time.”

Calvin Klein’s success online stems from a concerted effort from the brand, which is led by an in-house team looking to expand its digital footprint.

And even though the digital world trumps all geography, the physical location of the catwalk seems to matter more than ever.

Nord maintained that images snapped on the runways at TriBeCa’s Spring Studios are far more pleasing to the eye than those shot at Lincoln Center. Now, designers and brands need to start thinking about staging their shows at places that are more “Instagrammable,” he said.

“Spring Studios is so beautiful. It has a lot to do with why shows there are doing a lot better on social,” Nord said. “It’s so pretty, with huge windows. It points to the fact that shows have to be able to be documented by people on their phones.”

But for all the hubbub of the shows, nothing beats a half-naked celebrity.

Calvin Klein’s post on Bieber’s disrobing saw 7,217 retweets — the most of any post during fashion week, according to Shareablee.

Even with Bieber, Calvin didn’t win the social media race across the board. Twitter reported that there were 1.2 million tweets overall mentioning #NYFW or related terms and that the designers with the most mentions were Michael Kors, Ralph Lauren and Alexander Wang. According to data from social media analytics agency Mashwork, the week saw 1.1 million tweets and more than 15 billion potential impressions. Of these tweets, 26 percent, or 288,565, contained emotional reactions to designers, collections and events.

Mashwork’s data also showed that Instagram saw 330,000 New York Fashion Week mentions from Sept. 4 to Sept. 11 — with 60 percent including the hashtag #NYFW, 15 percent with #MBFW and 25 percent that featured both. The overwhelming majority of Instagram content, or 94 percent, was images, while just six percent was video.

Calvin Klein’s Shiffman said that for the spring season in particular, the brand was driven from a creative standpoint to enhance its video presence. On the day of the show, an Instagram video captured by drone showed the space setup from an aerial perspective, and another video used Instagram’s new stand-alone Hyperlapse app to film a walkthrough of the space during show prep. The brand tapped Matt Baron to produce a series of five digital videos that started to roll out on Instagram the day following the show.

Different resources are used to elicit a dialogue online — from content created by and shared on Calvin Klein’s own digital platforms to engaging digital influencers, who in turn ignite conversations with their own followers. The brand also looks to paid media to help amplify conversations where necessary.

“Two years ago, you may have been buying digital ads, engaging bloggers and sharing on brand social media channels, but these elements were operating in silos that thwarted the potential to make a global impact on behalf of the brand,” said Melisa Goldie, executive vice president and chief creative officer at Calvin Klein, who maintained that social strategy today is a carefully calculated balance of owned creative content, paid social support and influencer activation.

Calvin Klein broke down its fashion week digital findings in terms of owned and earned media. The former — comprised of the online destinations the brand owns such as its Web site and social media channels — saw a 295 percent increase in engagement from the previous season in February. Analytics from Morpheus Media found that Calvin Klein reached 14 million fans across Facebook, Twitter, Instagram and Tumblr and generated 382,000 interactions during fashion week, up from the 10 million fans reached and 96,700 interactions that occurred in February.

The runway show on Sept. 11 was just part of the online conversation. On Sept. 8, Calvin Klein hosted an event to toast the release of its new men’s Reveal fragrance, and on the following evening was the exclusive sponsor of the Fashion Rocks concert at Barclays Center in Brooklyn. An image of Bieber in his Calvins posted to the brand’s Instagram page during the concert became the most-liked post of all time for the brand, and between Sept. 9 and 10, there were 55,000 #mycalvins mentions on Twitter, an 885 percent increase from the average daily #mycalvins mentions leading up to the event.

Fashion Rocks fared even better. Bieber’s disrobing to his Calvins fueled almost 95,000 tweets about the singer, Calvin Klein and the event. Fashion Rocks resulted in around 75 million impressions, with Azalea, Ferragni, Ora, Ambrosio and Hailey Baldwin leading the dialogue.

For the runway show specifically, the brand worked with 20 digital influencers from 10 countries — including Ferragni, Irene Kim and Helena Bordon. This means that Calvin Klein either dressed them to attend the show, cocreated content with them or gave them access at the runway show for prime coverage to share on their social channels. This group’s social media efforts, combined with that of digital influencers, VIPs and editorial outlets in attendance, reached more than 57 million fans and elicited 900,000 interactions. Just a year ago, reach was at 32 million fans and engagement at just 320,000.

The top three influencers for Calvin Klein during the week were Ferragni, Kim and Bordon, but Ferragni is far and away the brand’s most powerful driver of earned media. The Milan-based blogger’s posts on Instagram, Facebook and Twitter drove more than a third, or 35 percent, of Calvin Klein’s total earned media (based on the tracking of about 100 outlets).

Since the previous round of spring shows a year ago, Calvin Klein’s Instagram surged from 117,000 followers to 610,000 —accumulating 549,000 new fans since becoming active on the platform a little over a year ago.

Burberry, Kors and Lauren all have more total followers than Calvin Klein, even though Calvin Klein has the highest growth rate for fans acquired on the platform from Jan. 1 to Sept. 1. On average, Ralph Lauren’s fan base on Instagram has increased by 7.15 percent a month, Michael Kors at 6.97 percent and Burberry at 5 percent. Calvin Klein averages 18 percent growth per month.

While it’s too early to define a “social media ceiling,” some of the most successful brands in cyber space are starting to show signs of a slowdown in growth.

Michael Kors leads in terms of sheer number of fans. The brand has 15.7 million Facebook fans and 2.76 million followers on Instagram. According to data from a Goldman Sachs report, “Instagram engagement for Kors dwarfs that of every other fashion brand for New York fashion week.” The report shows that Michael Kors ranked first in terms of likes and total comments.

And while Fohr Card’s Nord notes that Michael Kors might have a less-engaged fan base, he explained that this might be a result of the brand performing so well in the social space for so long.

“The few that are really big become almost like institutions. The audiences do become a little less engaged because there are so many followers and they don’t feel as connected to the brands,” Nord said. “It’s kind of natural that people will feel like they don’t need to like the photos as much because by the time they scroll through it has 18,000 likes.”

Combined on all its social channels, Michael Kors has close to 21 million fans. About three years ago, this number was just 300,000.

Michael Kors senior vice president, global communications and marketing, Lisa Pomerantz, said social media is vital to the brand. It helps connect with consumers by bridging the gap between aspirational and accessible, as well as constantly engaging its Millennial audience with a “360-degree perspective.”

This season Kors also took on the most global reach to date, with customizable campaigns launching on China-based platforms WeChat and Weixin. Six days before the show, each platform engaged users with the designer’s All Access Kors creative experience. In addition to being able to view a live-stream of the show, users were encouraged to upload a picture of themselves (a selfie), which was then plastered along a New York City skyline.

“Our strong brand imagery along with Michael’s singular voice creates a unique perspective that is equal parts lifestyle authority and fashion friend — which is very Michael Kors,” Pomerantz said. “Product is at the core of our storytelling and NYFW allows us to inspire and get our fans excited for the upcoming season. They are buying now, but planning for spring.” Michael Kors the designer added: “It’s a constant dialogue with our consumers and what could be better than that?”