NYFW: The Shows Gets Under Way Today at Spring Studios

As IMG gets ready to kick off another round of New York Fashion Week: The Shows at Spring Studios Thursday morning, Leslie Russo, executive vice president of IMG’s fashion events, and April Guidone, vice president of marketing and brand strategy, chatted about IMG’s role in the semiannual event and the fashion universe, in general.

The first question is: Who’s actually running NYFW, the CFDA or IMG?

“The CFDA schedules all the shows on the official calendar. That’s their role and working with all the designers. We, at NYFW: The Shows, run the official centralized hub, which is here at Spring Studios and Spring Place,” said Russo.

Russo emphasized that IMG s role in fashion is “not just fashion week.”

“We are the entire eco-system of the fashion industry. We have IMG models, we have the Wall Group, we have Art & Commerce, and we have Focus, which is our production arm that produces shows and fashion events around the world for brand partners, designers, industry events and conferences. And of course, we operate and support other fashion events around the world. Fashion week itself is just one part of us sitting in the middle of the doughnut of all of that eco-system,” she said.

Russo said IMG produces the main footprint for NYFW: The Shows, and through Focus, their production house, they produce a good amount of the shows, such as the M Missoni flash presentation that took place in Los Angeles Tuesday night at Pink’s Hot Dogs.

IMG produces between 15 and 17 shows a season. Some of the shows have their own production teams, but they work with the designers in other ways, such as supporting them with back-of-house, bringing partnerships to designers and alignments, working with designers on digital media assets and live streams, as well as working with them beyond fashion week, from experiences to international opportunities.

This season, IMG has a full slate of programming, beginning with an in-depth conversation with Christopher John Rogers on Thursday morning. The audience for these panels (there are seven scheduled) are invited guests from the industry, press, buyers, designers and consumers. There are also weekend film screenings, a book signing by IMG model  Maye Musk, and a workshop with Visa, where five entrepreneurs in the financial/technology space will be pitching their companies to a panel of judges for a chance to win a $25,000 investment in their company. 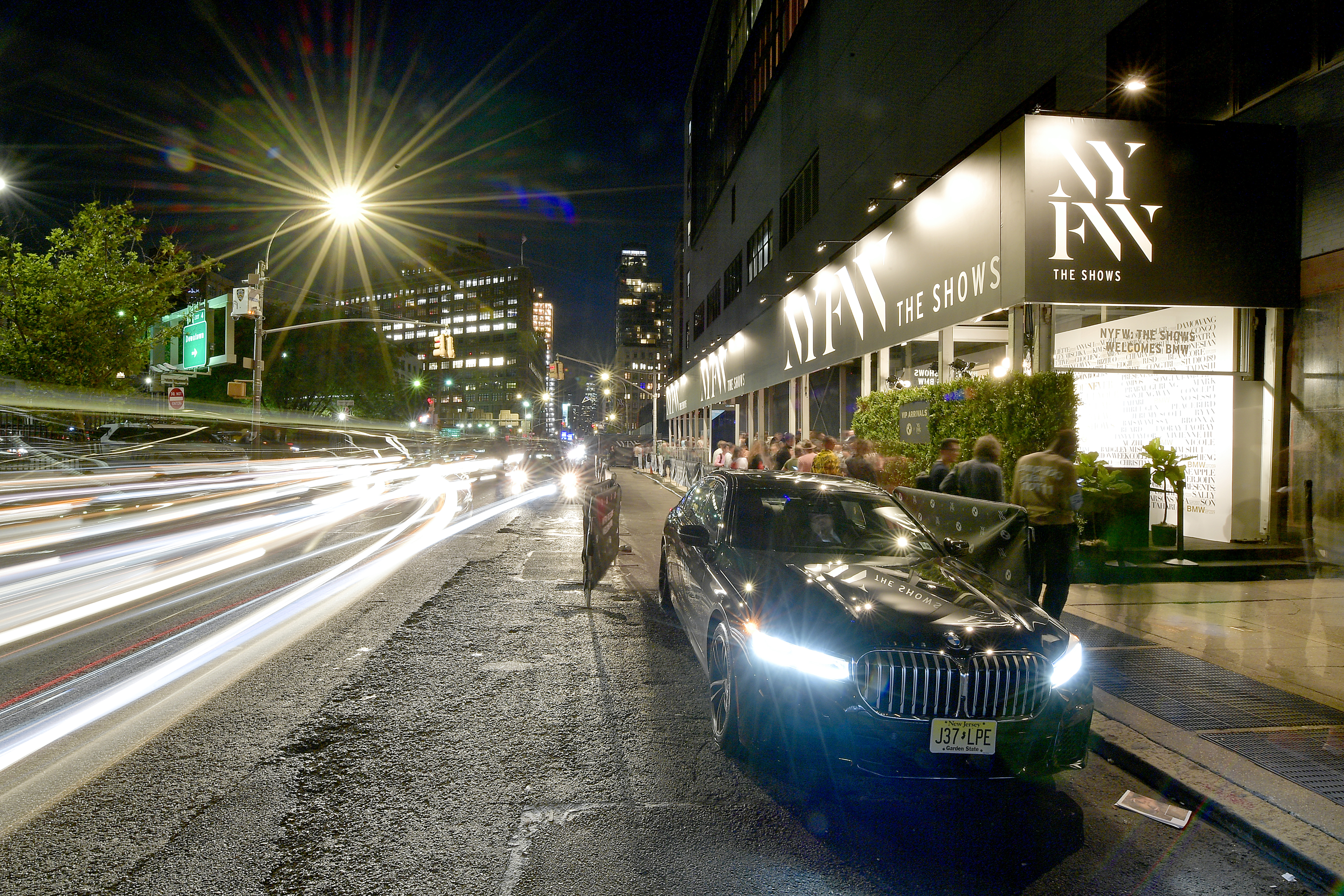 NYFW: The Shows kicks off today at Spring Studios, with BMW one of the key sponsors.  Roy Rochlin

“It’s two different things. We’re very respectful of the CFDA managing the official calendar for designers. That said, we are truly international and work internationally, and we do additional international showcases, and additional programming, and some designers opt to show the day before, if there are no additional slots elsewhere,” she said. She said IMG also works with designers who have off-site shows, not only at Spring.

Asked what a designer gets out of being part of IMG’s schedule, she said Rodarte, for example, is a WME client for their entertainment projects. They will be showing in New York at St. Bart’s Cathedral. “We’re working on a variety of opportunities, in terms of bringing partners to them, in terms of working through things like live streams. We’re going to do a dinner here on-site celebrating their show.” She said they’re also working with Christian Siriano, who’s showing at Spring Thursday night. “We’re working with him with both BMW and Warner Bros. [for the film, ‘Birds of Prey’),” she said.

BMW, which is a second-time sponsor of NYFW: The Shows, is a sophisticated marketer, she said. They are connecting this week alone in NYFW, the Oscars and Frieze Art Fair in L.A. “In the course of 10 days, they have really connected the dots of all these incredible cultural moments, which our talent at WME and IMG is at all three,” she said.

Inviting the public to fashion shows is another topic the executives addressed. Russo said as part of Endeavor Experiences, over the last several seasons, they have been testing the right formula to bring consumers to the fashion shows. “It is a very high-level vetted experience, which designers have the option if they’d like to use our infrastructure to having some of the tickets available to consumers,” she said. “It’s about bringing customers who spend money and buy clothes.” She said Marcus Wainwright at Rag & Bone and Siriano have been doing this for several seasons. The money from ticket sales goes to the designer.

As for whether NYFW: The Shows will ultimately relocate to The Shed at Hudson Yards, Russo said, “For years we’ve been asked [about the Shed], but it never came from us. That said, we’ve had talks with The Shed, and we’re supportive of them as a venue should any designers wish to show there, but in terms of the centralized hub, we feel that Spring Studios and the infrastructure of all their variety of spaces, is very conducive to how designers want to show and entertain over the course of the week.” NYFW: The Shows will be located at Spring next September, as well.

In response to what they’re most excited about for this fashion week, Russo said February is different than September, because of all the cross-over events: Super Bowl, Grammys, Oscars, Frieze Art Fair.

Guidone works with brands such as Visa, which is a sponsor of NFL, Super Bowl, NYFW: The Shows and the Olympics. This season they’re working with Visa on a yearlong plan for how to use fashion as a platform, and how to create a strategic crossover between all their initiatives, and bring fashion to those initiatives, and bring sports to NYFW. During NYFW: The Shows, Visa will present a panel discussion exploring the intersection of sports and fashion.

Russo said she works closely with Steven Kolb, chief executive officer of the CFDA, and is now working as well with Tom Ford, chairman of the CFDA.  “I’ve been here for five years, and I feel we’ve never been more in sync with the CFDA. We have regular meetings. We’ve been working closer and closer with them season over season,” said Russo. There’s a 71.2 percent crossover between the CFDA official schedule and NYFW: The Shows’ schedule.

She pointed out that fashion week is the number-one revenue-generating event in the tri-state area. “It’s more than Super Bowl, more than the U.S. Open and more than the New York City Marathon, it is a juggernaut for our economy,” said Russo.