The magazine streamed the star-studded party for the first time as part of its revamped Nylon TV Web service. 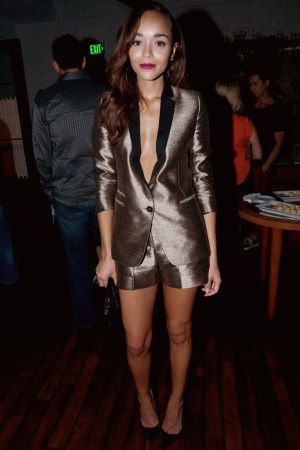 FULL OF GLEE: What better way to celebrate a TV print issue than with a star from the hit show “Glee” and the Internet? On Saturday, Nylon magazine unveiled its September issue at Mr. C Beverly Hills in Los Angeles with cover girl Lea Michele, who revealed the tactic she used with editor Marvin Scott Jarrett to land the coveted spot. “I pretty much begged Marvin to put me on the cover,” Michele gushed. “I’m so excited.” Michele spread her enthusiasm to other partygoers, including Alexis Bledel, Mena Suvari, Christa B. Allen, Elisha Cuthbert, B.J. Novak and Holland Roden. Nylon streamed the entire star-studded party for the first time as part of its revamped Nylon TV Web service. It didn’t stop there with the small-screen synergy. It also launched the new Sony X headphones designed by “The X Factor” judge Simon Cowell. As guests like Lucy Hale boogied to the Jackson 5 and Stevie Wonder throughout the night, others including Ashley Madekwe sat on the sidelines, pondering what to wear to the Emmy Awards on Sept. 23. “I have no idea what I’m wearing to the Emmys,” said Madekwe, who plays an impeccably dressed social climber on the hit soap opera “Revenge.” “I’m very indecisive so we’ll see.”