Barack Obama and family will be making the rounds on even more covers once the September issues of the monthlies hit newsstands. 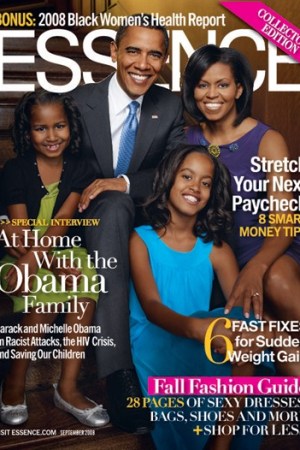 OBAMA PRESS TOUR: Barack Obama and family will be making the rounds on even more covers once the September issues of the monthlies hit newsstands. First, the entire family will appear on the cover of Essence for an upbeat story by PBS newswoman Gwen Ifill. The magazine nailed the exclusive interview and photo shoot with sister Time Inc. title People that took place in Butte, Mont., during the Fourth of July and at the Obamas’ home in Chicago in mid-June (People’s Obama interview and photo shoot ran in its Aug. 4 issue). Among the highlights in the Essence story, Ifill reports from the campaign bus as the family travels to Montana, and how they interact with supporters and with each other. “The Obamas pride themselves on creating a family picture that is authentically black with shades of Norman Rockwell,” she summarizes. Michelle Obama also discusses her family’s relationship to its neighborhood on the south side of Chicago: “For all of this wonderful madness that comes along with our lives — the Secret Service, the cars — there are kids on Forty-seventh and King Drive who can walk two blocks and be that close for the first time to somebody who can be the president of the United States. I love that,” she says.

The current issue of Ebony, meanwhile, features Michelle Obama by herself on the cover. She wore her own clothing for the shoot — including a suit from favored designer Maria Pinto. Though the story was intended to be a fashion profile of the potential first lady, whose style is becoming as closely dissected as her husband’s jump shot, creative director Harriette Cole said the story took a different turn once Michelle Obama encouraged Cole to take a trip to Chicago and speak to her inner circle of friends and family. The story ended up also covering the political wife’s relationship with her children and workout routine and included a two-page Q&A with Marian Robinson, Michelle’s mother, and quotes from friends and family including Eleanor Wilson, godmother to Malia and Sasha Obama.

This story first appeared in the August 5, 2008 issue of WWD. Subscribe Today.

And if you can’t get Michelle Obama for your cover, what should you do? Improvise — which is what Harper’s Bazaar has done for its September cover and a fashion spread, featuring Tyra Banks as first lady, wearing only American fashion, from Banana Republic to Badgley Mischka. “Michelle Obama, you’re one hot mama,” Banks proclaims in the story, adding she’d love to have Obama as a guest on her show. As for the ideal first lady behavior, Banks told articles/special projects director Laura Brown: “Oh, I want her not to take herself too seriously….She’d need to know how to take a fierce picture but at the same time be able to eat fried chicken, have grease on her fingers, and be OK with getting photographed like that, too.” — Stephanie D. Smith and Irin Carmon

MORE APPOINTMENT: Genevieve Monsma is More’s new beauty director — a reunion of sorts, since she worked for More’s newish editor in chief, Lesley Jane Seymour, at Marie Claire. She was most recently beauty director at Shape. Another Marie Claire alum already can be found in the pages of the September issue: former fashion director Lucy Sykes, who is mysteriously credited as Lucy S. in a well shoot. Sykes is a contributing editor at Cookie, but a spokeswoman for that magazine said that, since More was not a direct competitor in the parenting field, Sykes was free to style there. Meanwhile, More is raising its rate base to 1.3 million next year. The title’s redesign debuts in October. — I.C.

HOGAN’S HEROES: There’s a new “It” girl to add to the celebrity advertising roster: Dakota Johnson, daughter of Melanie Griffith and Don Johnson. This fall, she joins fashion-ad vets Leigh Lezark (Roberto Cavalli for H&M) and Elettra Rossellini Wiedemann (Bill Blass and Lancôme) in the new Hogan ads, shot by Jessica Craig-Martin. The backdrop? New York City — fitting, considering that fall serves as Thakoon Panichgul’s ready-to-wear debut at the Milan-based label. The spots ultimately find the trio, sporting tough-chic moto jackets and leather bags, lounging on the concrete lower-level steps of Manhattan eatery Morimoto. “We wanted to shoot on a stairway — not too nightclubby, not too domestic,” explains Craig-Martin in the behind-the-scenes video of the production that Hogan is putting up on its Web site. The ads break later this month in Europe, Asia and the Middle East — but not in the U.S. — Vanessa Lau